The US government has released rules on how the 2018 NDAA ban of Dahua, Hikvision, and Huawei will be implemented when it takes effect in 5 days.

While the release of the rule itself has been widely reported, the actual details within the rules have not. Inside this note, we examine the 44-page rules document, addressing key question such as:

This interim Federal Acquisition Regulation applies to section (a)(1)(A) of Section 889 of the NDAA - there is no rule yet for the 'blacklist' clause, which has been spun off and will be implemented one year from now. It is an 'interim' rule because it has not been published in the Federal Register yet. (CORRECTION: this is not accurate, as the rule is now on the Federal Register, but remains "interim". The "interim" moniker refers to the fact that the rule remains open for minor suggestions for 60 days, see below).

Products using Huawei HiSilicon chips are covered as section 4.2101 defines the ban to include:

Hisilicon's SOCs ("System on a chip") are an essential component of IP cameras and NVRs that use them as they host the operating system and core code necessary to run the camera. Below is an image example of Hisilicon chips on a Honeywell camera:

This will have a significant impact but should come as no surprise to those following the details. For example, this is consistent with what the Congressional committee which drafted the NDAA told IPVM last December:

Many manufacturers, beyond Dahua and Hikvision, use Huawei Hisilicon chips. For example, China's third-largest manufacturer Uniview generally uses Hisilicon. Many lower-end Hanwha cameras were using Hisilicon but Hanwha is now in the process of phasing them out. Most 'cheap' or inexpensive cameras use Hisilicon, etc. One notable exception is Avigilon who says they do not use any Hisilicon.

We would expect the US Security Industry Association (SIA) to fight this, as many of their manufacturers profit greatly from low-cost Hisilicon chips. However, claiming that SoCs are not 'necessary for the proper function or performance' of a video surveillance device is simply technologically wrong. On the other hand, they have done this before when they successfully campaigned for IP cameras to lose Buy America protection by arguing that 'IP cameras are capable of being employed without using the lens and image sensor'.

The rule states that "it is in the best interest of the Government to apply this rule to contracts for theacquisition of COTS items" [commercial off-the-shelf items], citing an "unacceptable level of risk":

Most video surveillance products bought by the US government are 'COTS' in that they are widely commercially available (e.g. Axis, Dahua, Hanwha, Hikvision IP cameras, etc. are widely sold online).

Contractors must include an NDAA notice - which discloses banned equipment - for all "solicitations issued on or after August 13".

Even if the government requested solicitations before the 13th, if the contract is awarded afterwards, the notice must be included:

Even with ongoing contracts, the NDAA notice must be included, barring further procurement of covered products:

In their NDAA notices, contractors must pledge not to supply covered equipment:

If they are including covered equipment, contractors must report it to the contracting officer or, for DoD contracts, directly to the DoD website:

Contractors must also disclose key details about the covered equipment, including whether "the entity was the OEM or a distributor":

However, these waivers can only be granted if there is a "compelling justification for the additional time [necessary] to implement" the NDAA ban and the contractor submits a "phase-out plan": 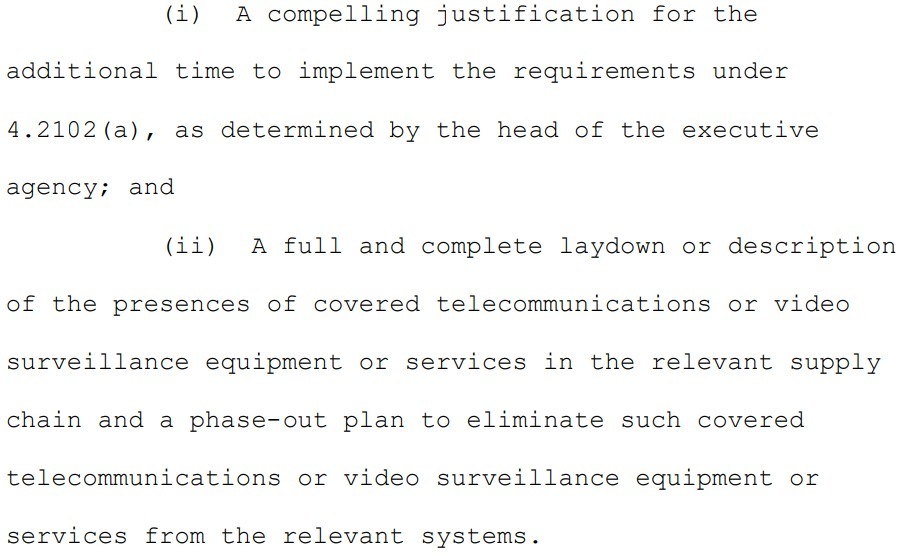 The only other way to get a waiver is if the Director of National Intelligence "determines the waiver is in the national security interests of the United States".

Generally, violating Federal Acquisition Regulations carries consequences such as "cancel[ing] the procurement" and "disqualify[ing] an offeror"; serious violations can even be referred to "appropriate criminal investigative agencies."

Hikvision Global News Reports Directory on May 13, 2022
Hikvision has received the most global news reporting of any video...
Chilean Official Investigated for Motorola And Hikvision Contracts on Sep 17, 2020
A corruption investigation is underway in Chile after a crime prevention...
Trade Groups Request NDAA Blacklist Delay Citing Coronavirus on Apr 06, 2020
Two trade groups representing government contractors have asked Congress to...
IFSEC Report: US Ban Hurting Hikvision In Europe on Sep 04, 2019
Prominent UK publication IFSEC Global has issued a new report finding that US...
How To See If Your Camera Uses Huawei Hisilicon Chips on Aug 30, 2019
Rarely do manufacturers disclose what SoCs (System on a Chip) they use, even...
NDAA Ban of Dahua and Hikvision Is Now US Gov Law on Aug 13, 2018
The US President has signed the 2019 NDAA into law, banning the use of Dahua...
Comments (24) : Subscribers only. Login. or Join.