The ESX (Electronic Security Expo) day 3 / Thursday is done and the exhibits are over. IPVM was in Nashville covering it in-depth.

It's Riskier To Be In The Alarm Industry Today

Michael Barnes [link no longer available] said that investors and buyers feel "it's riskier to be in the alarm business today" due to the changing competitive landscape, lower margins, and more attrition risks. As proof, he pointed to the price paid for ADT last year as well as Moni's share price.

Despite a pub crawl that ended after midnight, Thursday's educational sessions were very strongly attended, with standing room only at 8:00 in the morning. This continued all day, with even the final session at 4:15 PM being two thirds full.

At least people leaving the very last session of the day got a bit of recognition. It was goofy, but a fun and surprisingly heartwarming gesture.

The show floor was noticeably more crowded on Thursday than it had been on Wednesday, as lunch was scheduled for the center of the floor. 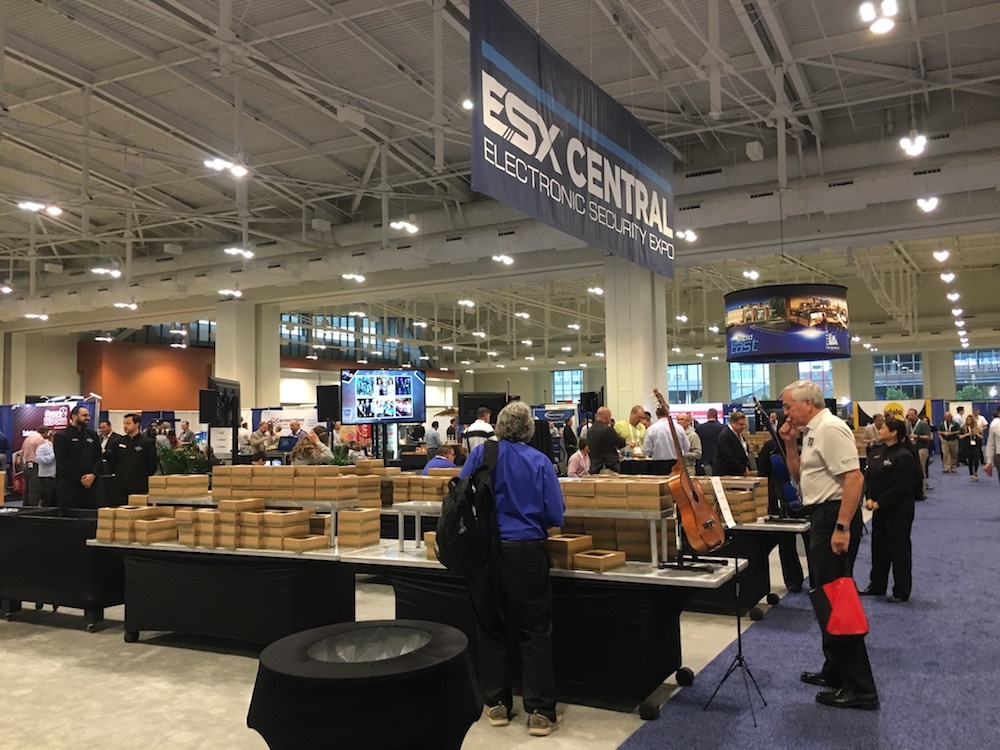 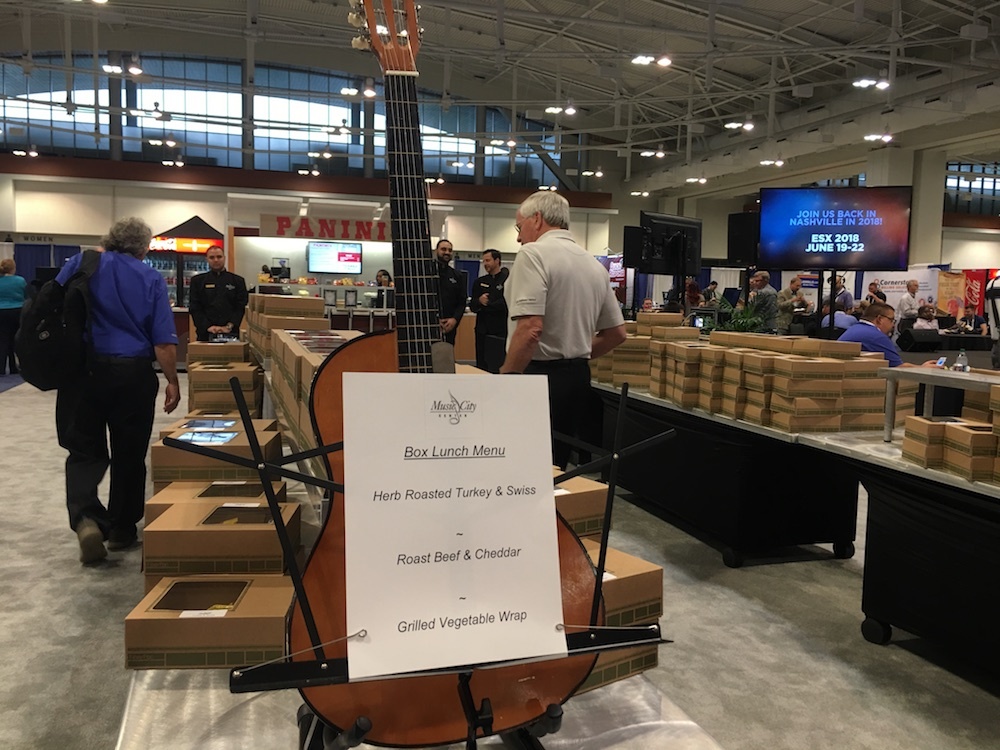 Many attendees stuck around to network and explore some booths, but the floor was quiet by 3:00. Several vendors with booths at the edges of the show floor did not bother to return for the second day, or had fewer employees in their booths. In contrast, the vendors in the first row and close to the entrance told IPVM that they had had a lot of traffic all day Wednesday, probably because there was food in the first row.

The opening breakfast was attended by over 450 people and featured a panel discussing the future of the alarm industry. 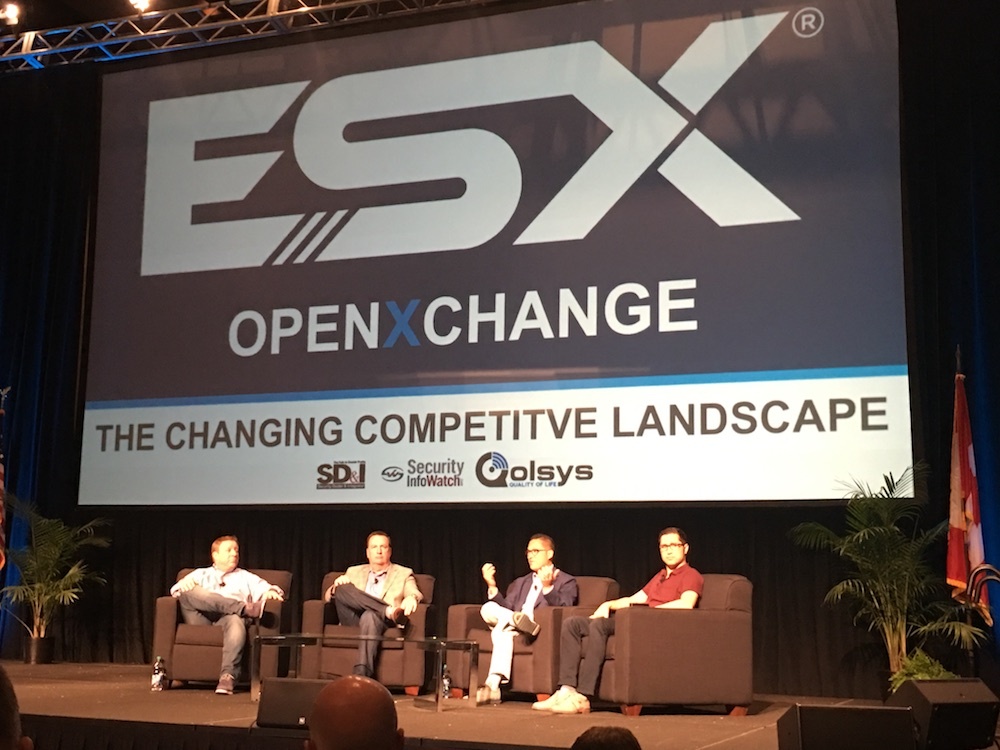 The panel was bullish on the future of IoT and its growth. For example, Honeywell said 10,000 Honeywell smart thermostats were activated on Christmas Day 2016, people must be giving them as gifts.

They say not to be scared of DIY because there will always be people who can't or won't do it themselves. At the same time, it is incumbent on the industry to "be experts" and "tell a story".

We are skeptical, to say the least.

Scott Harkins of Honeywell pointed out that consumers tend to ignore cyber security and privacy:

All the educational sessions IPVM was able to see were very well attended, with attendants controlling entry and closing the doors when rooms got too full. Attendees seemed satisfied with the quality of the education overall. Several attendees IPVM spoke to mentioned that the quality of education at previous ESX shows had been high, and that this year was no exception.

Exhibition Not Very Well Attended At All

In contrast, many of the attendees seemed to have little interest in the exhibition portion of the show. The exhibition was lightly attended, even with the limited hours of 12:45-5:00. Exhibitors seemed to have anticipated this, with even large manufacturers such as Dahua squeezing into a 10x10 booth. 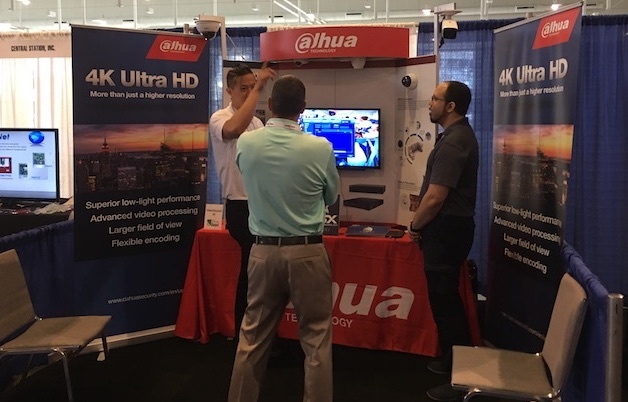 IPVM spoke to several exhibitors that were disappointed with the amount and quality of the traffic. Attendees mainly seemed to show up, say hello to a few vendors, claim any swag, and leave, with a noticeable dropoff in traffic after 2:00 PM. Possibly this is due to the amount of walking ESX requires, with the educational sessions, the keynote speaker, and the exhibition all on separate floors with entrances far from the escalators.

Rapid Response hired a country singer to entertain the crowd. Unfortunately, there was no crowd to entertain.

SIAC Hard Up For Funds, Asks For Donations

SIAC, a alarm industry group that lobbies against false alarm ordinances, finds itself low on funds despite its shoestring budget and low overhead. SIAC is funded entirely by donations from the industry, and recent industry mergers and acquisitions have caused previously reliable sources of funds to dry up. SIAC's Stan Martin appealed to ESA and TMA members for donations, and stressed the need for more money during the annual SIAC meeting.

You Must Raise RMR Rates Regularly

Small and steady increases of monitoring fees can have a significant impact on an alarm company's valuation. Alarm companies are traditionally valued based on 'multiples', or the monthly RMR income multiplied by a specific number of months (36x to 42x is the most common range). Therefore, an alarm company with many monitoring subscribers can increase their cash flow and valuation by increasing central station monitoring prices 1% to 3% on a regular basis. An increase so small is not likely to anger customers to the point where they cancel their service, but adds up over time in a big way.

Ideas offered were to notify customer service agents of a planned rate increase so that they could prepare to answer phone calls from customers, empowering customer service agents to lower or eliminate the rate increase if necessary to prevent a subscriber from canceling, sending invoices describing all the services provided by the alarm company so the subscriber can see the value behind the increase, and to offer electronic payment options. 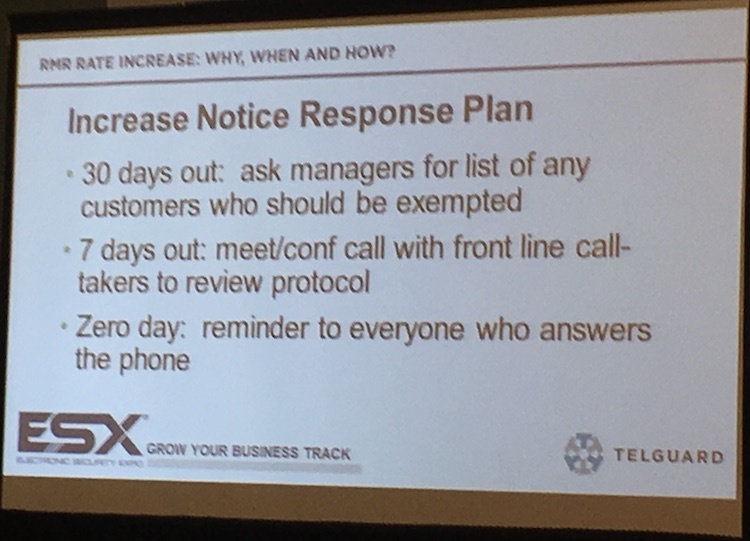 At their annual member meeting, The Monitoring Association vowed to fight efforts by fire departments to pass legislation mandating commercial fire alarms be monitored by fire departments instead of third party central stations. Schaumburg, Illinois recently passed an ordinance requiring all fire alarm to use a single central station at a cost of $100 per month, significantly higher than most fire alarm customers pay elsewhere. One local alarm installer compared the law to a "fireman's red light camera". Ostensibly, the purpose of this bill is to mitigate problems stemming from 'unreliable' fire alarms, although it is difficult to see how requiring fire alarms be monitored by the fire department would do that. TMA members fear that this idea could catch on elsewhere, as it could be a reliable revenue stream for local fire departments without openly raising taxes.

No Notice Alarm Monitoring Shutdown Due to Fiber Transition

TMA is working with the FCC to ensure that proper notice is given to subscribers before their copper is replaced, rendering their alarms unable to communicate. Copper network infrastructure is increasingly being replaced by fiber, sometimes with little or no notice. Legacy alarm panels may not be able to transmit signals to central stations over fiber. Now the FCC is proposing rules to speed up fiber adoption and potentially shorten or eliminate notice times where they exist.  Verizon has been particularly aggressive about replacing copper, sometimes leaving alarm monitoring subscribers unaware that their monitoring is no longer functional.

The website, called Get Into Security, is professionally produced and features videos that alarm companies can share on their websites and social media. Several ESX attendees IPVM spoke to mentioned that they were concerned about rising labor costs, caused in part by a scarcity of technicians and apprentices. A security integrator that has a social media marketing specialist could use Get Into Security to help with their recruiting efforts. Hopefully, ESA will promote the website themselves as well, as it does not seem to have gotten very many hits yet.

Trade associations such as the ESA are required by their bylaws [link no longer available] to hold annual meetings during which the association members vote on officers, vote on proposed changes to the bylaws, hear reports from the secretary, president, and treasurer, follow up on old business, and discuss new business. The process is familiar to anyone involved in nonprofit work. The process can be tedious, but is required so that members can ensure the proper governance of the organization.

All officers ran unopposed. This is generally because running an organization can be a lot of work, like having a second job, and not many people want to actually run for office.

All proposed bylaw changes, no matter how minute or trivial, must be voted on by the membership of any organization. These changes are usually as obscure as they are noncontroversial. And so, bylaw changes were proposed, seconded, and explained one by one, and then voted on, one by one. One TMA member voted no on one motion, just to be funny, causing the room to break into relieved laughter.