There are two fundamental types of gimbals used in dome cameras: 2-axis and 3-axis. For those unfamiliar, the gimbal is the mechanism on which the camera is mounted, that allows it to be tilted and rotated along axes for aiming. This video reviews the differences between 2-axis and 3-axis gimbals on two minidome cameras:

This third axis allows for corrections if the camera is not mounted level with the horizon. Most commonly this is used to adjust domes mounted to sloped ceilings for proper angle. However, it also speeds up installation when the camera is mounted flat to a wall, since the installer does not have to be concerned with which end of the camera is up.

Using a camera with a 2-axis gimbal on sloped ceilings may require a pendant or electrical box mount, both of which impact aesthetics and may be unacceptable to some end users.

Gimbal type can be found on camera spec sheets, though how it is shown varies. This is shown in these two examples, from Bosch and Hikvision (top/bottom): 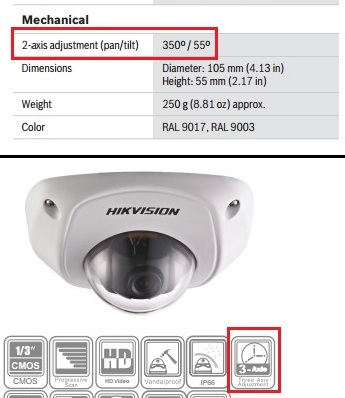 There are two basic methods for wall mounting domes, both of which have their place depending on the environment and desired FOV:

Flat: This method mounts the bottom of the dome flat to the wall surface, without any external mounts, shown here: 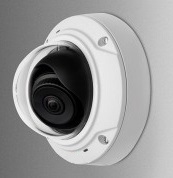 Wall arm: This type of mounting requires a wall arm of some sort be used, either from the manufacturer or third-party. These mounts are available in different lengths and styles, with a typical mounts shown below:

First and foremost, the desired field of view impacts which mounting method to use. Cameras with a 2-axis gimbal may simply not be able to be oriented to capture the needed FOV if mounted flat to the wall. Even some 3-axis cameras may be unfit for the scene due to limited pan or tilt ranges. Both of these issues would require wall arms be used.

Aesthetics is the most subjective issue in wall mounting and may be most frustrating. Some architects and end users will not allow pendant mounts to be used in their facilities or designs. Others feel that mounting the dome flat to the wall is odd-looking or cheap, like the camera was not intended to be mounted this way and the installer cut corners. This decision is purely preferences.

The cost of wall mounting using pendants is undeniably higher. The mount itself adds cost, usually in the range of $50-100. Labor increases as well, since instead of simply mounting the camera to the wall, the mount must be secured to the wall, then cables fed through it to inside the wall, then the camera secured to the mount. This is likely not a large amount of time for a single camera, but over the course of a multi-camera installation, it does add up.

When ceiling mounting cameras, one of the biggest installation questions surface vs. recess mounting. Again, both have advantages and disadvantages.

Surface mounting is substantially quicker, since no large cutout need be made in the ceiling. There is also much less risk of surface damage, whether it be ceiling tile or drywall, which may be costly, if tiles need to be replaced or patching and painting required. However, some end users will not accept the aesthetics of domes mounted to the surface of their ceiling, when instead they could be recessed, with only the lower dome exposed. This is typically less of an issue with minidomes, as they are considerably smaller than full size domes, only about 3-4" in diameter on average.

Though the aesthetics of recessed cameras are generally considered superior, this method has challenges, as well. First, installers must use plenum-rated housings where applicable which we discuss in detail in our update regarding plenum and UL listing issues. Second, recessed housings add additional cost. Some may be as little as $50, while other, plenum-rated housings may be up to $200.

No matter how the camera is mounted to the ceiling, one oft-overlooked consideration is support of the drop ceiling tile. Most full size or vandal dome cameras are heavy enough that they will eventually cause the tile to sag if mounted in it or on it without support. However, this is less of a concern with many compact minidomes, which are lightweight, about half a pound.

There are multiple ways of accomplishing this, but most common is the use of wooden furring strips across the top of the tile, resting on the drop ceiling grid. The camera, if surface mount, is screwed through the tile into the furring strip, or the recessed mount is attached to it. Some contractors have also taken to using channel rails or tile bridges used for ceiling speakers for cameras, as well.

We've included the examples below to show differences in three different mounting locations: ceiling mount, side wall, and end wall. Each of these (with one exception) captures the whole hallway, but there are nuances in field of view to be considered.

First, we mounted the camera at the ceiling, about 9' above the floor. As can be immediately seen, due to its limited tilt range (55°), the camera captures only to about 4' above the ground at the end of the hall, missing facial details of subjects walking past or into the office to the right. This issue is not present with either wall mount methods.

However, this method provides a good sense of directionality, with the ability to see the hall to the right, conference rooms to the left, and office at the far end of the hall, some of which is lost when mounting the camera to the side wall.

In this example, we located the camera at the end of the hall flat against the side wall, about 9' up. Mounted this way, the camera captures the whole hallway and is able to see some activity in the two rooms to the left, as well. However, it is unable to see a hallway to the right as well as an office door at the end of the hall. Centering the camera, either ceiling mount or mounted to the end wall, alleviates this issue.

Finally, in this example, we located the camera at the end of the hall, mounted flat against a drywall soffit which runs across the hall. In this location, we gain the benefits of ceiling mount, being able to better sense target direction, while eliminating the limitations at the far end of the hall. For cameras with limited tilt range, common in compact minidomes, this is the preferred mounting type.

Outdoor Camera Installation Guide on Mar 25, 2019
Outdoor camera installation can be fraught with problems. Creating a sturdy...
Four Major Outdoor Camera Install Problems on Jun 14, 2018
Over 140 integrators told us the top four camera installation mistakes that...
Camera Form Factor Guide on Mar 16, 2018
When selecting surveillance cameras, users may choose from a number of...
Comments (4) : Members only. Login. or Join.