D-Link is not happy.

Over the last two years, upstart Dropcam has received a ton of coverage from dozens of publications, including IPVM (see our 2 Dropcam tests - original camera and new 'Pro' camera).

So, who is better for home use? The incumbent D-Link or the upstart Dropcam?

In this report, we decide, doing a test of D-Link's 720p DCS-2132L [link no longer available] and contrasting that to Dropcam. Beyond the normal video and bandwidth analysis, we focus on two key areas of importance for consumers:

Here's how D-Link stacks up against key competitor Dropcam on major usability factors:

Here are other key findings from this test:

Dropcam is a lot easier for the non technical consumer than D-Link. The only clear advantage for D-Link is its offering of multiple form factors.

If you are recommending something to a friend or family member (and do not want to be dragged in to hours of free technical support), Dropcam is clearly the way to go.

If D-Link improves recording management (like shipping with a pre-formatted, ready to go SD card, improved search UI, integrated downloading), it could become a very attractive alternative to Dropcam.

In this screencast we review use of the mydlink portal for viewing and configuration:

This video shows the challenges of using the DCS-2132L's SD card functionality:

We take a look at the physical construction of the DCS-2132L in this brief video:

We compared the D-Link DCS-2132L to the ACTi D11 and Geovision GV-UBX1301 to measure image quality against similar fixed lens 720p cameras.

We did not compare image quality to Dropcam as the vast difference in FoV (D-Link narrow, Dropcam wide) makes comparisons difficult to be meaningful.

In full light, the DCS-2132L is moderately overexposed, washing out the chart around line 6 and below.

In low light, the DCS-2132L is much noisier than the UBX1301 due to its much weaker IR illluminator, making it difficult to discern details in our subject and chart. 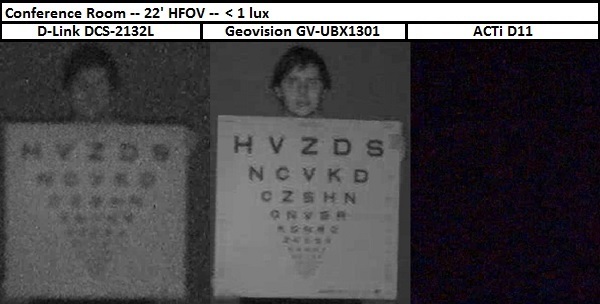 Finally, we tested the D-Link's IR range at various distances from ~3-22 feet. Past the claimed IR range of ~15' (5m), it was difficult to discern characteristics of our test subject. At 15', our subject is more noticeable, but we cannot discern a face. At ~9', we can begin to see our test subject's face more clearly due to better IR power. Very close to the camera, only about 3' away, our subject is clearly visible without overexposure.

Bandwidth was quite high compared to other cameras tested with the same resolution.

The D-Link DCS-2132L defaults to VBR, or "fixed quality" as it is displayed in setup. We kept FPS set to the default 30 FPS, using H.264 codec, and ran bandwidth testing in our conference room scene.

Strangely, in full light, frame rate was actually 40 FPS, faster than was set, while in low light, it dropped to 16 FPS. Q-level remained at ~27 in both full light and darkness.

Note that lower resolution streams (480p and 240p) are served by default for web viewing.

Take this 7 question D-Link vs Dropcam quiz to make sure you got the key points of this test.

FLIR FX Tested on Apr 08, 2015
FLIR is going after the home / consumer surveillance market with their FLIR...
Comments (11) : Subscribers only. Login. or Join.