Testing Day vs Night With IR

When it gets dark, especially real dark, with no nearby artifical lighting, pretty much every surveillance camera (even 'super' ones) are going to deliver significantly degraded images (see: Super Low Light vs Integrated IR Shootout).

Because of that, IR use in surveillance is growing robustly and for good reason.

However, how good is IR?

Specifically, we wanted to know:

Quality with IR at night falls in between day time and non IR night video. IR at night video quality was consistently worse than day time video, even with ideal IR illumination conditions. However, IR was still significantly better than non-IR dark scenes.

More megapixels does not typically deliver as much benefits with IR on as it does during the day.

Expectation management is key: Even with IR, do not expect to get the same quality at night that you do during the day. In particular, if you are calculating PPF / pixel density, factor this in.

Secondly, if night / dark scenes are important, this may be a reason to go for lower resolution cameras (not to waste at night) or to see if you can use a lower resolution at night (either binning or changing resolution on a schedule).

Here is one example of a 5MP camera, where we tested lights on / lights off from the full 5MP max down to VGA. 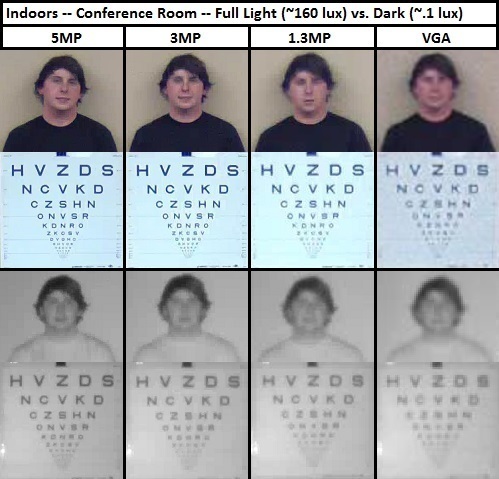 One clear pattern is that the day scene is always notably better than the night scene, despite IR being on.

Here is a 3MP camera with the same test pattern applied: 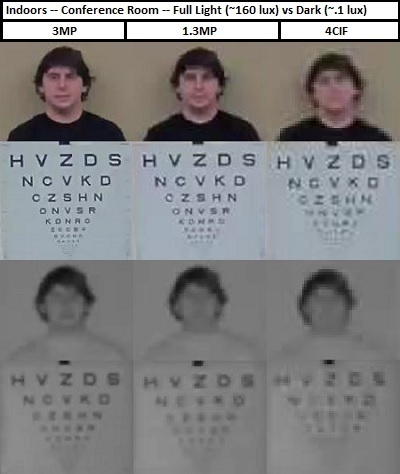 Like the first, a notable quality dropoff between day and night. 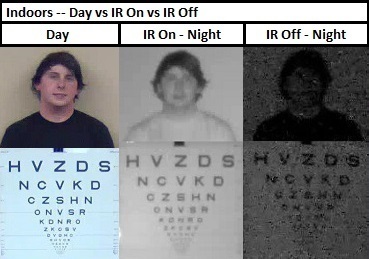 In this comparison above, we used a 'super' low light camera at 0.1 lux ('lights out' scenario). Certainly, how dark a non IR camera will be depends both on the specific light level (maybe there is 3 lux in your scene instead of 0.1 lux) and the sensitivity of your camera (maybe you have a poor low light camera or a high f number lens). However, this does reprsent a common pattern of IR at night being better than night without IR, but still worse than day time image.

These examples show IR in a 'best case' / properly used scenario, where the IR is within range and is even.

Results would be worse if:

All of this should be factored in when using IR or evaluating whether to add traditional lighting.

Comparison images in this report show a single camera at a time, at varying resolutions, with field of view and other settings remaining static throughout the test. This method mitigates variances within each camera caused by changing FOV and focal length. Additionally, performance variances between different manufacturers' cameras due to components such as sensor, DSP, etc. are removed.

Cameras were tested indoors in a ~25' horizontal field of view in order to keep PPF relatively high (~76 at 1080p/~50 at 720p) and fine differences observable. The findings in this test also align with observations from past tests, and comparisons in our shootout of Pelco's 5MP Sarix IR bullet.

Finally, cameras were tested using default settings, with exposure standardized to 1/30s and quantization set to ~28. Three different manufacturers' cameras were used in testing. Light levels were about 160 lux in full light and ~0.01 lux with lights off and IR on.