In super low light, an area that the West has long dominated, can the Chinese manufacturers beat their Western rivals?

We bought one, the Dahua Starlight IPC-HF8281EN and put it to the test against Hikvision's 1/2" Darkfighter as well as top low light performers from Axis, Bosch and Samsung.

Here is a preview of the low light results:

The Dahua 1/2" Starlight camera's low light performance was slightly behind Hikvision's 1/2" DarkFighter 6026 when using a standard F1.2 lens, but outperformed all other 1080p low light cameras tested, as well as the Bosch 5MP starlight model.

WDR performance was slightly worse than competitive 1080p WDR models against strong backlight with slight overexposure, but similar to or better than others in dark areas of the scene.

Bitrates in low light (~0.01 lux) were moderately lower than Hikvision's DarkFighter model, even with Hikvision's H.264+ smart CODEC on.

The camera integrated with Exacq, Genetec, Milestone and Avigilon VMSes.

The IPC-HF8281E sells for ~$285 USD online, not including lens, an additional ~$150. Note that we do not recommend Dahua's starlight lenses due to relatively high F stops (below).

At about $435 USD for camera and lens, Dahua's starlight 1/2" model is one of the lowest cost super low light models available, comparable in price to lower resolution 1/3" imager models like the Samsung SNB-6004.

The Dahua 1/2" starlight HF8281E is a superior choice for low light imaging without integrated IR. At half the price of competitors' super low light options, but performance similar to the Hikvision DarkFighter 6026 and better than other tested competitors, it is well worth considering in low light scenarios.

The Dahua HF8281E is similar in size and featureset to most box cameras. In the video below we review the physical construction of the camera and compare to the Hikvision 6026 DarkFighter model. Notably, the optional Hikvision lens is much larger than most, though the cameras are nearly the same size.

However, both have relatively high F stops, F1.4 and F1.6, compared to F1.2 or 1.3 found in many 3MP rated lenses. Because of this, we used a standard Computar M13VG288IR [link no longer available] 1/2.7" 3MP F1.2 model, recommended by many manufacturers. Beware when using smaller format lenses on 1/2" imager cameras, however, as vignetting may occur at short focal lengths.

The IPC-HF8281E performed performed slightly worse in low light compared to the Hikvision DarkFighter 6026 when using the F1.2 lens, with increased digital noise and dimmer images. However, it performed much better than the Axis Q1615, Samsung SNB-6004, and Bosch 5MP starlight, none of which provided usable images of our subject. 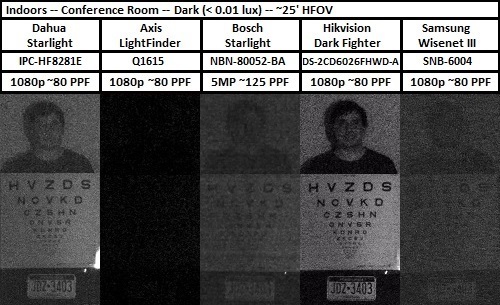 Using the Hikvision F0.95 DarkEye lens, images are brighter than even the Hikvision DarkFighter at the same light level, with 3-4 more legible lines of the test chart. However, the subject's face remains obscured by noise. 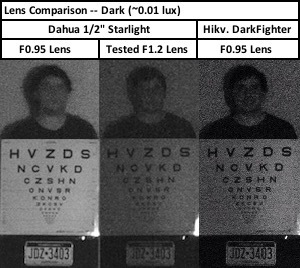 We tested WDR against our typical open overhead door scene: 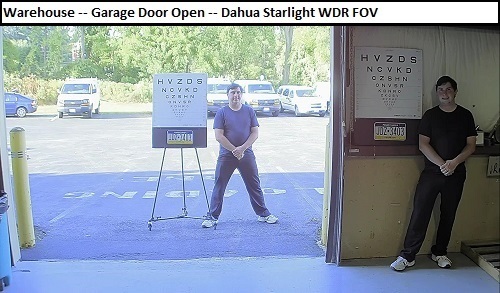 The HF8281E performed worst of cameras tested against the strong backlight of the open overhead door, with slight overexposure of our subject, though his details are still clear. In the dark area beside the door, it was the strongest performer, with clear images of both subject and chart. 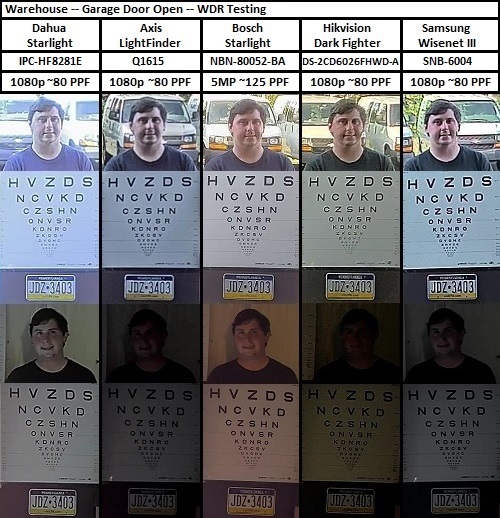 Dahua's 1/2" starlight model performed similarly to other models in full light, with no notable issues. 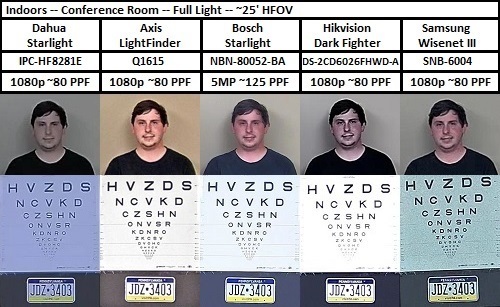 Dahua's 1/2" starlight model's bandwidth consumption was moderately higher than competitors in full light (Smart CODECs off), at about ~2.4 Mb/s (compared to ~0.6-1.5 Mb/s in competitors). Turning Zipstream on in the Axis Q1615 and H.264+ on in the Hikvision 6026, their bitrates drop to only a fraction of Dahua.

However, in low light, its bitrate is lower than Samsung, as well as Axis and Hikvision with their smart CODEC settings off (Zipstream and H.264+). Turning these on, the Axis Q1615's bitrate drops below the HF8281E, but Hikvision DarkFighter remains higher.

Dahua does not include Smart CODECs in any of their cameras. 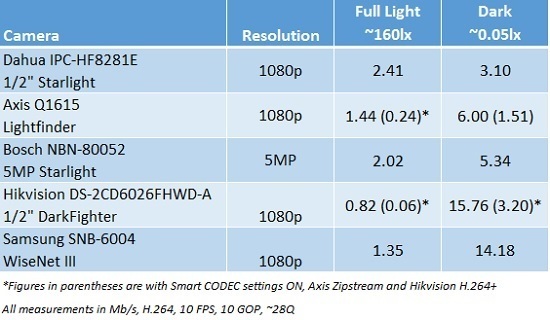 Testing Samsung 1/2" Wisenet III Camera on Dec 01, 2015
Continuing our series of 1/2" super low light tests, in this report we look...
Testing Axis' 1/2" Q1635 Camera on Nov 23, 2015
Low light performance continues to improve, first driven by advances in image...
The Siliconization of Surveillance Cameras on Oct 29, 2015
This is an insightful observation from Vicon's CEO Eric Fullerton [link no...
Comments (26) : Subscribers only. Login. or Join.