4K is here, but not without issues.

Now Dahua, one of the two Chinese mega-manufacturers, known for its incredibly low-cost HDCVI line, has entered the 4K market, with an IR bullet, that is a fraction of the cost of 4K offerings. 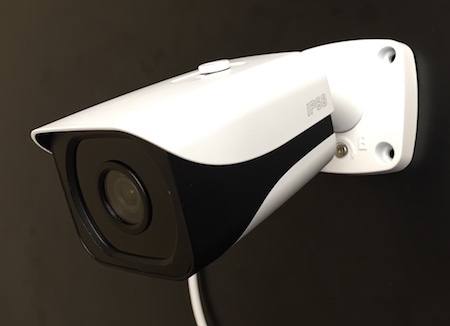 At such low prices, can Dahua's 4K deliver? Can it match the image quality of bigger brands like Axis and Bosch?

This chart summarizes the key findings from this test:

However, products purchased through these channels may not receive tech support or warranty. Dahua lists aliexpress.com as unauthorized [link no longer available], though Alibaba.com is not explicitly mentioned, and attempts to clarify this issue have been unsuccessful. As a general rule, buyers should expect limited, if any tech support and warranty service from these sources.

The Dahua IPC-HFW4800E improves upon low light problems seen in other 4K cameras tested due to its built in (though limited) IR illuminator. Further, WDR performance was solid, better than the Axis P1428-E and near that of the Bosch 4K Dinion. And these features come at prices close to competitive 1080p bullets, making the jump to 4K much more budget friendly.

On the negative side, this Dahua 4k camera lacks on-board storage, audio, I/O, and varifocal support.

In this video, we review the physical construction of the IPC-HFW4800E, fairly typical in size and feature set for compact bullet cameras.

Note: this video reviews issues specific to the HFW4800E only. For a general review of the Dahua web interface, see our Testing Dahua Cameras report.

The Dahua IPC-HFW4800E defaults to "Auto" for exposure and gain control, which results in dark images, despite built-in IR. 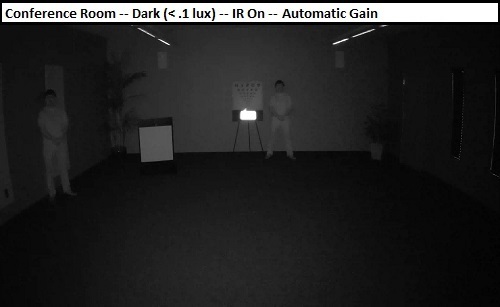 Increasing gain to a customized range with a max of 100 (found in the "Conditions" menu, see screencast above) allows the camera to apply more gain as needed, moderately brightening the scene, displaying more detail. 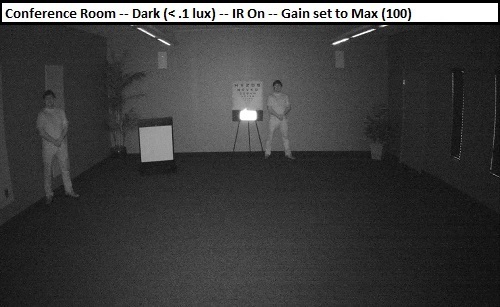 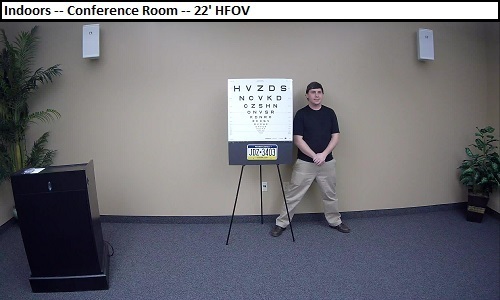 In full light, ~160 lux, image quality is similar in the three 4K cameras due to their extremely high PPF, ~175. The 1080p bullet provides fewer details of the chart, but still easily captures the license plate and subject's facial details. 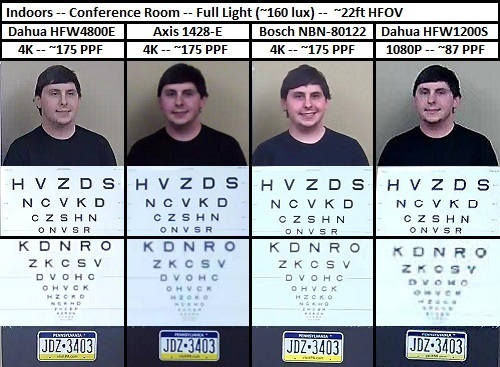 In the same field of view at ~.1 lux, both IR cameras deliver significantly better details than either Axis or Bosch 4K models. The Dahua 4K HFW4800E is noticeably dimmer than the 1080p HFW1200S, but still provides better chart legibility and roughly similar facial details. 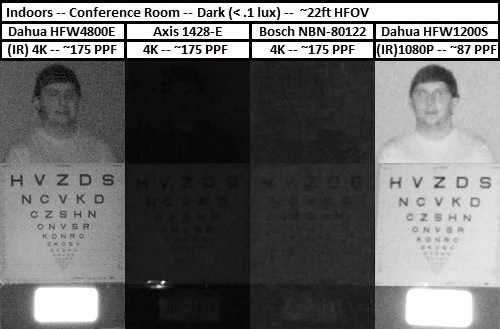 Next, we moved to a ~67' FOV, moving our subject further from the cameras, still under office lighting, shown here: 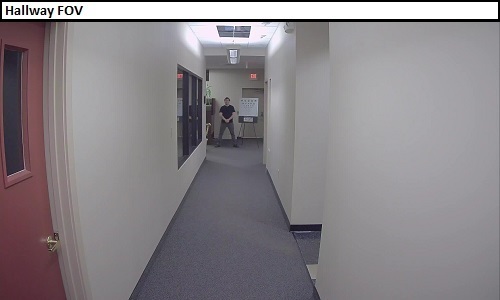 In this scene, the Dahua 4K camera provides few facial details, as do the other cameras. The test chart is most legible in the Bosch 4K camera, down to line 5/6, while Dahua and Axis can read only to 3/4, and the 1080p camera to 2/3. 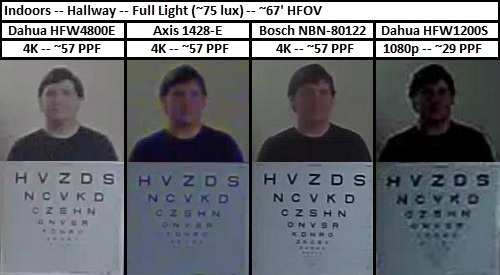 With lights off, no subject or chart details are visible in any camera. Neither integrated IR camera's illuminators properly lit the subject at this range. 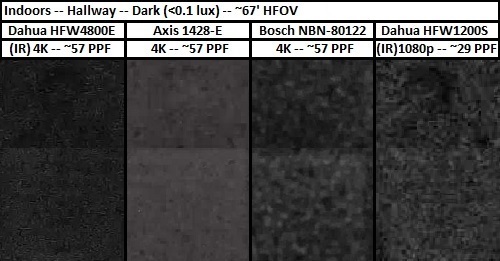 We tested WDR performance against strong sunlight through an open overhead door and the dark area next to it, seen here in this FOV from the HFW4800E. 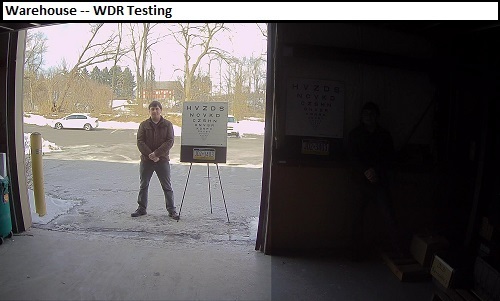 The HFW4800E is not a true multi-exposure WDR camera. Instead, it offers various contrast enhancements via software, which Dahua calls simply "DWDR." We found the difference between WDR off and on at its defaul setting (50 on a 1-100 scale) was substantial, with much better details of the subject and chart in both light and dark areas. Increasing WDR to max (100) produced little improvement. Using BLC instead of WDR, the subject is more recognizable, but the background is near completely washed out. 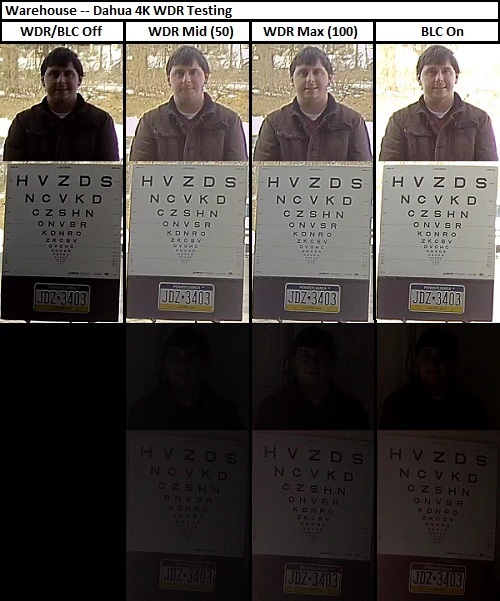 Despite not being a true WDR camera, the HFW4800E (using WDR level 50) performs well in the bright area of the scene, similar to the Bosch 4K model, and better than the Axis 4K and Dahua 1080p cameras. Performance decreases in the dark area beside the door, with the subject only moderately visible. However, the HFW4800E still outperforms the Axis 4K and Dahua 1080p cameras in this scene. 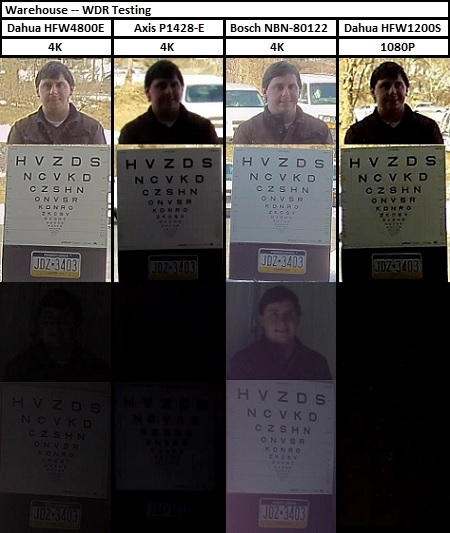 Note that unlike most Dahua cameras, whose compression levels (1-6, 6 being least compression) range from ~22-30 on the quantization scale, the HFW4800E ranges from 30-39. Because of this, we attempted to standardize cameras at this increased compression level for our measurements below.

Overall, the HFW4800E's bitrates remained fairly low, below 4 Mb/s in all scenes. It was the highest of the 4K cameras tested in low light and dark scenes, though the only one of the three providing usable images at these light levels. Bitrates were moderately higher than the 1080p Dahua bullet, as well.