'Everyone' knew Cisco would dominate video surveillance back in 2008.

But, they have not given up.

Recently the company touted a total revamping of their various lines, and video surveillance was a key part of the plan. So has Cisco's new focus made it a contender in the physical security space?

In this note, we explain the following:

Cisco's recent focus in physical security has not been product development, but rather where its current offerings fit within its own immense product portfolio.

Indeed, last month Cisco unveiled it's new six business unit broad 'Intenet of Things' system that pairs it's physical security offerings in video surveillance and access control with 'cyber security' products in the same category. Cisco marketing orients all its current products in the system, with Physical Security being a small part of a sweeping restructure: 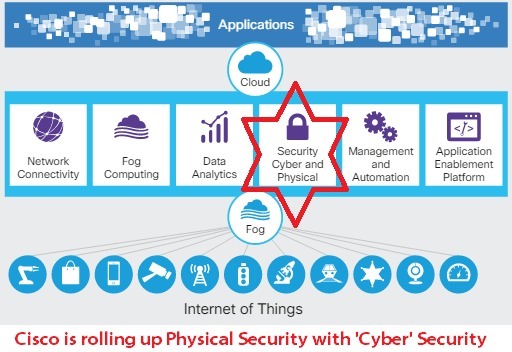 Cisco claims that with the emergent blossoming of IoT, devices like cameras, door controllers, and other network based sensors combined with analytics and the other system components lead to more efficient performance. However, tangible examples of 'IoT integrations' are thin, with existing Cisco video features like edge storage and video-analytic qualified recording being examples of the new 'secret sauce' this new initiative will foster for video.

Other newer IoT 'sensor' integrations are in development, with cameras slated to provide more than just security roles, but also be applied to machine-vision and operational management tasks. 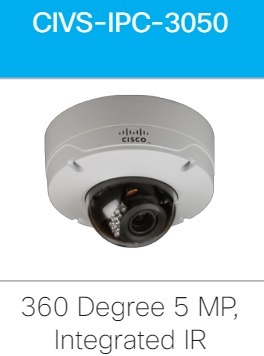 These 'new release' features have been widely available in the market from even 'budget' manufacturers, and are incremental improvements for the OEMs, much less an ultra-conglomerate like Cisco. While Cisco does indicate that more cameras and newer tech is in the future, nothing about these new releases will compel potential customers to take a deeper look or give VARs opportunity to compete for previously unobtainable business.

Additionally, the company is still featuring VSM 7 (v7.2) which it first announced in 2012. The incremental updates since initial v7.0 release are expanded support of camera models and cross-integration with other Cisco platforms, but no major usability updates for video. Again, future versions have been road mapped, but no releases in the near term nor with any firm details.

The new focus on 'cloud' and 'fog' networking has resulted in Cisco making the claims that it's video solution "provides an astonishing 95% bandwidth reduction by optimizing video processing."

The key to this claim is a combination of using edge storage, video analytics, and downscaling resolution during non-event times to reduce the bandwidth needed on a continual basis with the camera. If video streamed back to the viewing client is suspended, the camera itself can record full resolution, full framerate video to local storage and only stream it if needed at full quality. The camera itself can leverage analytics to send back 'important events' to operators and alert them to view full detailed streams as needed.

While the amount of bandwidth needed during the non-event times is likely a sharp reduction, it is not a unique ability and many VMS platforms use dynamic framerates, transcoding, and edge storage in a similar fashion.

As far as controlling openings, Cisco is still plodding away with existing hardware and software. Cisco confirmed that their commitment to the access product line was solid, and existing products are not being obsoleted and are still actively supported, but beyond that, there are no changes.

In terms of real changes at Cisco, physical security has recieved little more than marketing attention with the latest reboot. In several conversations with Cisco executives, the biggest changes and releases to offerings remain 'on the horizon', but there's little actual progress to measure at this point.

In terms of winning over skeptical endusers and making inroads with the integration channel, we do not expect Cisco's security offerings appeal to improve, and may actually worsen given the obtuse positioning of Physical Security as one minor element buried in a larger 'total package' offering.

However, Cisco could potentially win new business at the very top of the market in large unified deployments like cities. A full-solution sell like Cisco's IoT platform could make sense for these customers.

Cisco Acquiring Fluidmesh on Apr 09, 2020
Cisco announced it is acquiring niche wireless manufacturer...
Cisco Video Surveillance Is Dead, Long Live Cisco Meraki Video Surveillance on Feb 11, 2020
A dozen years ago much of the industry thought that Cisco was destined to...
Comments (3) : Members only. Login. or Join.