Explosive allegations are rocking the international wireless and surveillance markets. Chinese authorities allege that fast-growing American manufacturer, Ubiquiti, hired gangsters to terrorize and destroy a Chinese competitor's office. However, Ubiquiti denies these charges, charging that the Chinese company is counterfeiter who attempted to blackmail them. In this note, we break down the details, providing images of gangsters attacking a Chinese company and translation of a Chinese only video.

According to the Chinese press and the company claiming to be attacked, here is what happened:

On multiple occasions, including April 1st and 10th, gangsters broke into a Chinese company's office. The image from the company's surveillance video shows the gangsters assembling: 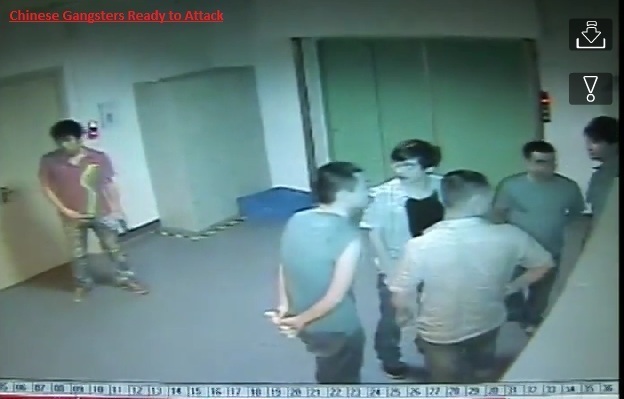 Are these really gangsters? Is that what gangsters in Shenzhen look like? We are skeptical.

In any event, the TV program claims that the gangsters, carrying multiple weapons including swords and stun guns, rushed the office while employees were still inside. The image below shows one of the gangsters brandishing a sword: 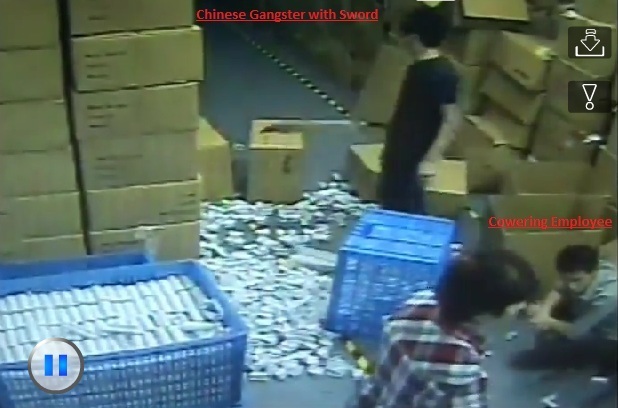 The gangsters trashed the office, destroying as well as stealing some products. The image below shows the resulting trashed office: 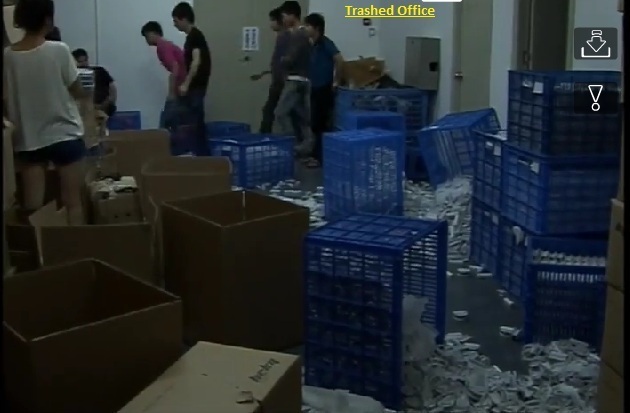 The TV program showed a sample of the company's products, displaying the brand name of 'Zonewave', as shown below: 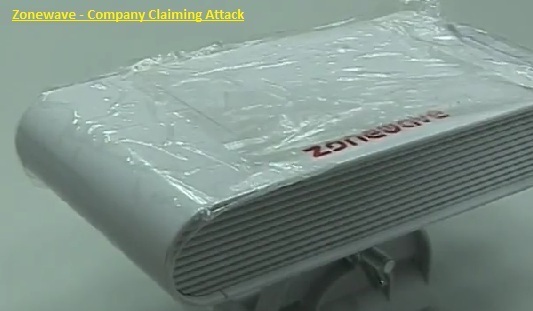 While little relevant information about 'Zonewave' is available on Google, a website named 'Zoneworknetworks.com [link no longer available]' appears to match. Another company, Kozumi, may be related. Overall, the company looks like a fairly small player.

A representative from that company suspects the gangsters were hired by a rival who produces a similar product (i.e., Ubiquiti). The representative said that they had an ongoing dispute with Ubiquiti.

The program displayed a Chinese document with a word that roughly translates to 'trademark'. In addition, the company representative also referred to it as a trademark dispute. However, in English, this does not make much sense unless Ubiquiti's rival was using Ubiquiti's name or product names.

A Bulletin Board Allegations

In addition to the TV program, some are citing a Chinese Bulletin Board post [link no longer available] (Update: the post appears to be down, here is a PDF cached copy we saved). This post argues that Ubiquiti is inexperienced and afraid of strong Chinese competition, claiming, "their 'unique technology' is a software protocol that they built inside their software and it seems that their competition in Asia already are providing products that are similar or even superior at much lower cost."

Our Chinese sources say that Tianya, the bulletin board that posted this, has a reputation for attacking foreigners and being sensationalistic.

Ubiquiti says counterfeiters are blackmailing the company using this 'attack' as a prod to make Ubiquiti back off pursuit of them. Forbes reports: "[The CEO] denies all the allegations and explains that they were spread by counterfeiters in China that the company is pursuing. One of the counterfeiters was previously jailed but was released early, the CEO’s memo said. 'I had recently received emails from the criminals threatening to damage our public reputation if we continue to pursue them. I refused. It appears that in the past several days, they have made good on their threats.”

Last year, Ubiquiti worked with the Shenzhen authorities to arrest counterfeiters and confiscate 1,700 pirated routers. This may be part of this situation.

A memo claiming to be from Ubiquiti's CEO is being forwarded on the Internet:

"We have been battling counterfeiters in China. The criminals are very clever; both former Ubiquiti distributors. One is Chinese living in DongGuan, China where are contract manufacturers (CM's) are based , the other is Taiwanese living in the United States running a WISP distributor in Argentina. They are working as a team. [Editor's note: this appears to match the description of Zonewave/Kozumi]

In 2011, we stopped doing business with both individuals because they broke our distributor agreement rules.

Later that year, we discovered they had setup a factory in DongGuan producing exact 100% identical versions of our products. We believe they had paid someone inside our CM's, stole our PCB design files, schematics, BOM's, artwork, Factory CD; everything. They even hired former production engineers from LIteOn (our largest CM) to setup their manufacturing testing and processes. And, they used their Ubiquiti reseller connections to blend the counterfeit products into the Ubiquiti sales channel. Because the counterfeit products were based on our designs, artwork, and manufacturing processes; customers were not able to tell the products were counterfeit. They thought they were buying genuine Ubiquiti products.

When we discovered what was going on, we hired legal counsel in China to aggressively shut them down. We were successful and the Chinese individual (based in DongGuan, China) went to jail where he stayed awaiting trial.

We tried our best to make the case public to remove the possibility the criminal could pay his way out of trouble, but unfortunately, the criminal was able to pay off the judge in DongGuan and was released early this year.

Following the release, the criminals now feel empowered and are attempting to ramp up their operations."

Now, Ubiquiti has announced a 'Worldwide Campaign to Protect its Intellectual Property Rights [link no longer available]'. While the release does not add any new details, it does officially confirm Ubiquiti's counterclaims of being a victim of a counterfeiter's attack.

Something obviously happened but who did what and for what reasons is hard to tell, especially since the allegations are coming from the wild west of the Shenzhen electronics market.

However, what is clear is that Ubiquiti continues to grow like a rocket ship. Turning in their Q1 2012 results today, the company announced nearly 80% year over year growth [link no longer available] and are on pace for an incredible ~$400 Million 2012. This growth is hurting many of its rivals, certainly in the Western world and we would suspect in Asia as well.

Overall, we are skeptical about the veracity of the Chinese companies claims, especially given the comical surveillance video of the attack.

Last month, we reported how Chinese government officials were attempting to block out foreign surveillance manufacturers. While we see no direct relationship between this and the Ubiquiti allegations, both relate to tensions between China and foreign manufacturers.