Many China fever camera manufacturers have rigged algorithms dynamically adjusting temperatures to more 'normal' results, IPVM has concluded from 6 months of testing 20+ devices. See the 80-second video below overviewing this:

This raises the risk of missing actual fevers and creates a false sense of safety while producing more 'normal results', since nearly everyone has 'normal' temperatures, even if subjects being measured have characteristics (e.g., eyeglasses, hats, hair bangs, walk in groups or at sharp angles to the device, etc.) that fundamentally undermine thermal temperature screening.

Fever camera manufacturers claim to detect fevers in all sorts of amazing conditions: 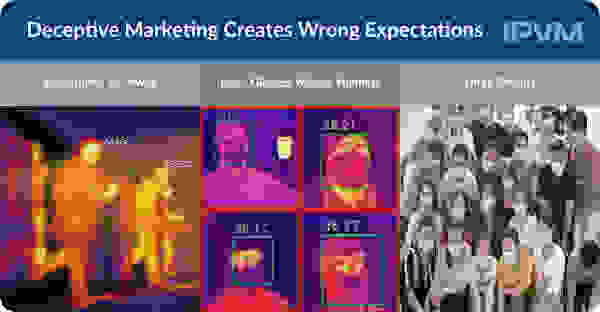 This has created false expectations among the public.

To the contrary, science, global IEC standards, and US FDA guidelines all have determined the proper and correct way to conduct fever screening with thermal systems is to directly measure and report the temperature captured, as-is: 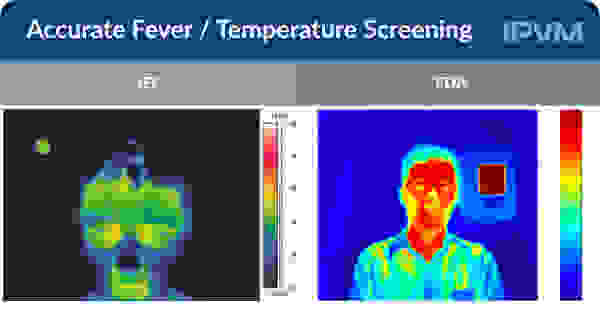 These images (from the IEC and FDA respectively) are, of course, in sharp contrast to the explosion of deceptive manufacturer marketing.

Accurate temperature screening with thermal systems depends on measuring a tiny section of the face that can be obscured by glasses, hats, hair bangs, etc. In the graphic below, shown in red, we contrast the false expectations that people often have (left) with the small area (on the right) where accurate temperatures can potentially be measured. 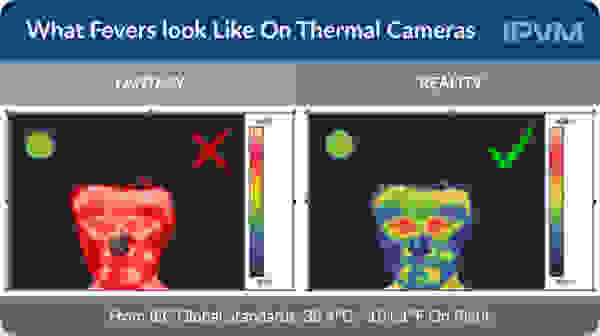 Anywhere outside of that tiny area of the face, the temperature is moderate to significantly cooler so readings that miss that tiny area hide actual fevers and produce too low results.

The fascinating element we found in our testing is that these China systems do not produce extremely low results (like 92°F or 94°F or 95°F) even with conditions that fundamentally block actual thermography from getting a good reading.

So how do these China systems get near 'normal' temperatures of a person even when zooming by on a skateboard?

The chart below shows our findings from one of our tests: 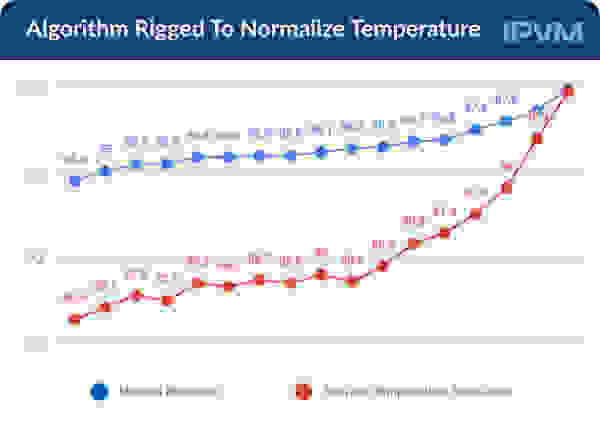 This is clever but dangerous. It is clever since these algorithms correctly assume most people have normal temperatures, so they disproportionately increase low readings into more normal ones. And since almost no one has a fever at any given time, it is typically right even if the process is wrong / rigged.

It is dangerous because when the system has an obvious bad reading (like a guy zooming by on a skateboard) it gives a false sense of accuracy. The guy on the skateboard probably does not have a fever since very few have fevers but a thermal system can not determine that directly, since the angle of incident and the speed of the skateboarder makes that impossible.

The key risk of these algorithms is missed fever temperatures. Because the system corrects readings to more "normal" human temperatures, a subject with a 100°F temperature might be measured as only 98°F. 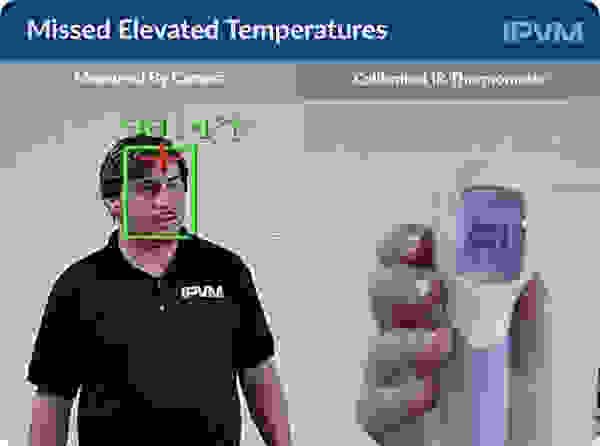 While these systems will be "accurate" when reporting on people with normal body temperatures (~98°F) and may trigger on those with high fevers, missing low grade elevated temperatures is a systematic problem we found in our testing.

Second, fever cameras display nearly “normal” temperatures on practically any face they detect, so even covering the top half of a person's face (with a piece of cardboard), the camera still provides a measurement close to body temperature:

Indeed, a paper printout of a face is measured at normal body temperature, despite only reading 91° on a calibrated thermometer.

This goes against global standards and accepted thermography, as the Chairman of the Board of the American Academy of Thermology declared:

Compensating or self-correcting any temperature would be totally unacceptable. On what basis are they doing that? What do they think they're even measuring temperature if they're just changing the temperature [displayed]?

In our testing of 20+ 'fever' devices, we found most China systems show one or more of these issues, failing to accurately detect moderately elevated temperatures. In particular, see our in-depth tests of:

Love the cardboard and the paper print out reading at a normal temp! Clips like that really help get the point across to people who aren't questioning the validity of these devices.

A simple demonstration to help a layperson spot a scam.

Quite frankly the more I look at these units, both my personal testing & the much broader and more detailed IPVM testing the more I feel that these units should be totally banned.

Any end user who wants their money back should be fully refunded.

Yes I work for a distribution company. Yes we have access to these devices. No we chose not to sell them due to ethical concerns.

I wholeheartedly agree people should be able to get their money back if a system doesn't work or is later shown to not work. And what's with these non-cancellable, eight-week leadtime orders? If the leadtime is that long, there's enough demand the manufacturer ought to be able to sell it somewhere else if in those two months the buyer needs to go elsewhere! My concern is that some of those manufacturers are just taking advantage of their buyers and distributors by pretending they need to do this. 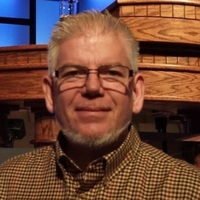 They should all be sued and be forced to cease and desist. They're all frauds.

We did a similar test for a large manufacturer in June who wanted to know which of the five systems they'd bought would work (as well as how well ours, the Fever Inspect, would work), where we tricked one (expensive) "AI-powered" system from a competitor into scanning thin air using a mirror and it returned a reasonable temperature. Later we put a piece of tape over the thermal camera, and again it reported a reasonable temperature, which we duly recorded in the spreadsheet as 97.8F. All the rest (except ours, which reports faithfully what it sees) seemed to be pushing their outputs closer to 98.6F. Its shameful and fraudulent and reflects very poorly on the thermal industry.