Canary now has a sizeable warchest for aggressive expansion.

But is Canary's product any good? We bought one to find out, testing it against Dropcam, as shown in the image below:

Inside, we answer these questions and more.

Overall, Canary is a mixed bag, with some interesting advantages, coupled with potentially crippling disadvantages:

Canary offers some added features such as a built-in siren and environmental monitors which are not found in most competitive options. Additionally, its VMD performance was excellent, with few false or missed activations, resulting in fewer nuisance alerts or wasted recordings.

The ability to add third party monitoring is also a plus, found in few competitors (and notably not in Dropcam), and removes a common objection to many consumer cameras: that they must be self-monitored, leaving users tied to their device or vulnerable to break-in or other events.

However, there are key limitations which may be dealbreakers for many users:

Users seeking alert video only, who have constant access to their mobile device, will find Canary most useful. These users may prefer from the camera's built-in siren, as well, as it may remotely triggered to scare off intruders in case of break-in.

However, the many consumer users, who are not constantly tied to their mobile phones, may find the lack of any advanced search or export functions difficult, and be better served with Dropcam or other options.

Canary sells for $250, direct, or via online retailers. This is ~25%/$50 more than the $200 Dropcam Pro or Samsung SmartCam. However, these models do not include the built in siren or environmental monitoring features of Canary. 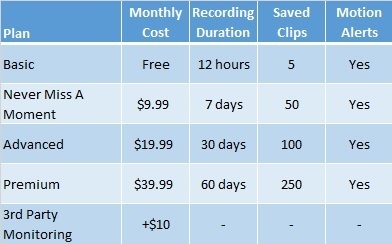 All plans include motion recording and alerts.

Compared to Dropcam, the "Never Miss A Moment" plan is priced similarly ($9.99 vs. $9.95). However, the Advanced 30 day plan is $10 less than Dropcam's equivalent subscription.

Unlike many competitors, which are self monitored by the user only, Canary offers central station monitoring of VMD alerts (discussed below), which may be added to any paid plan for an additional $10 per month. Free Basic plans may not use this service.

Unlike most other surveillance cameras, Canary is intended to sit on a table or shelf. No wall or ceiling mount options are provided. While this is the simplest means of mounting, important for the consumer market, it limits where the camera may be installed, potentially preventing it from obtaining ideal FOV.

Canary setup is simple, with the mobile app walking users through creating an account and adding a camera. Unlike other cameras, which perform initial setup via USB or wi-fi/Ethernet, Canary uses a stereo cable between the camera and mobile device, with them effectively functioning as modems to transmit setup information.

Unfortunately, since there is no way to remove a camera from an account once activated, without waiting for support, we cannot demonstrate the full setup process. The process from starting the app, creating an account, and starting transmission via stereo cable, is seen below:

The main screen of the app displays basic information regarding system status and environmental conditions. Users may tap "Watch Live" to view camera(s), swipe up to open the timeline, and down to open account/camera settings.

From the live screen, users may begin manual recording, trigger the built-in siren, or make emergency calls. Note that emergency numbers should be double checked after setup as they may be incorrect, which we review in configuration, below.

Notably missing from this screen is any sort of snapshot function. Users must use their mobile device's built-in screenshot action (home + top/side button on iOS, for example) to take snapshots. There is also no way to mute/unmute the microphone of the camera, so audio is always on.

Swiping up on the live screen pulls up the timeline, essentially simply a list of events and associated video. While the timeline is simple to use, with few controls, there are two key limitations:

Swiping down, users may access configuration. Most notably here:

This VMD performance is especially important for Canary, as they offer third party monitoring of these alerts, and we found it to be accurate, with very few false positives or missed activations.

Left overnight in an open office area, Canary did not alarm at all until staff turned lights on the next morning, with no triggers caused by digital noise, floating particles, or light changes. Additionally, Canary's only missed activations were in low light when the subject was beyond its IR range. In our conference room test scene (20'x30', larger than a typical residential room), Canary did not miss any valid activations.

Canary's camera is 1080p, higher resolution than many competitors, such as the Dropcam Pro (720p). However, video is highly compressed, with visible image artifacts and pixelization, rendering it only modestly more useful than 720p models.

Additionally, its wider field of view (147° vs. 130° in Dropcam Pro, seen below) further reduces PPF.

In this full light comparison, few, if any, more usable details are delivered by Canary compared to the Dropcam Pro, with the subject's features slightly more pronounced, and lines 4/5 of the test chart slightly more legible (ONVSR/KDNRO). 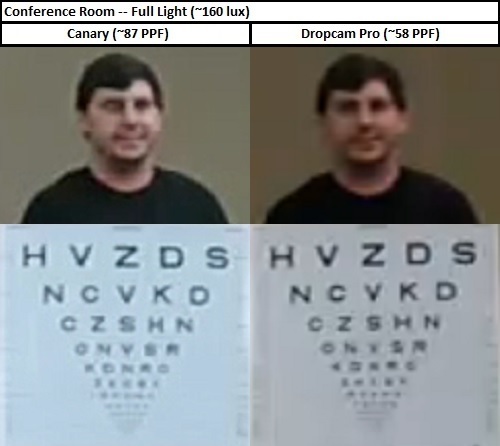 In the dark, with IR on, the difference is neglibible, with neither camera providing usable images of the subject, and only some legible letters on the first line of the chart. 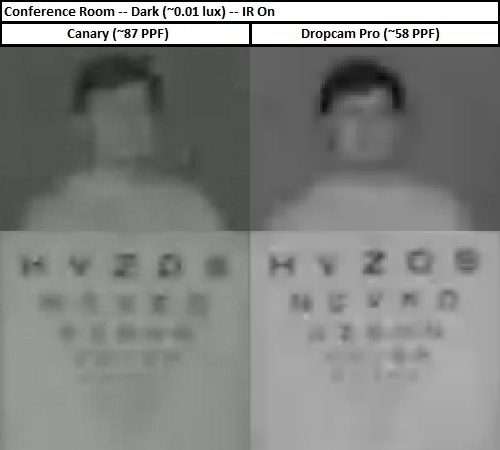 Remote Network Access for Video Surveillance Guide on Jul 27, 2020
Remotely accessing surveillance systems is key in 2022, with more and more...
Vivint Streety Video Strengthens Door Knocking on Jan 17, 2018
Vivint is famous (or infamous depending on your perspective) for mastering...
The Interceptor Aims To Fix Vulnerability In Millions of Alarm Systems on Jan 08, 2018
Security executive Jeffery Zwirn claims a 'catastrophic' flaw exists in...
Honeywell Indiegogo-Funded DIY Intrusion System Examined on Nov 02, 2017
Honeywell did $39 Billion dollars in revenue last year, but they are asking...
Directory Of Consumer Security Cameras on Aug 16, 2017
The consumer camera segment continues to grow, with new startups and models...
ADT Launches Canopy - Professional Monitoring For DIY Devices on Jan 19, 2017
The intrusion industry has criticized DIY security systems for...
You Get Robbed, Canary Will Pay You Up To $1,000 on Sep 22, 2016
Canary is trying to break the status quo in DIY security, first by raising...
An Honest Integrator On The Truth About RMR on Jul 05, 2016
It is fashionable to want recurring monthly revenue (aka RMR). But...
360° Motion Detection Camera Tested (Zmodo Pivot) on May 18, 2016
The Zmodo Pivot trumpets "motion detection in 360 degrees", claiming to...
Fighting Back Against DIY, DMP Opens OnDemand Monitoring and Company Store on May 17, 2016
The popularity of DIY intrusion alarms has become a real threat to the...
Goodbye Dropcam, the $50 Home Security Camera Era Is Here on Feb 10, 2016
Remember those days not too long ago where a $200 home security camera with a...
Mega Chinese Electronics Manufactuer Xiaomi Yi Camera Tested on Feb 05, 2016
Xiaomi's revenue is 4 to 5 times larger than Hikvision's. Only in business...
The Robot Security Ball (Orbii) on Jan 12, 2016
A new security system in a ball might be the most different security product...
Scout DIY Home Security Tested on Dec 11, 2015
This hipster startup claimed it would crush cavemen alarm companies, with a...
Testing Smart Home PTZ (Remocam) on Dec 03, 2015
The consumer cloud video market is dominated by wide angle, fixed cameras...
iControl Piper NV Camera Test on Jun 24, 2015
iControl has raised over $100 million in VC funding to transform the home...
Comments (10) : Subscribers only. Login. or Join.