PoE is not just for cameras, and a new trend may turn the tables by making lights just another networked service.

While electricians often poach security business and hang cameras, this tech could flip things by allowing integrators to install light systems, with the end result looking just like conventional systems. 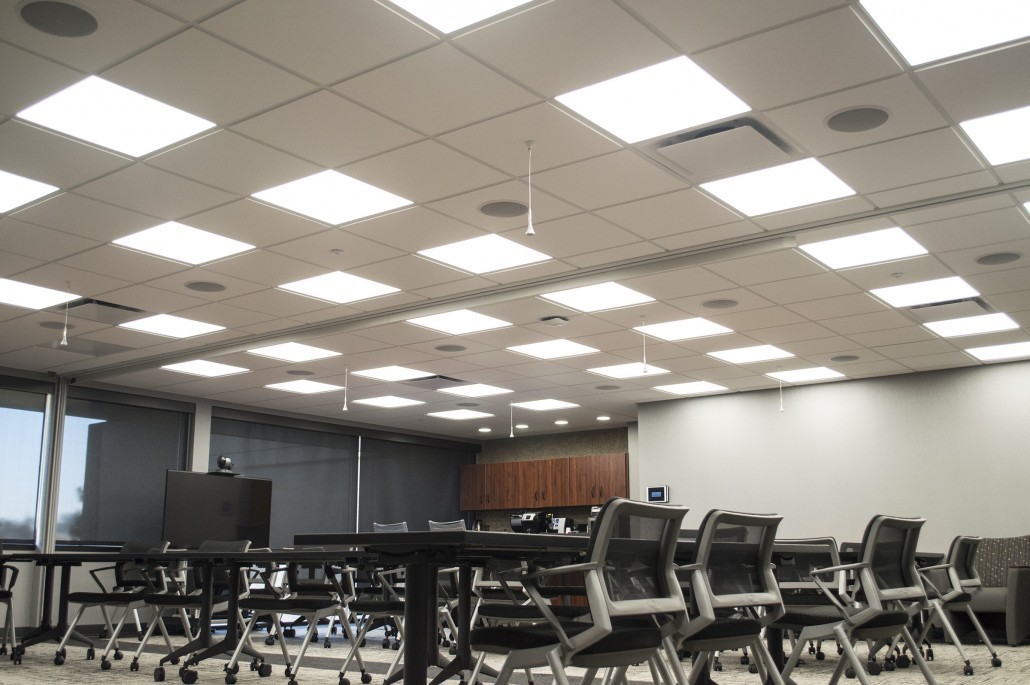 Are these products a novelty, or do they represent real advancement in lighting technology? In this note, we analyze PoE Illumination's potential impact in the integration market.

The general concept of PoE Illumination replaces high voltage electrical lines with PoE powered, network connected LED lighting. LED lighting consumes less wattage than 'traditional' sources, they typically last longer, and a variety of integrated feedback sensors allow lighting to be 'tweaked' according to specific uses. The schematic below demonstrates how such a system would be deployed: 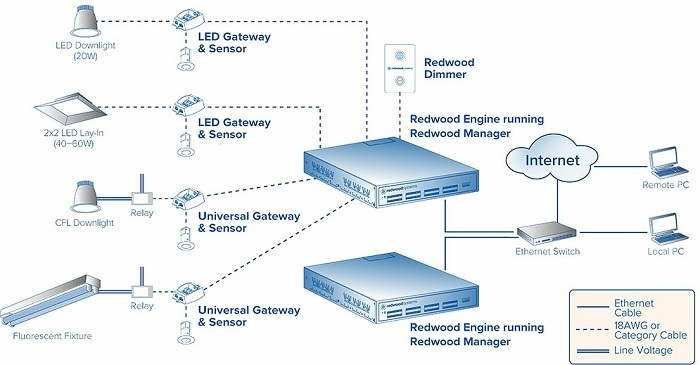 Lighting management servers connect to an array of PoE midspans (or "Gateways") that connect to the actual light fixtures themselves. While LED lights can run directly off of PoE and over Category cables, gateway controlled relays can be used to control traditional fixtures.

The key to this technology is the growing popularity of white LEDs. Because they are more efficient than incandescent or fluorescent counterparts, even the modest wattage output defined by PoE can be used for white lighting.  Take the table below, displaying equivalencies between typical incandescent vs LED lamps at the same output intensities:

A common 60 W bulb is replaced by an LED drawing ~17% as much power. The greater efficiency means different supply sources other than traditional 120 VAC or 220 VAC circuits can be used, even 48 VDC power supplies.

For example, consider that IEEE 802.3af is spec'd to supply between 12W to 15.4W to devices. This means a 60 W LED equivalent bulb using 9.5 watts can be power by a single port, and multiple bulbs may be controlled from a single PoE supply channel, such as 2 or 3 5W outdoor floor lights [link no longer available]. Even modest consumer grade PoE routinely supplies 200 W+ per switch, so given enough ports and proper design, and entire building's lighting could be controlled by one or two PoE supplies. However, the PoE lighting market is already gravitating towards high-intensity applications involving IEEE 802.3at PoE+ that offers up to 60 watts per port.  Entire strings of light fixtures, five or six 60 W equivalents are within spec even now.

Not all PoE lighting systems currently use the 802.3af/at specification, but like early PoE adoption for IT, VoIP, and Security, many project the PoE Lighting market to more rigidly adopt existing standards as popularity, maturity, and utility increase.

Aside from using less power, the PoE aspect allows lighting to be managed and maintained by a different skillset - computer/network technicians.  Aside from simple tasks like changing bulbs, rewiring or configuring traditional lighting systems often falls to subcontract electricians. With PoE lighting, the same IT techs who manage the LAN and video surveillance or VoIP phones can also manage the illumination system.

Precise management of turning lights on/off or when/where in a building they are used can now be a managed service like IP based video or access control.

One of the most compelling aspects of this system is its classification as 'low voltage' technology. This results in lighting systems that do not have to be installed and serviced by licensed electrical contractor, but instead be addressed by low voltage and IT technicians commonly performing security integration work.

Over the last five years, the number of PoE Lighting providers has expanded from a scattered few to more than 15 or 20 from leading networking or lighting brands.

For example, networking gear provider CommScope bought a Silicon Valley startup Redwood Systems, who was an early vendor in this market. However, since then the number has grown sharply and now includes:

While the market is still early, many of these providers now have global sales, distribution, and marketing of their portfolios and are actively pursuing partners.

In many ways, PoE lighting is not new, as several specialty video external illuminator companies offer white/visible LED units as part of their portfolio, including 'security brands' like:

While not intended for general area illumination like lighting systems, these PoE video illuminators demonstrate the viability of the concept for the security integration space.

The market for PoE Lighting may not fully materalize until future, higher capacity standards are adopted, especially IEEE 802.3bt. From our PoE Guide for IP Video Surveillance note:

While still in draft stages and early development, an even more substantial class of PoE (802.3bt) is expected to be ratified in 2017. That draft proposes a variant of PoE able to deliver 100 watts at the source by using all four pairs in a category cable. The most likely markets for 802.3bt appear to be lighting systems, electrical motor controllers, and high powered industrial sensors.

While the additional wattage may not be primarily useful for surveillance cameras, it does open the opportunity for dense commercial lighting circuits and may become and avenue for the IT group or security vendors to expand or maintain lighting systems.

PoE Lighting presents a potentially huge market for low voltage integrators. Various publications estimate the global lighting market to be s significantly larger than video surveillance. This product opens the door for security integrators to encroach into a market where they have traditionally not had the skills or licenses. Integrators stand to take a portion of the lighting market that looks more like IP addressed video surveillance than 'tradition' building lighting.

We think this is a potentially interesting service for integrators to consider as a complement to network based solutions along with video and access control. The upside may enable integrators to take on a market that has been infeasible in the past.

However, a few issues should be kept in mind:

Nonetheless, given the potential for energy savings and the ability to reuse networking technologies, this is a useful alternative to consider.