Immervision was one of the earliest providers of 180 / 360 imaging in the surveillance market. With their CS mount lenses [link no longer available], Immervision offered a different technology (panomorph [link no longer available]) and approach to adding 180 / 360 imaging to conventional box cameras. However, the original lens was limited to 1.3MP while many new entrants offered 3MP and 5MP fisheye lens solutions.

Recently, Immervision started shipping smaller form factor, M mount, lenses that can fit inside minidomes, partnering with manufacturers to have them built into cameras.

Brickcom is one of the first to bring the new Immervision lens to market, with their MD-300Np minidome camera. In this report, we test it head to head against the Axis M3007 and Vivotek FE8172V fisheye panoramics and the Immervision CS mount 1.3MP lens.

We performed a series of test in full light like so:

As well as in low light and dark conditions, like so:

Brickcom MD-300Np panoramic camera showed a very good performance at full and moderate lighting conditions with a low price. However, like other panoramic cameras tested, it had very poor low light / dark scene performance. With its compact and vandal-resistant design, it is a very good alternative in this segment of the market.

Those preferring ImmerVision should strongly consider the Brickcom MD-300Np, as it offers superior performance to the 1.3MP ImmerVision lens at a much lower price (the Brickcom camera and lens is about the same as just the 1.3MP CS ImmerVision lens) plus does not require installation adjustments after mounting to a separate box camera, all of which reduce costs. The only cases in which the CS mount lens may be recommended are strong WDR and low light scenes, where the minidome may be outperformed.

Finally, since the camera only allows for CBR with ONVIF, careful consideration should be given to determine the optimum bitrate setting prior to use. We recommend using the maximum available bit rates for low light/dark scenes. Lower bitrates can be found more adequate at full and moderate light conditions.

Immervision 5MP: Some of you may recall that more than 2 years ago, Immervision pre-announced a 5MP CS mount lens. This lens may have just started shipping. However, the one vendor selling it online is charging nearly $1,200 USD for it. Given its extreme price, even if it was moderately better than the Brickcom / Immervision 3MP, the price delta (~400% more for lens and camera) would be hard to justify.

In this video, we review the physical features of the Brickcom MD-300Np.

This screencast reviews configuration and integration of the MD-300Np. Key points:

In this test, we are extending our panoramic camera shootout results with Brickcom MD-300Np against three reference cameras, at varying light levels and ranges (6',12', and 18'). Below is a brief list of cameras tested.

At close range (6'), Brickcom MD-300Np provides better chart readability and subject clarity than ImmerVision/Sony VB600B, due to lower resolution of the lens, and Vivotek FE8172V, readable to line 4/5. Brickcom MD-300Np slightly lags behind Axis M3007 with respect to clarity and noise but yields higher sharpness. 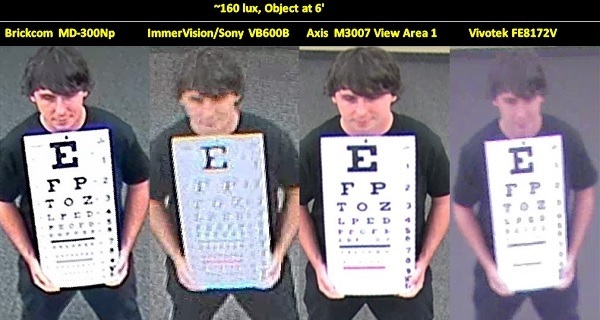 At 12' range, all cameras suffer from reduced image quality but MD-300Np seems to be less affected compared to others, readable to up to 3rd line. In terms of subject clarity, the MD 300Np and M3007 perform similarly, despite differences in object proportions. 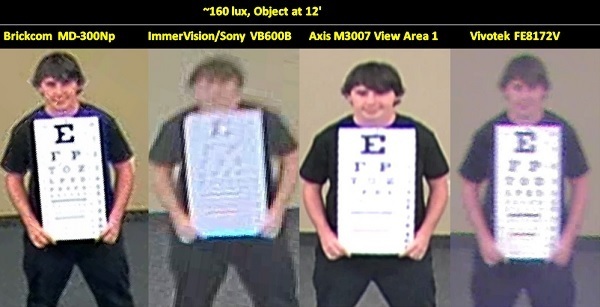 At far range (18'), Brickcom MD-300Np yields a superior image than other cameras despite some edge artifacts and reduced chart readability (only to 2nd line). 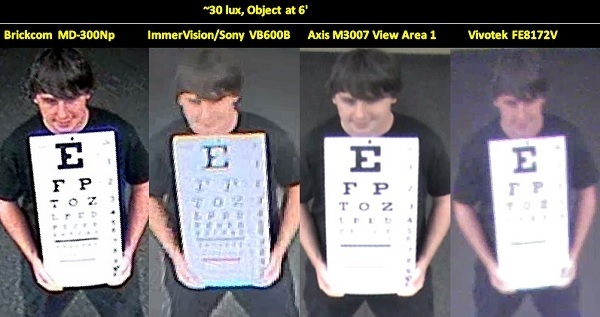 At 12', MD-300Np shows increased artifacting but still produces the clearest image, with chart readability up to 4th line and better facial details. 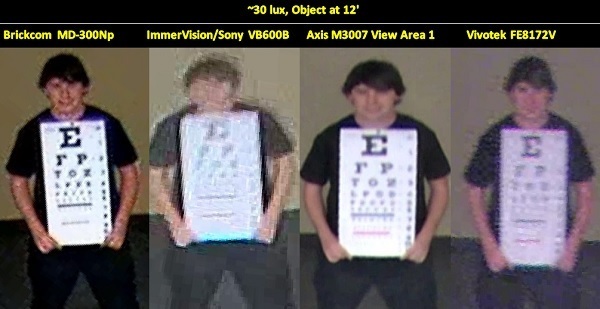 At far range (18'), image details are mostly obscured with the MD-300Np, placing it slightly behind M3007 this time. 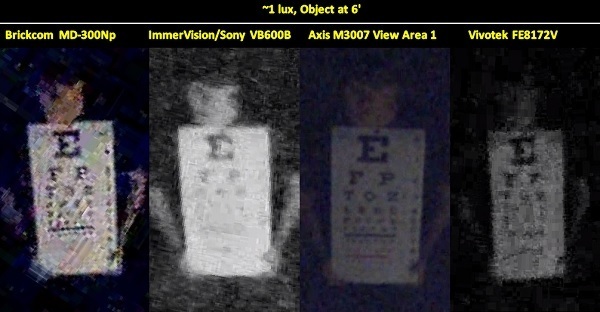 At 12' range, the MD-300Np produced an image that can only be useful for detection, similar to all other three cameras. M3007 produced the most details in this case too. 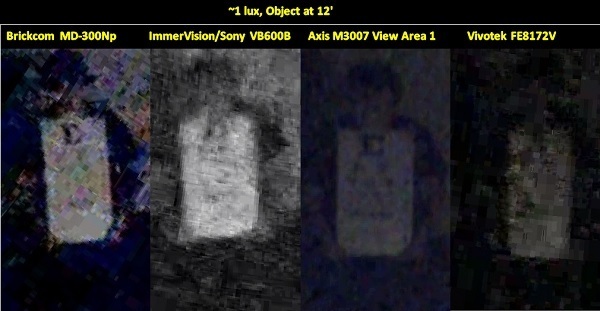 At 18' range, low light performance of the MD-300Np was slightly lagging behind ImmerVision/Sony VB600 and Axis M3007.

At close range (6'), Brickom MD-300Np generates no detail at all, while ImmerVision/Sony VB600B yields the most visibility due to the true day/night function of the camera. First line and the edges of the chart can be distinguished with Axis M3007. 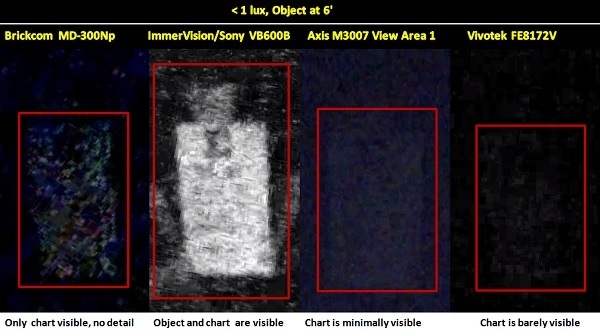 At 12' range, the MD-300Np barely detects the chart. ImmerVison/Sony VB600B yields the most usable image for detection purposes. 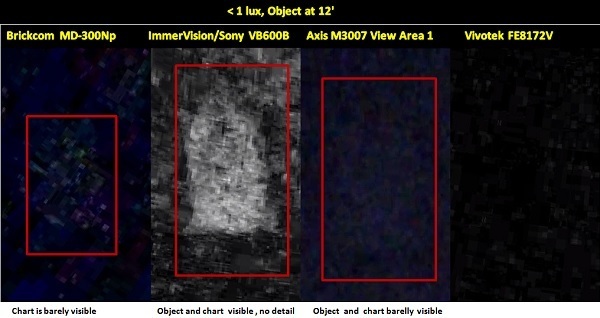 At 18' range, none of the cameras produce any useful image, except for a slightly visible silhouette of the chart and object with ImmerVision/Sony VB600B. 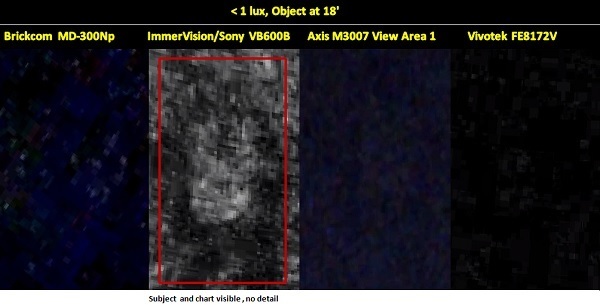 To test the WDR performance, the cameras were set up in a garage with the overhead door rolled up and against a strong backlight. Upper images show results for this scene.

Brickcom MD-300Np do not have true WDR but a digital one. The image with WDR shows significant edge artifacts, washed-out background and chart readability only down to 3rd line. Its overall WDR performance for this scene is almost on par with Vivotek FE8172V but much lower than Axis M3007, which provides the most details.

Lower images show the WDR performance of cameras when the subject is moved to the dark area next to the garage door. All cameras handled the lighting difference better but M3007 and FE8172V produced superior images compared to Brickcom MD-300Np. 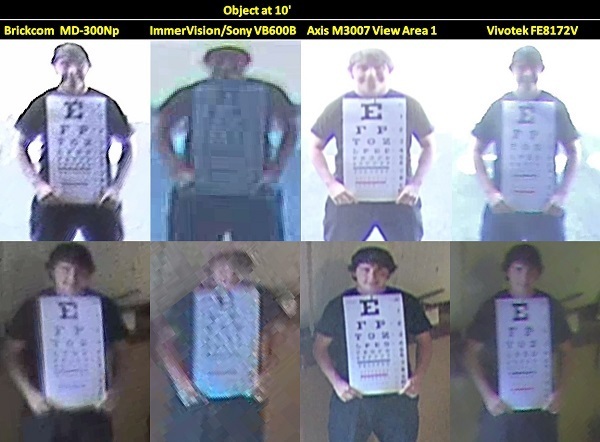 Below images compare the WDR on and off settings of Brickcom MD-300Np for the scene shown above. Clearly, there is some slight improvement with the digital WDR for both lighting conditions but not very significant. 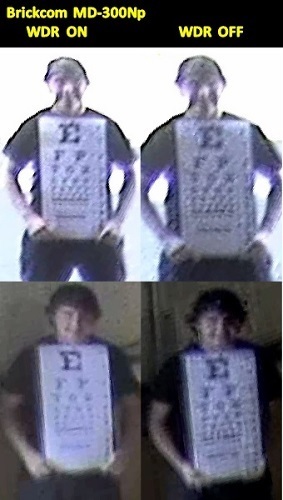 The table below provides a comparison of the average bandwidth values from each camera at different light levels. Since the ONVIF streaming is CBR only for Brickcom MD-300Np, the bandwidth values are constant at around 10 Mb/s. Other cameras used VBR.

At full and medium light conditions, the best performance came from MD-300Np and Axis M3007, which had similar quantization levels (around 25) and bandwidth (~10-12 Mb/s). Since the MD-300Np uses CBR streaming only, compression increases to high levels (45+) in low light. The Axis and Sony cameras increase bandwidth substantially in order to maintain lower compression levels (25-30).

On the other hand, bitrate has a significant effect on the image quality for the low light scene. At 4 Mb/s in this dark scene, quantization increases to 51, resulting in complete loss of detail.

Cameras were tested using default settings, VBR encoding with no cap (except for MD-300-Np which has no VBR with ONVIF encoding). The following firmware versions were used in this test (all most current):

Beware Imager vs Stream Resolution on Sep 10, 2015
Typically, a camera's sensor resolution and stream resolution are the same....
Comments (2) : Subscribers only. Login. or Join.