Minidomes are very popular, likely the most popular of all IP camera form factors, due to their relative low cost and small size. Earlier this year, we tested 3 Axis M30 minidomes. Now, we are testing 3 Bosch minidomes head to head against Axis.

Next, an open office:

There are three key features which set the Bosch Flexidome micros apart from other compact minidomes:

This video reviews the physical construction of the Flexidome micros.

This video reviews the Flexidome micro web interface. Users of other Bosch cameras will not find much different here.

In these comparisons, we tested the Flexidome micro series in an indoor conference room, along with the higher end NBN-733v for reference. In full light with the subject at ~20', details of the subject and chart are good from the 720p and 5MP models are good. The 1080p model provides much lower PPF, however, due to its much wider FOV, impacting image quality. 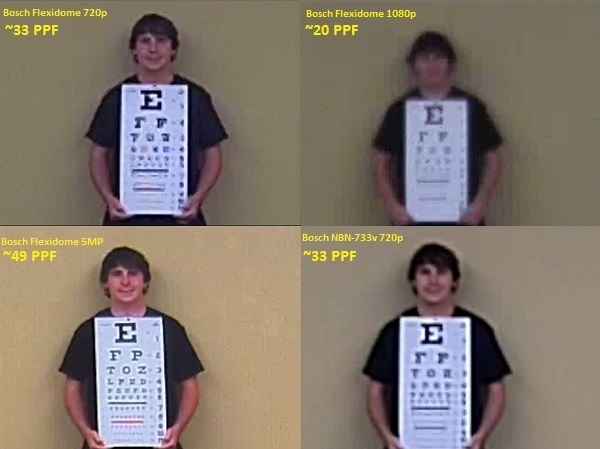 At ~1 lux, the cameras switch to monochrome. Note that this is a software day/night switch, simply removing color information, with no removable IR cut filter. Here, the 720p model and 5MP again display the most details, though the E at the top of the chart minimally readable and the subject unrecognizable. Below this light level, no usable images are produced. 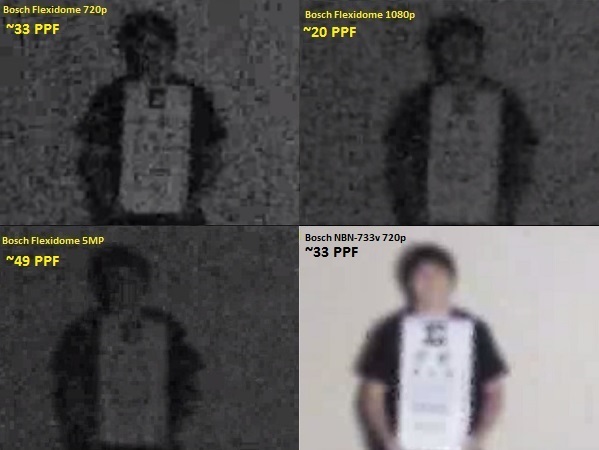 We compared the 720p and 1080p Flexidomes against competitive models from Axis, the M3004-V and M3006, with similar fields of view. 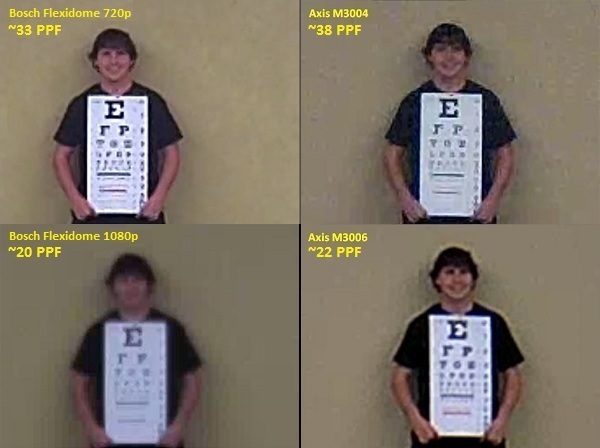 The Bosch 720p dome performs best in this scene, with the E in the chart visible. Other cameras produce detection level video, with no visible details. Below 1 lux, no usable images are produced, with images essentially black. 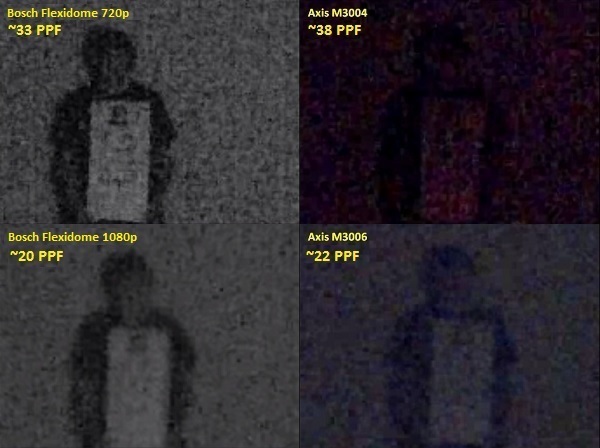 In these indoor office scenes, we display the variance in FOV's across the Bosch and Axis cameras. Below is an empty FOV image overviewing the scene and the differences in FOV's. The FOVs of the 1080p cameras are widest, followed by the 5MP flexidome.

At ~15', our subject is well lit, and all cameras are able to distinguish some details of our subject, such as clothing and build.

At ~45', the 720p and 1080p cameras further lose details, with the subject essentially unrecognizable. The 5MP camera still provides higher PPF, but artifacting and the strong backlight through the entry doors obscure details as well.

Moving the subject to the dark area next to the door, the cameras compare as follows:

Unlike many compact minidomes, the Bosch flexidome micro series is IP66 rated, suitable for outdoor use. We compared them in the following typical outdoor scenes:

This sample shows the differences in FOV of the three Flexidomes: 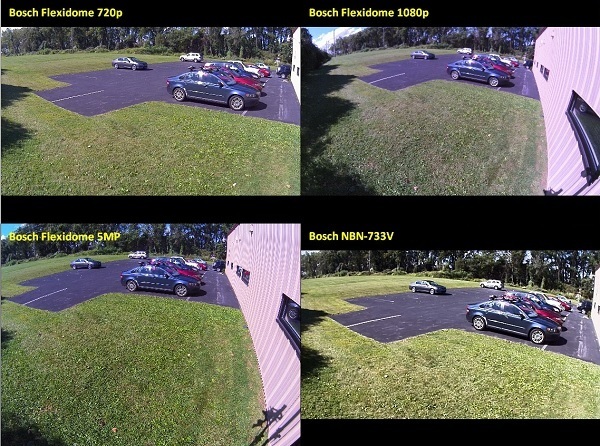 At 15ft', performance is similar to indoors, with the 720p and 5MP models displaying more details than the 1080p model. Both also handled light better, with less overexposure on our chart and subject. 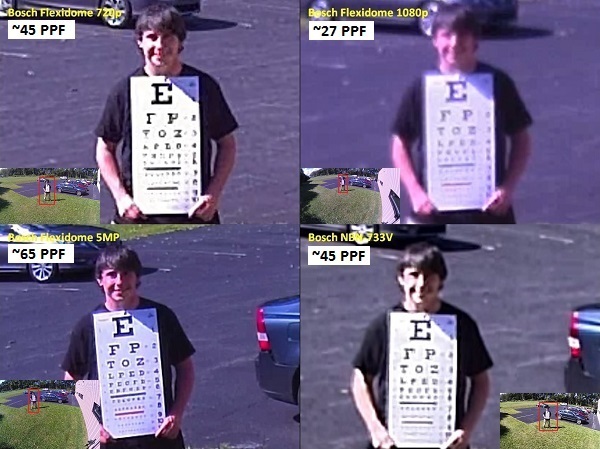 This comparison shows the FOV of each camera at ~2 lux. 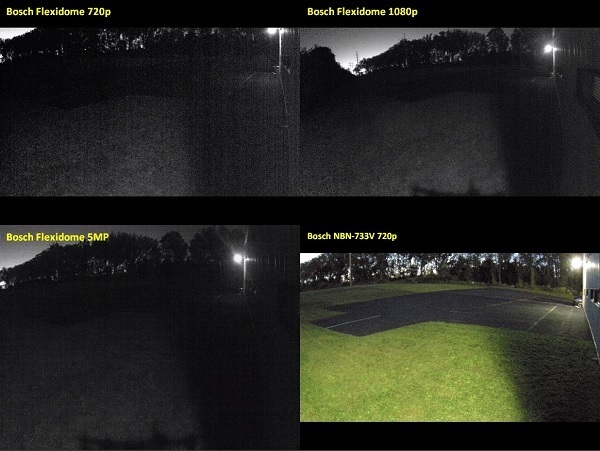 In this scene, the 720p and 1080p cameras show few details of the chart and subject, partly due to overexposure from outdoor lighting. 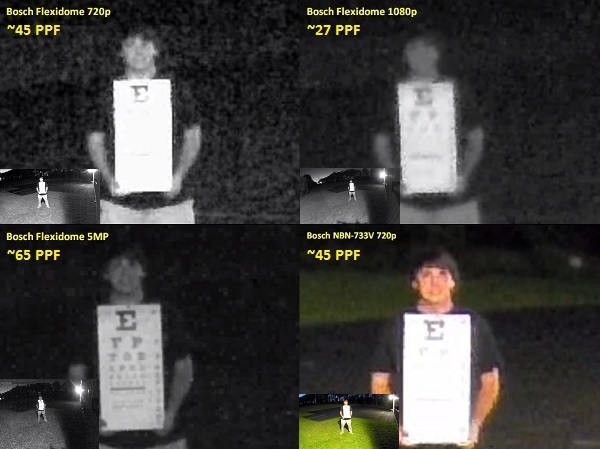 Moving into the darker area of the FOV, both cameras show more details of the chart, but the subject is obscured by noise. 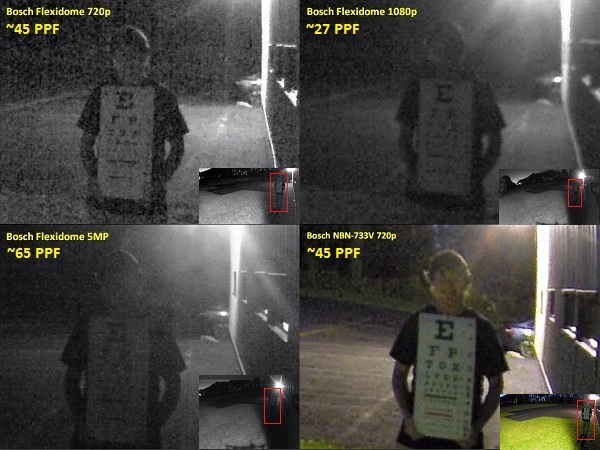 All settings were left at defaults, except shutter speed, which was standardized at 1/30s.

Product / Tech Roundup ISC West 2015 on Apr 20, 2015
IPVM visited dozens of booths at ISC West. Inside is a roundup of many, but...
Testing Varifocal Minidome (IQeye) on Jul 02, 2014
Minidomes are increasing in popularity, as IPVM statistics show. However, the...
Comments (2) : Subscribers only. Login. or Join.