Minidomes are popular. Their combination of low cost and small size make them a common choice for many surveillance applications. One series in particular, the Axis M30, is mentioned on IPVM frequently, both positively and negatively.

The M30 series prices out as follows:

Besides the Axis brand, the domes wide angle coverage and decentralized storage most stood out. The 118° and 135° FOVs of the M3005 and M3006 are much wider angle than the majority of competitive minidomes, potentially making them more suitable for larger areas. Additionally, since all M30 cameras include on-board SD slots, they may be used with Axis Camera Companion to create low cost decentralized systems, instead of requiring a VMS or NVR.

Since the M3004, M3005, and M3006 delivered similar levels of detail in our tests, selection comes down to two factors:

While the M30 series performs well, with some novel features, readers should note that there are many competitive options available. We have not thoroughly tested the M30 series against many of these competitors. However, in our test of Dahua's minidome, the HD2100N, we found that its low light performance was superior to the M3004-V, at a price ~$100+ less. We also plan to test Bosch's recently released Flexidome Micro series [link no longer available], priced similarly to the M30.

In our tests, we found two issues in aiming and focusing which users should be aware of.

Due to the M30's maximum tilt range of 45°, users should be careful when planning ceiling mount installation of the M3004/M3005. This limited tilt results in human subjects being cut off at above the shoulder at relatively close ranges. This screencast reviews these issues:

We found the M3004 and M3005 difficult to aim without throwing off the camera's positioning. Since the lens is so small, and connected closely to the gimbal, it is difficult to turn for focusing without changing the orientation of the camera. This screencast shows the aiming process and these difficulties:

For baseline image quality, we tested the M30 series along with the Q1604 in our indoor scene. In full light, ~160 lux, image quality is good, but with greater levels of noise and artifacting than in the Q1604, especially visible at the edges of the subject against the background in the M3004 and M3005. The M3005 was more saturated than others, with slightly different coloration, which can be seen in this comparison. 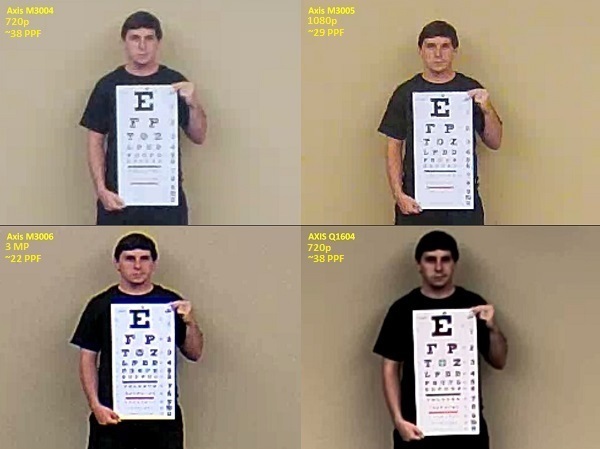 Lowering the lights to about 30 lux, visible noise noticeably increases in the M30 cameras, while the Q1604 remains about the same. Noise begins to affect the details of the subject displayed. 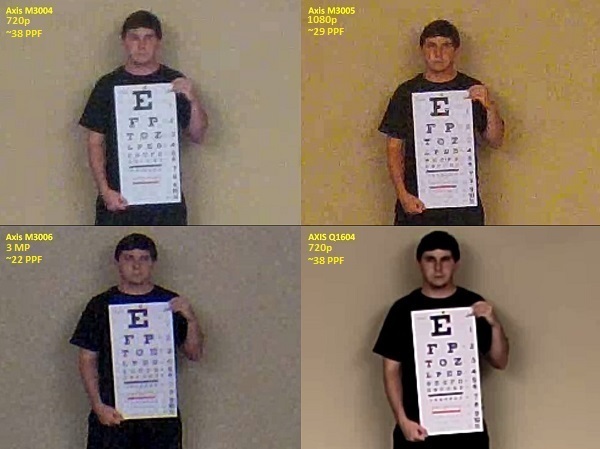 At about 1 lux, noise is substantial, with no details of the subject visible, though he is easily detectable. The M3005 also shows a red tint at this level. Note that this was the lowest light level at which the M3004 and M3005 still produced an image. 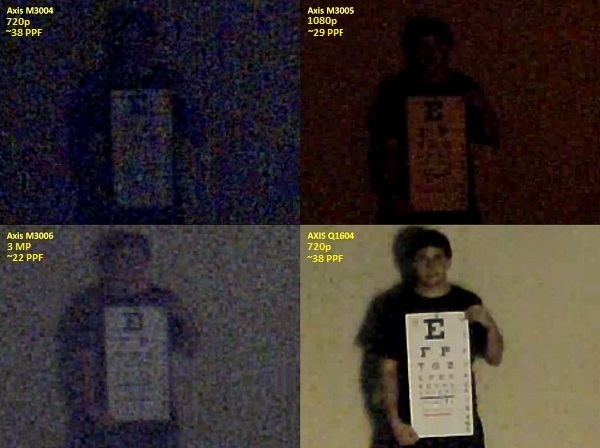 And finally, below 1 lux, the M3004 and M3005 are dark. The M3006 still provides just enough of an image of the subject for detection, seen in the red box in this comparison. 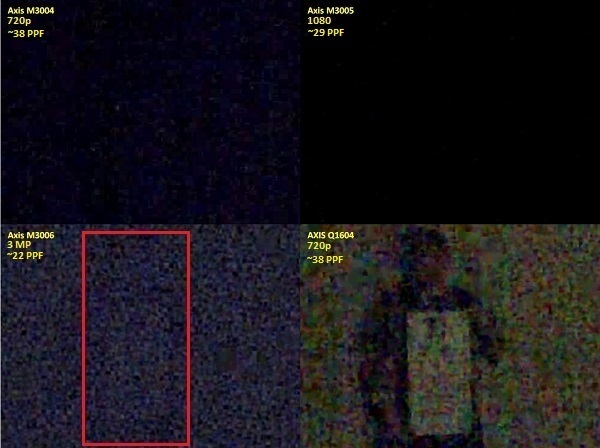 To show practical differences between the FOVs in the M30 cameras, we set them up in an open office area with their standard lenses. This overview image shows the scene, which covers a wide area, including a hallway (~50' long) and cubicle area. Most obvious in this overview is the sheer amount of area covered by the wider angle M3005 and M3006 when compared to the 80° M3004. The M3006 especially captures a substantial area, including beneath the camera, in this case inside an emergency exit door not visible on other cameras. 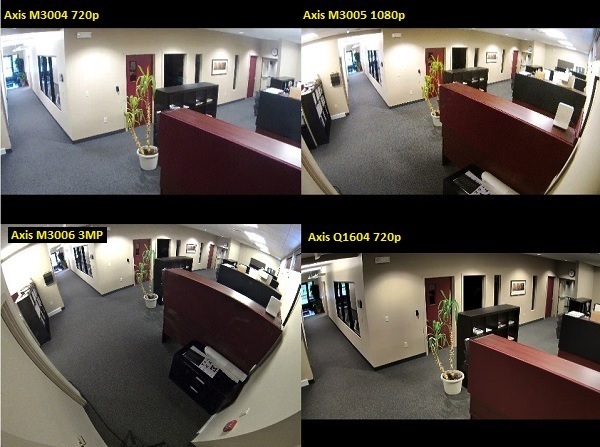 We had our subject walk through the entire area to test general image quality and motion performance. At 15', severe artifacting obscures facial details of the subject in the M3004/M3005. The M3006 is slightly better, though noise and artifacts are still present. Users may download a clip of this scene to view for themselves. 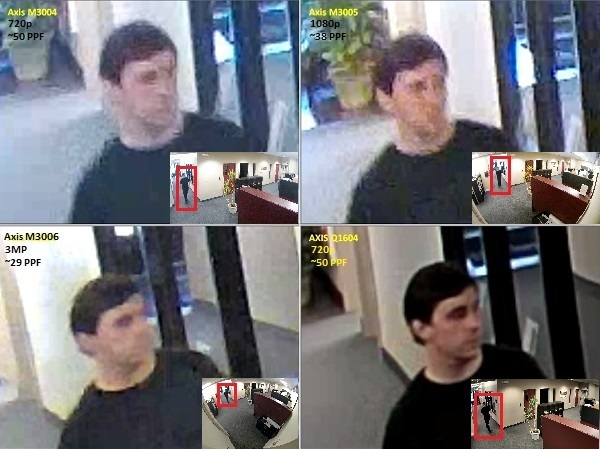 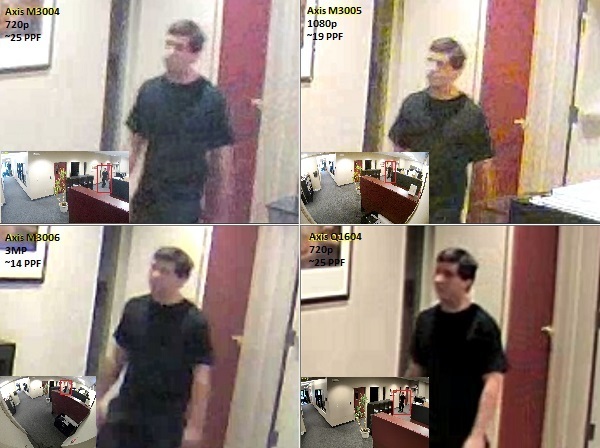 At the far end of the hall (~45'), details are lost due to both low PPF as well as strong backlighting coming through the outside doors. Note that none of the M30 series cameras have true WDR, instead featuring electronic WDR, which Axis calls "dynamic contrast", which we have found essentially ineffective. 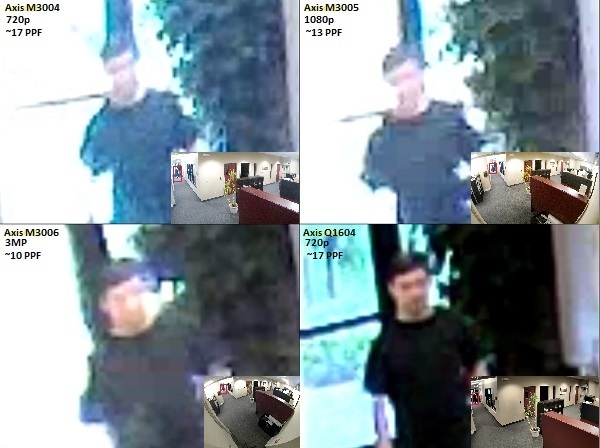 In addition to the 2.8mm lenses the M3004 and M3005 ship with, Axis offers 6mm lenses for tighter fields of view. This image shows an overview of a long open office scene (~90') using both stock 2.8mm lenses and the 6mm accessory lens. 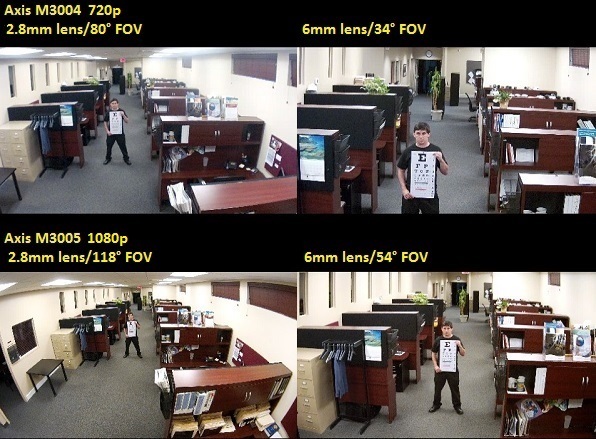 The following image shows the subject at close range, about 20'. 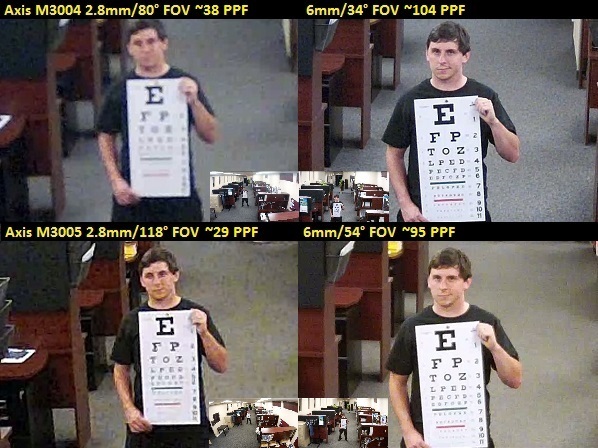 Next, the subject moves to midway through the office, about 40'. Details are almost completely unavailable using the stock lenses, while the chart is still legible to lines 3/4 using the 6mm accessory lenses. 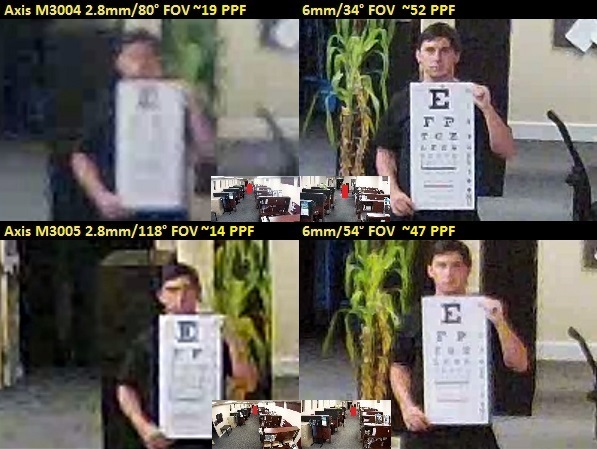 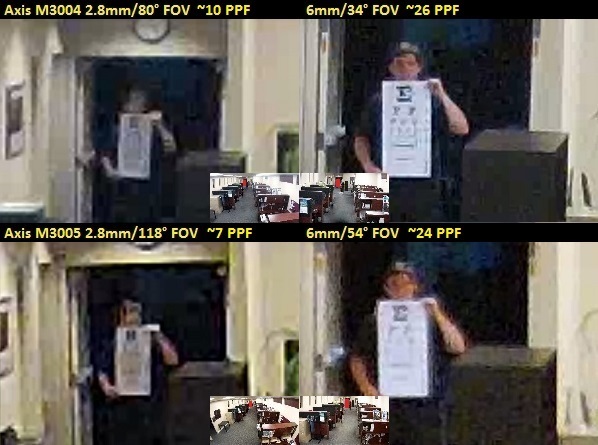 The final model included in the Axis M30 series domes is the M3007 panoramic camera, which we tested in our Panoramic Shootout. We did not include it in all of our M30 tests, but in order to show the difference between the wide angle (135°) M3006 and panoramic M3007, we performed the following comparisons in full light.

At 10' range, the M3006 delivers clearer details of our subject and test chart, with the chart legible down to line 4/5. Due to dewarping, our subject is also stretched wider in the M3007. 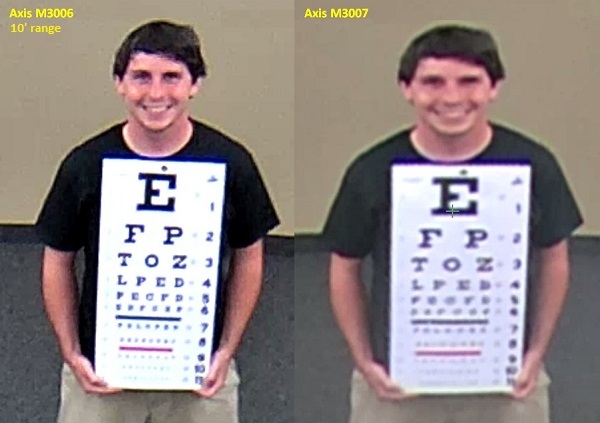 At 20', details become less clear in both cameras, with the M3006 still showing more lines of the chart. The stretching of the subject in the M3007 is more pronounced, as well. 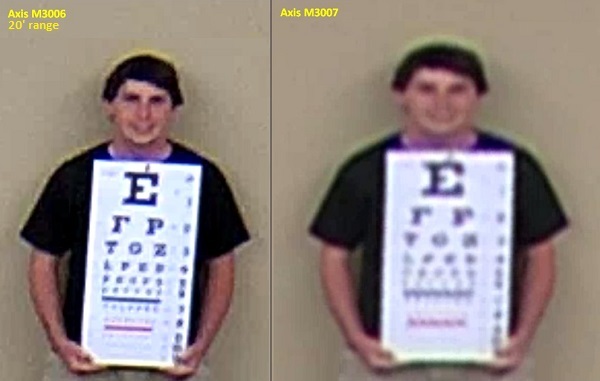 While the M3006 delivers more details at both of these ranges, the M3007's key advantage is providing an overview of the entire room. This image shows the FOV of both cameras, located in the center of the room, at about 9':

Since the three M30 cameras have such vastly different resolution and fields of view, directly comparing bandwidth is unrealistic. However, there are two key points about bandwidth in this test:

This image shows our test scene: 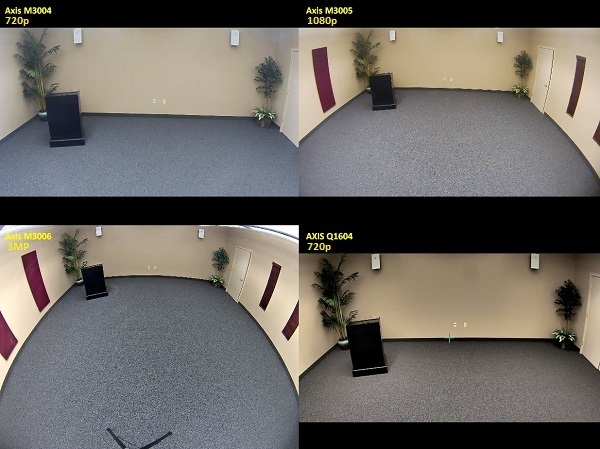 Cameras were tested using default settings, VBR encoding with no cap. The following firmware versions were used in this test (all most current):