Price for each encoder tested is listed below:

Overall, because encoder performance was similar in terms of image quality, PTZ control, and VMS integration, selection essentially comes down to price. Users should be careful to consider not only product price, but VMS licensing, as well, as multiple licenses required may cost as much as or more than the encoder itself.

Both of these options provide greater resolution than even the highest TVL analog cameras, making them more attractive.

In the video below we look at the physical features of the Axis, Hikvision, and Sony encoders. All have similar physical features, including I/O, audio, and serial control, but vary in size substantially.

The Sony SNTEX104 assigns an IP address to each channel, and as a result appears as four separate devices, requiring a VMS license per channel regardless of VMS.

We tested image quality of each encoder using a 600 TVL camera, in the FOV shown below: 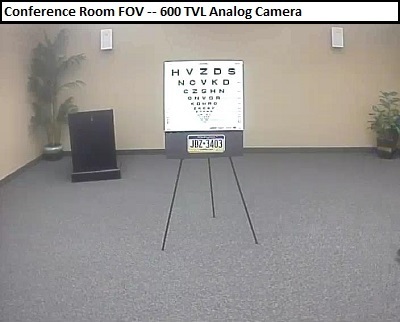 In full light (~160 lux), imae quality is similar across all encoders, with basic subject details visible and lines 1-3 of the chart legible. 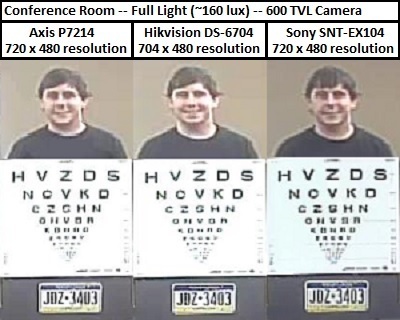 In low light (~0.1 lux) with IR illumination on, details are again similar. 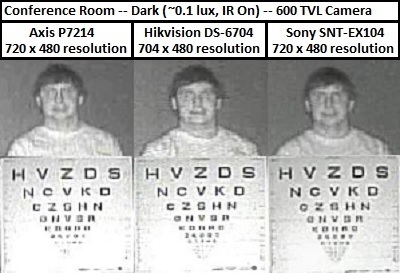 The Sony SNTEX104 offers two improvments to low light imaging: XDNR 3D noise reduction, and visibility enhancer, a contrast enhancement. The difference in low light performance is best seen in the example below, with our subject in the dim edge of the FOV, where IR illumination is not as strong.

However, these features do not provide much improvement in details of either the subject or test chart, seen below. 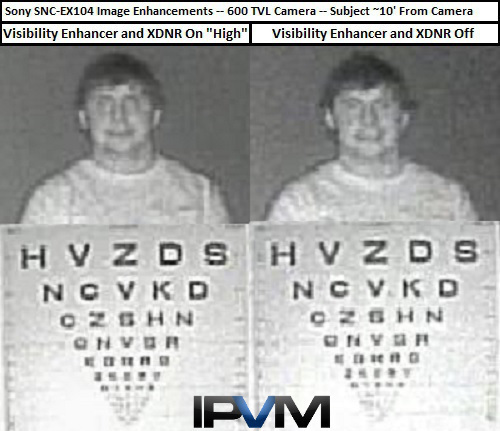 PTZ controls worked without issue in all encoders using Pelco-D protocol. Though setup differed somewhat between models, essentially it required users only to select protocol, baud rate, and camera ID. Since most encoders offered only a single serial port, camera ID is used to discretely address multiple PTZ cameras when connected to one encoder.

All models included multiple PTZ serial protocols (RS-422/RS-485). Axis offers downloadable drivers for specific manufacturers, while Hikvision and Sony protocols are fixed. Of these encoders, only the Sony SNTEX104 offers coaxitron capability (up the coax control not requiring separate serial cabling). The Axis P7214 does not include this option, but their Q series does.

Bandwidth varied widely between encoders. The Axis P7214 was generally lowest overall, an average of 30% lower than the Hikvision DS-6704. The Hikvision DS-6704 was low in most scenes, but spiked to 740 Kb/s in full light when used with the 900 TVL analog camera due to repetitive patterns (carpet/walls/ceiling) not seen with the 600 TVL camera.

Firmware used for each encoder tested: