Things keep getting worse for Axis and now sales are actually shrinking. 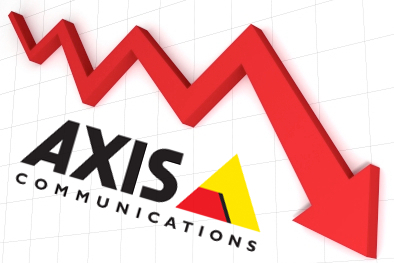 In this note, we break down:

Though Axis is now a subsidiary of Canon, with Canon owning over 80% of Axis, Axis continues to release financials because a hedge fund has blocked Canon from delisting Axis.

Axis sales were actually down 1% year over year, in local currency terms. In the 7 years we have tracked Axis, this has never happened before. However, this was coming. Last quarter (Q1 2015), sales were up just 2%; the quarter before that (Q4 2014), sales were up 7%; and before that, 7% as well. As such, this clearly not an aberration, just a continuation of a long-term declining trend.

Regions and Areas Hurting the Most

Americas declined 5% and Asia declined 9% in local currency terms. Axis needs Americas to grow given that it is their largest region and more than half their revenue. Asia is supposed to be the great growth engine, despite the 9% decline. Axis itself continues to say that Asia has huge potential but they still cannot deliver on it.

We believe Axis challenges are primarily with price-sensitive buyers and smaller size applications, given the specific challenges in South America and Asia and the relative better results in North America and Western Europe. As the results show, this is a real problem, since it continues to pull Axis down.

On the positive side, though not impacting current financials, Axis had an impressive new product release cycle, after a relatively down 2014. Their compression technology Zipstream does / will deliver real savings; Their 33MP multi-imager panoramic is promising; They have rectified problems and improved their decentralized VMS offering; Plus a whole slew of new niche uncommon products like the IP Horn.

All of this will help them on the mid to high end of the market; none of them, given Axis relative high prices will be significant where they struggle in the low end.

For the past few years, Axis financials have gotten worse and worse, but they continuously proclaim:

"The market activity and the inflow of new projects means that Axis’ view on the current market growth rate remains unchanged."

With IP having 'won' at the mid to high end, the growth rate of IP has converged / dropped to the traditional overall video surveillance market growth rate of ~10%. Axis, like all Western manufacturers, cannot win huge Chinese projects due to political reasons, so it blocks them from growth there. And since Axis has chosen not to compete on price or release products cost competitive with the Chinese, they struggle to be even considered in the low end.

However, credit is due to Axis executives for knowing exactly when to cash out.

Just 5 months ago, in February, Canon agreed to pay ~$2.8 billion USD for Axis, a ~$900 million premium over Axis then stock price. Since then, Axis growth has worsened and profits have plunged. With this further deterioration and current financial metrics, Canon paid easily a billion more than a reasonable price for such performance.

Canon says they will continue to let Axis run independently as is.

We hope Canon has a better plan.

Axis Q3 2017 Financial Results on Oct 23, 2017
A big issue for Axis this past quarter was their product shortage. Despite...
Axis Q3 2015 Growth Rebounds on Oct 15, 2015
After an extremely bad Q2, where true sales actually declined, Axis has...
Avigilon Buyout Potential Analyzed on Sep 08, 2015
A number of Avigilon investors and analysts have asked us about the potential...
Tyco Security Layoffs on Jul 13, 2015
One of the biggest security manufacturers, Tyco Security Products, owner of...
Axis, Canon and the Hedge Fund on Apr 28, 2015
Canon 'owns' Axis. However, a hedge fund is causing pains for the companies...
Comments (18) : Subscribers only. Login. or Join.