Every manufacturer has been hit by rapid Chinese expansion over the last few years. Axis is clearly trying to do something about it.

We bought and tested the Companion Dome V against Axis' revamped M30 cameras as well as Hikvision's low cost IR dome to see how it stacks up in image quality, VMS integration, bandwidth, and more.

The Axis Companion Dome V performed similarly to the $100 MSRP more expensive M3045-V in our tests, in low light and WDR scenes, with similar bitrates (including Zipstream) and physical construction. However, it has two key limitations compared to other Axis cameras:

We found a working RTSP stream, but it is neither documented nor supported, plus RTSP, by definition, supports no server side configuration nor camera side VMD.

The Companion Dome V was discovered by multiple VMSes we tested (Avigilon, Exacq, Genetec, Milestone), but none could connect nor stream directly.

However, we discovered an RTSP stream URL which functioned properly with third party VMSes:

This stream is shown here in Exacq:

However, note that this stream removes the ability to configure CODEC settings (FPS, resolution, etc.) from the VMS, and does not support the camera's VMD.

Additionally, Axis says this stream is unsupported and may be removed at any time.

Outward Construction The Same As The M3045-V

The construction of the Companion Dome and new M30 cameras is nearly identical, from the dome cover, to base, to port locations. The only distinguishing markings are found on the back of the dome, where the part number and certification marks are located.

Note: there certainly could be internal changes (e.g., different sensor or encoder / SOC), though the net performance result did not indicate major variances in whatever internal components were used.

What Has Axis Done?

From testing, it seems like Axis took the M3045-V, disabled some software, relabeled it and cut the MSRP by $100. We found it confusing and think many users will as well, especially since they left in the RTSP workaround that well tempt some to save money by getting a 'cheap' / software limited M3045-V.

The Axis Companion Dome is likely to have limited impact on Axis positioning versus low cost leaders Hikvision and Dahua. While this is a new low price for Axis (and a relatively well performing camera), both Dahua and Hikvision offer similarly specified cameras at lower prices, many of which include integrated IR, and essentially all of which include ONVIF support.

On the positive side, those wanting Axis will get the image quality, bandwidth savings and physical construction of a camera that typically costs $100 MSRP more if they elect to buy this version.

For $100/camera, some users may attempt to use the Companion line with third party recorders using RTSP, skirting these issues somewhat, but less technical users likely will not.

Online pricing for the Companion Dome V varies widely, from ~$160-$190, over its MSRP. This too is abnormal, as Axis cameras typically sell for less than their MSRP online. We do not know the cause but Axis has created a separate dealer program for Companion that even existing Axis dealers need to apply for explicitly.

We review the new Axis web interface in this video:

The Companion Dome V produced image details similar to the M3045-V in all scenes except full light. The comparisons below show performance compared to Axis' new M30 models (M3045-V and M3044-V), their previous lowest cost options, as well as a low cost 1080p compact IR dome (in the same price range).

In full light, the Companion Dome V produced moderately less detail of our subject than the M3045-V, with some overexposure of the test chart. 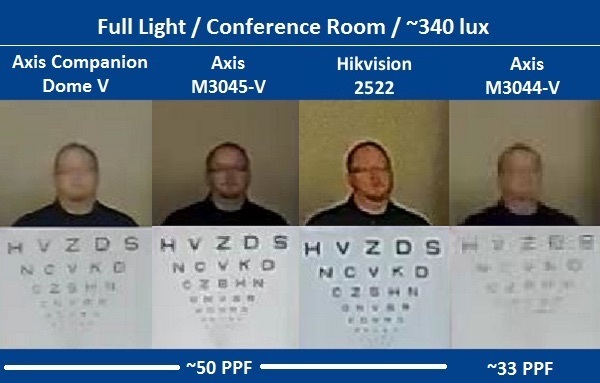 In low light, performance between the Companion dome and M3045-V is very similar, with slight differences in digital noise levels, but similar details. The integrated IR dome provides the best details of all cameras in this scene. 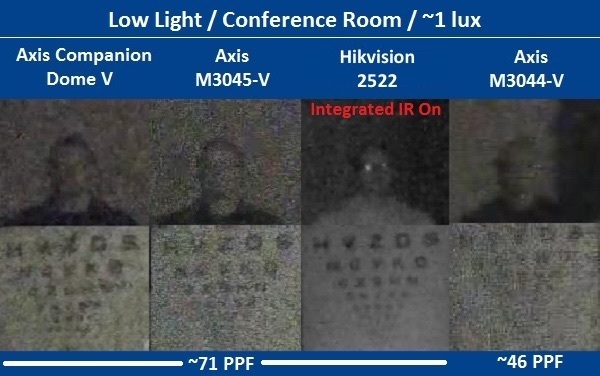 Below is an image of the field of view used in the WDR test. 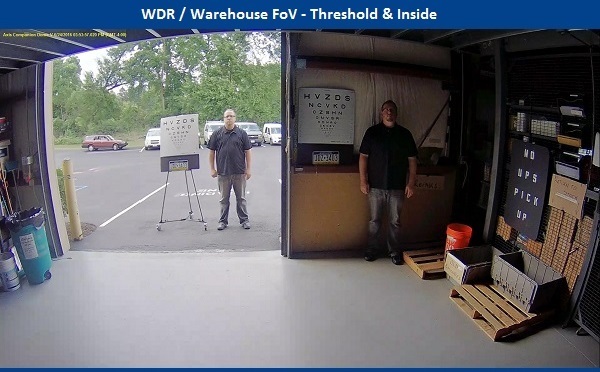 In WDR, the Companion dome again performs similarly to the M3045-V, if not slightly better, with more even exposure in bright and dark areas. 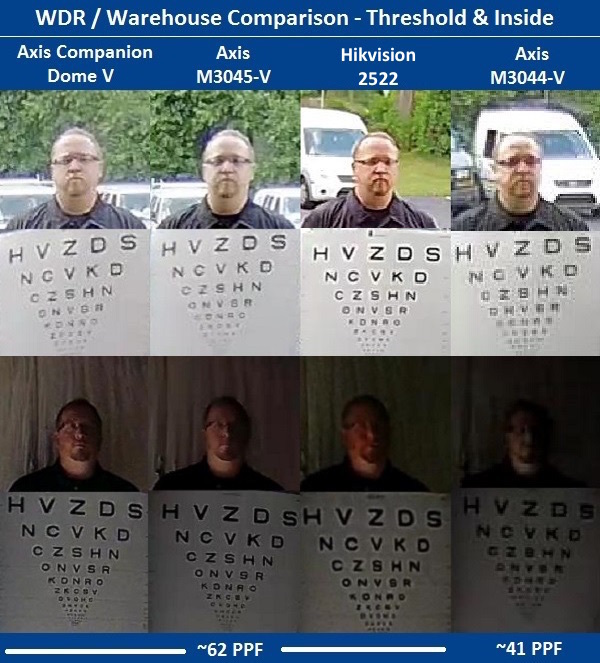 Note that the Companion Dome is marketed as "WDR", but the web interface of the camera shows controls only for "Dynamic Capture", a term Axis has historically used for digital WDR.

The Companion Dome V includes Zipstream, with bitrate performance (not surprisingly) very similar to the M3045-V: 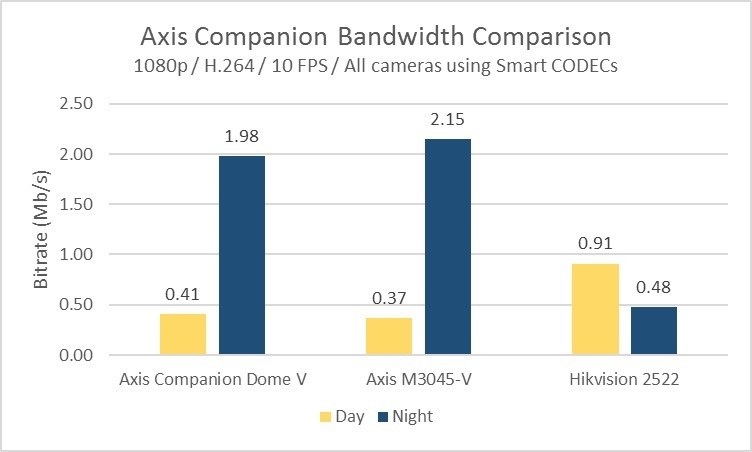 Axis has not made major updates to their Axis Camera Companion VMS with the release of these new cameras, most notably shortening the name simply to "Companion" and adding support for this new camera line.

The video below shows a brief overview of the main interface of Companion, used for live monitoring:

Free cloud access is still included as well, with new Companion cameras as well as Axis models, one of the key features in their 3.0 release:

Axis ~$100 Camera Tested on Jul 17, 2018
Axis has released their lowest cost camera ever, the Companion Eye Mini L,...
Axis Launches ~$100 HD Camera on Apr 11, 2018
Chinese manufacturers, led by Hikvision, have come to dominate the low end of...
Broken Browser Support for Video Surveillance on Mar 22, 2017
Modern web browsers have left the security industry behind. Current Chrome,...
Axis Video Revenue Down (Q3 2016) on Oct 20, 2016
An important milestone. Axis revenue for video products is down year over...
Axis, DVRs Are Not Being Phased Out And You Know It on Aug 16, 2016
Today, an Axis Director declared: "In most cases, DVRs are used with...
Panasonic Embraces Advidia OEMing of ACTi, Dahua and Hikvision on Jul 26, 2016
Clever move or surrender? When Panasonic bought Video Insight in 2015, the...
Axis New IP Camera Web Interface on Jun 29, 2016
Axis is rolling out a new and substantially improved IP camera web...
Comments (24) : Subscribers only. Login. or Join.