Avigilon has released 9MP and 12MP HD Multisensor cameras, adding reposition-able sensors with remote focus and zoom, features not before seen in the expanding multi-imager market.

However, with Arecont no longer the only game in town, and Axis (33MP) and Pelco (Optera) releasing their own multi imager models, the question is whether these novel features are enough to set the HD Multisensor apart.

We tested the camera against Arecont's SurroundVideo Omni 12MP, Axis Q3709-PVE 33MP, and Pelco Optera 12MP to see how it stacks up, in day and night scenes, WDR, installation, and more.

Here are the 4 entrants mounted side by side:

These are the key advantages and disadvantages of the Avigilon HD Multisensor versus competitive multi imager models:

Avigilon's Multisensor offers flexibility in repositioning imagers similar to the Arecont Omni, allowing it to cover fields of view aside from typical 180 and 360 views (which are still available), such as 270° when corner mounted, or interior T or X hallways.

Additionally, due to the integrated motorized varifocal lenses, users may adjust these views from the camera's web interface instead of changing and refocusing M12 lenses as in the Arecont Omni, which can be touchy and difficult to properly focus.

Because each imager uses an independent 3-axis gimbal, Avigilon does not suffer from the tilted images/wasted FOV of the Axis Q3709 when set in a 180° view, since individual imagers may be rotated to remove this issue. This is not possible with the Q3709-PVE.

Finally, Avigilon sends a separate stream for each imager, unlike the Pelco Optera, which stitches imagers in the camera, producing warped "bowtie" shaped images without a special plugin, but also uses only one IP address, unlike the Axis Q3709-PVE, which requires three (one per imager).

There are limitations in how imagers may be repositioned, due to the size of their motorized zoom mechanism, making it less flexible than the smaller imagers used by the Arecont Omni, which may be fitted closer together.

Because of these limitations, only three imagers may be used when configured for a 180°, making total resolution 9 MP instead of 12 MP found in Arecont and Pelco. Note that Avigilon's 360° models are 12MP.

Finally, 3MP is the maximum pixel count per sensor in the HD Multisensor, with no higher resolutions available, such as the 20 or 40MP models from Arecont or Axis' 33MP Q3709.

Much better WDR performance than Arecont and Axis, though moderately weak compared to Pelco Optera, especially in darker areas of the scene.

Total bitrates lower than other 180° multi imager cameras in all scenes.

Imagers are quickly repositioned using a thumbscrew to adjust tilt and lever to adjust pan, without the unscrewing/screwing required by the Arecont Omni. Angle of view is simply adjusted via the web interface.

There is no simple/automated way to set up the 3 imager Multisensor in a 180° angle of view, the most common use case for multi-imager models.

Users may achieve a roughly ~195° angle by moving the outer imagers as close to center as possible, though PPF is reduced compared to others due to the wider AoV, as well as the use of three imagers instead of four.

270° view capability is useful in capturing wide areas from building corners, not available when using other multi imager models (with the exception of Pelco Optera).

Estimated street price of the HD Sensor ranges from about $1,500 USD (three imager indoor) to about $2,000 (four imager outdoor).

The camera heads of the Avigilon multi sensor are larger than other multi imager options, such as the Arecont SurroundVideo Omni, due to the inclusion of motorized zoom lenses instead of fixed lenses found in others.

Sensors may be adjusted from horizontal to nearly vertical. Horizontal angle of movement is more limited, as sensors are locked to a "track" which only allows ~90 degrees movement. The larger size of the sensors also prevents them from being angled too tightly as they physically bump into each other.

This video review the physical construction of the camera:

The web interface of the Avigilon multisensor is similar to other Avigilon cameras, though with added tabs in most menus for individual configuration of each sensor. Exposure/white balance/etc. may also be set globally.

We review configuration in this video:

The heads of the Avigilon multi imager may be repositioned, similar to the Arecont SurroundVideo Omni, to cover views outside of typical 360 and 180 angles.

For example, the 3 imager multi sensor ships in a 270° configuration. This allows a single camera on the corner of a building to cover multiple angles which typically require separate cameras. This is not possible with most multi-imager cameras (aside from Pelco's 270 Optera models).

The image below demonstrates this view:

However, unlike other cameras which ship in a fixed 180° configuration, there is no simple way to configure the camera in a 180° degree FOV.

The sensors of a 3-head camera may be configured close to an 180° field of view by centering the middle sensor, and moving the outer sensors as close to it as possible. Zooming roughly halfway in on each sensor, with some height and level adjustments, actual angle of view is about 190-200 degrees.

We show this process in this video:

In this test, our competitive image quality testing focuses on using a 180° field of view, as this is the most common/most requested application for multi imager cameras.

Because of Avigilon's sensor size and positioning configuration compared to other models, only three imagers are used in this setup, reducing total resolution to 9 MP compared to 12 MP in Arecont and Pelco, reducing PPF across the FOV.

Note that when using 360° views, this limitation is not present, as the four imager/12MP model may be used, with the same sensor AoV as others. Additionally, users may choose to narrow the FOV to increase PPF or zoom in on "hotspot" areas in the scene if a full 180° is not needed.

As noted above, the image quality comparisons below were performed using a 3 imager Avigilon multisensor using a ~180° field of view. Note that there are some differences in FOV due to how the camera must be physically mounted, seams between imagers, etc., but all are viewing roughly 180°. 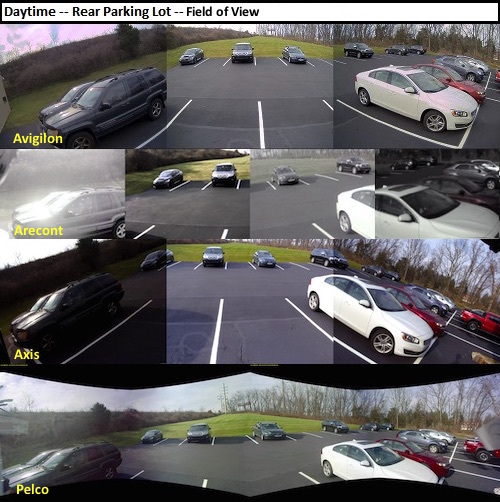 In daylight, the Avigilon multisensor provides slightly reduced details compared to the Pelco Optera, due to its wider individual sensor AoV, though moderately better than the Arecont 12MP Omni. The Axis Q3709 provides clearer details of the subject and chart due to its higher PPF. 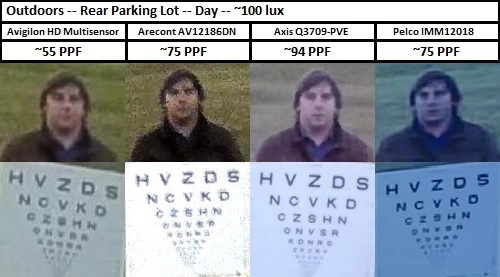 Moving further from the cameras, PPF drops, with the Pelco camera delivering better details of the subject than Avigilon. 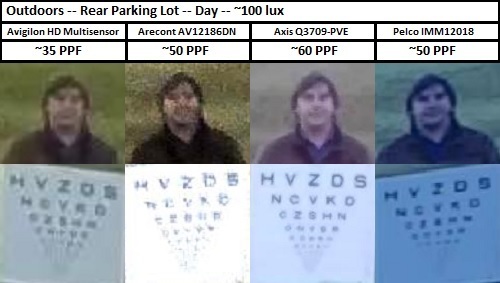 In low light, the Avigilon multisensor performs similarly to the Axis Q3709-PVE, with similar details of the subject and chart. The Pelco Optera produces slightly more detail in the test chart than Avigilon and Axis. 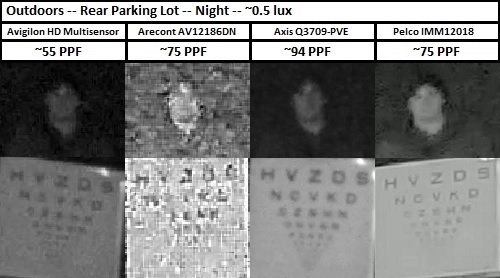 In a wider FOV, none of the cameras produce usable details of the subject, nor the test chart. 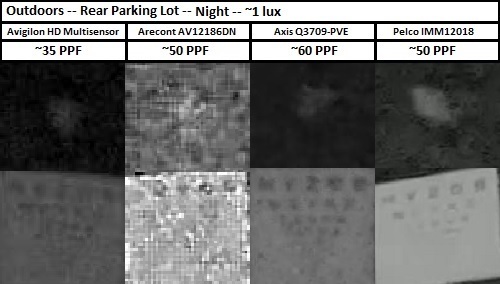 We tested the cameras in a warehouse scene with open overhead door to test WDR performance, seen here: 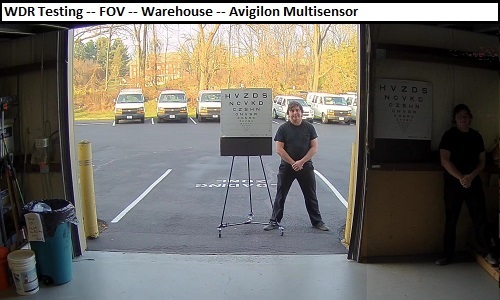 The Avigilon multisensor performs well against strong backlight in this scene, but is weaker next to the open overhead door compared to the Pelco Optera, which clearly showed our subject in both areas. 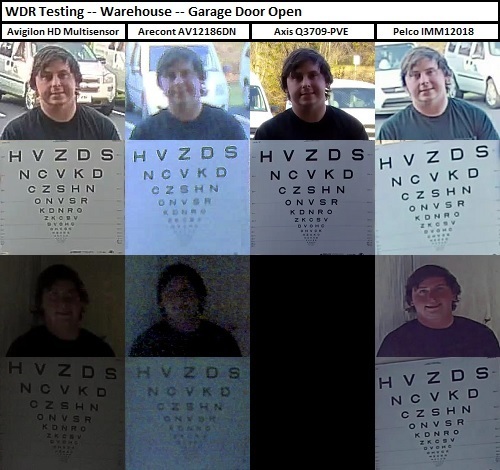 The Avigilon Multisensor had the lowest bitrates of all the cameras in this test by a solid margin, both day and night. 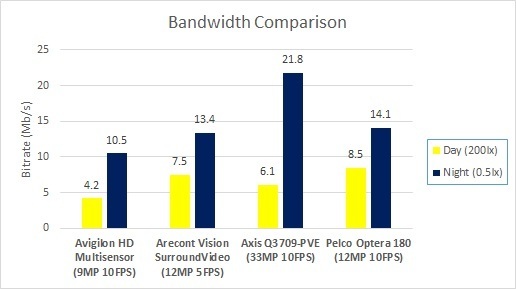 Not surprisingly, the Avigilon multisensor was best integrated with Avigilon Control Center, with only one VMS license used and full access to camera configuration through the VMS.

The camera used only one license in Milestone XProtect, as well, when added via ONVIF, due to Milestone's one license per IP policy. Camera side VMD was also supported in XProtect.

The camera added successfully to Exacq and Genetec via ONVIF, as well, though both required three licenses and did not support camera VMD.

Avigilon Opens Up Analytics And Cameras on Nov 06, 2018
Avigilon is opening up. The company historically famous for advocating its...
Avigilon "Self-Learning" Analytics And VMD Tested on Jul 23, 2018
Avigilon is a popular choice for video analytics, offering "self-learning"...
Avigilon H4 Multi-Sensor Adds 32MP, H.265, Analytics on Jun 13, 2018
Avigilon has announced the H4 Multisensor, the successor to their...
Axis Granted Review of Arecont Multi-Imager: 'More Likely Than Not' 'Unpatentable' on Jan 09, 2018
In 2016, Arecont publicly threatened Axis [link no longer available] with...
Multi-Imager Camera Guide on Jan 02, 2018
Multi-imager cameras are an attractive option for covering wide areas...
Repositionable Multi-Imager Camera Guide on Dec 22, 2017
Multi-imager usage has been growing strongly over the past few years. Now,...
Avigilon Access Control 2017 Examined on Nov 01, 2017
For more than 4 years, Avigilon has been in the access control business,...
Hanwha 20MP Multi-Imager Tested (PNM-9081VQ) on Oct 09, 2017
Hanwhwa has introduced the latest in their multi-imager camera line, the...
Pelco Optera 270° Camera Tested on Sep 06, 2016
Multi-imager cameras are typically 180° or 360°. Pelco has released a fixed...
Pelco Optera 180° Camera Tested on Aug 02, 2016
In our initial testing of Pelco's Optera multi-imager, the main issue was...
Avigilon Sales Warning: Panoramics 'Useless for Investigation', 'Evidence Dismissed' on Jun 28, 2016
Are panoramics useless for investigation? Will evidence from those cameras be...
Arecont Attacks Competitors, Drops Prices on Jun 09, 2016
Arecont is fighting back against the surge of multi-imager cameras from Axis,...
Ambarella Pushing These IP Camera Trends on Apr 13, 2016
Will the market soon be ruled by H.265 and 4K Multi-sensor...
Avigilon H4 HD Cameras Released on Feb 01, 2016
Avigilon has announced a new generation of cameras, the H4. In this note,...
Top 5 Video Surveillance Product Advances Going Into 2016 on Dec 31, 2015
Here are the 5 product areas that have had the most meaningful product...
Comments (12) : Subscribers only. Login. or Join.