Avigilon is changing their strategy, shifting away from their classical HD positioning to their new found video analytic focus.

In this note, we break down 8 specific shifts that are key to understand how Avigilon is refedining itself and how that will impact the company and the market.

HD has fallen in importance.

For instance, compare their stance just one month apart:

Not only has HD been removed but so has the reference to being 'open'. Though Avigilon will continue to sell HD and may continue to be as relatively open as they have been in the past, this points to them de-emphasizing both elements in their strategy going forward.

Given that HD has become so commonplace, if not commoditized, basing one's position on HD is increasingly difficult and undifferentiated.

Avigilon's CEO admitted as much in an interview:

"What we think is happening now is that a commoditization of hardware, particularly IP and megapixel camera, is underway. There is an increasing influx of typically Asian-made, low-cost cameras hitting the market."

Indeed, even their much touted HDSM has been pulled from their investors' deck:

HDSM has always been more hype than substance, whether in the form of JPEG2000, multi-streaming, etc.

Avigilon is now looking broader than the video surveillance market. In December, they looked just at surveillance: 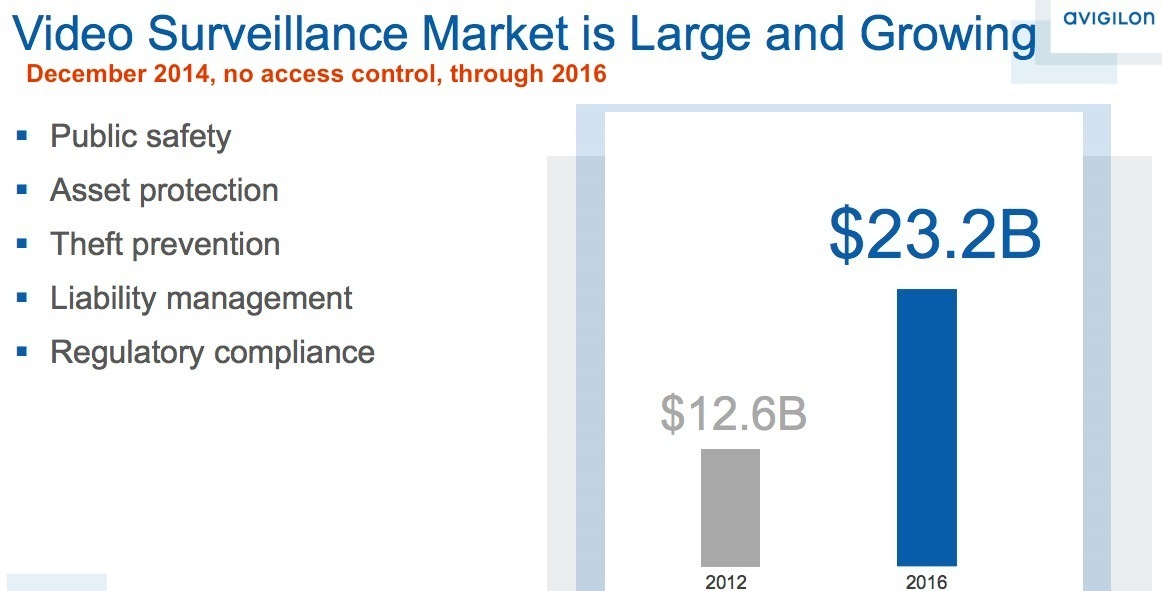 Now, in January, they have expanded their market sizing to video and access.

Though note, the years posted have shifted, with the new chart showing the projection for 2018, rather than 2016. The net/net is that access control does not add that significantly to total addressable market.

Avigilon has literally changed its mission. In December, the focus was simply on security: 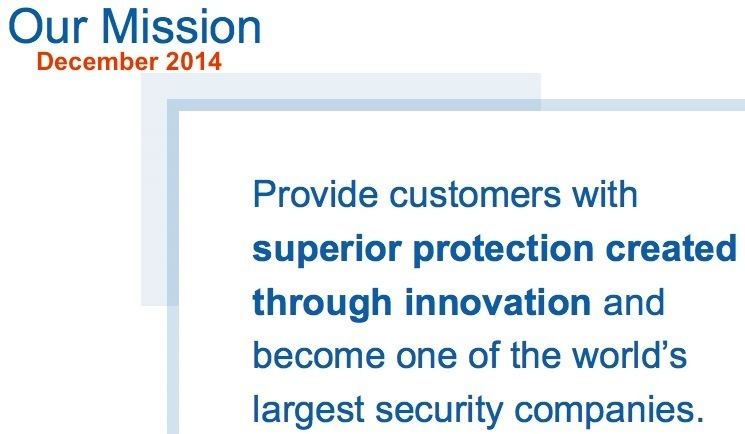 Now, 'business intelligence' is put at the center of their mission:

Given the 2 patent license purchases (OV deal and $13 million deal), it is not surprising that Avigilon is now emphasizing them:

Avigilon added its view of an end-to-end video analytic solution:

Indeed, given Avigilon's focus on end-to-end solutions, we think it would make great sense for them to own their own central station. Doing so, it could improve the overall value of analytics, make it easier to sell those services and provide a recurring revenue stream to their integrators.

A decade ago, Avigilon was one of the few companies to bet right on megapixel / HD, while most of the market was focused on video analytics.

Now, after the video analytics market collapsed, Avigilon is switching gears, focusing on analytics. No one has been able to make it work yet but Avigilon has immense resources to execute and are benefiting from the significant improvement in underlying computing technologies since analytics' rise and fall.

Avigilon Trumps Axis' Deceptive Ad With A Real One on Feb 15, 2016
Axis and Avigilon are reversing roles. While the IP video pioneer...
Avigilon 2014 Financials Disappoint Investors on Mar 04, 2015
Hikvision admits their equipment got hacked in a large government deployment...
Comments (15) : Subscribers only. Login. or Join.