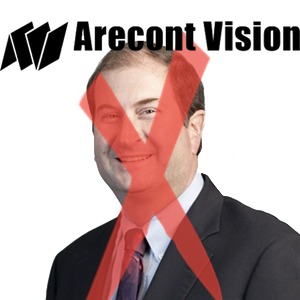 Days after IPVM reported Troubles At Arecont Vision, the public face of Arecont and the incoming Chairman of the Security Industry Association, Scott Schafer, has been ousted from Arecont Vision.

In this note, we share feedback from Arecont, examine the abrupt removal of Schafer, the issues behind this, his replacement, and the future for Arecont.

Schafer joined Arecont in 2009 and, at least at a brand level, was a major benefit to Arecont. Schafer had been the SVP of Sales and Marketing at Pelco. While 2017 Pelco is its own sad state, in 2009, Pelco was still a major player. At the same time, Arecont was a small company, first with H.264 MP, experiencing very high growth but with minimal brand recognition. Schafer's Pelco experience helped validate Arecont.

Schafer was ousted at the end of last week. His departure was effective immediately, with no transition period. He has been replaced by Raul Calderon, promoted to COO, as we explain below.

As we explained in Troubles At Arecont Vision, Arecont faces numerous issues, including:

Schafer was widely disliked, according to numerous people close to Arecont, many of which gleefully reached out to IPVM to share the news. Common themes included Schafer being condescending, a micro-manager on sales reporting and a detriment to their salespeople, especially when Schafer wanted to visit accounts, which often caused problems because of his attitude.

On the positive side, Schafer did a good job of publicly promoting himself and building his own personal brand.

Despite his ouster, Schafer is still the incoming Chairman of the Security Industry Association through 2018. Schafer can simply start his own personal consulting company, make it a SIA member and continue. Indeed, it gives Schafer more time to dedicate to 'thought leadership'.

Ironically, this is the second SIA chairman in a row who has been abruptly ousted from his company. Recall HID's CEO abrupt ouster.

Despite Arecont's problems and Schafer's role in them, we expect Schafer to have a number of companies seriously consider him. The security industry tends to be quite conservative, generally preferring to recycle executives rather than promote younger managers. Schafer is certainly well known and knows others in the industry, which is an asset.

Raul Calderon has been promoted to COO. For many years he has run operations, engineering and product management at Arecont, now he is taking over the other departments that Schafer used to run.

Calderon has worked at Arecont for 10 years, at their California HQ, so he knows the company and industry well.

As much as those close to Arecont expressed displeasure with Schafer, they were equally happy with Calderon's replacement of Schafer. Calderon was consistently commended for being knowledgeable and personable.

However, there are certainly challenges for Calderon. Calderon has not run sales since before Schafer arrived so there are questions about how he will run sales at Arecont, especially given their major recent sales challenges. Moreover, Calderon takes the helm amidst both organizational and industry challenges so it will not be an easy task.

Arecont, via Calderon, shared the following statement to IPVM:

"Scott Schafer is a good man and was instrumental in shaping Arecont Vision over the years. We wish him well as he becomes Chairman of SIA in 2018. I look forward to my new assignment and working with my team to shape Arecont Vision's future as well as the products and services we offer our customers."

Power at Arecont, though, firmly remains with the man behind the scenes, Michael Kaplinsky, the 'owner' of Arecont Vision [link no longer available]. While Schafer has acted as the public face for the company over the years, Kaplinsky has always been the ultimate decision maker when it came to resources dedicated to improving (or not improving) quality, the strategic direction of the company and whether or not Arecont would be sold (numerous deals have fell through over the years based on Kaplinsky's desire for better offers, according to those close to the company).

A key element will be what Calderon can do to improve Arecont relative to the constraints that Kaplinsky places him under.

Arecont has been in trouble for a number of years and the abrupt ouster of Schafer is simply the public confirmation of those problems.

The future for Arecont is tough. Kaplinsky and Calderon need to figure out what they are going to do now that both of their key long-term strategic advantages have been eroded. They once competed strongly on low-cost megapixel. That is gone. They more recently competed strongly being the main option for multi-imager cameras. This is fast eroding as competitors enter.

However, if Arecont can stop the quality problems (including the recent ghosting issues and ongoing beta firmwares) and try to re-build its brand (something that Schafer ignored), Arecont could be able to stabilize itself, which would be a positive first step forward.

Don't Deceive. Lessons From Scott Schafer on Mar 20, 2020
Deception is bad. We can learn some important lessons from Scott Schafer, a...
Imperial Capital Security Investor Conference 2018 Review - ADT, Resideo, Alarm.com, Arlo, Eagle Eye, ACRE, More on Dec 14, 2018
Imperial Capital Security Investor Conference is an event matching industry...
SIA Lobbyists Working On House Bill Ban of Dahua and Hikvision on Jul 10, 2018
While SIA is most known for ISC West, SIA maintains the industry's most...
Arecont Files Ch.11, Agrees To Sell To Turnaround Specialist on May 14, 2018
The long-anticipated sale of Arecont Vision is finally happening. After...
Arecont CEO And President Resign on Apr 18, 2018
This is good news for Arecont. Arecont's problems have been well known for...
ISC West 2018 Best and Worst on Apr 16, 2018
ISC West 2018 had strong attendance, modest overall new products, and a surge...
The 2018 Surveillance Industry Guide on Jan 16, 2018
The 300 page, 2018 Video Surveillance Industry Guide, covering the key events...
Top Manufacturers Gaining and Losing 2017 on Nov 03, 2017
3 years ago, IPVM statistics accurately and early identified the rise of...
Failed Arecont China Acquisition on Oct 25, 2017
Arecont cameras are not the only things that fail. Arecont spent months...
Comments (17) : Subscribers only. Login. or Join.