Audio for surveillance is a complex topic with a lot of confusion and poorly implemented systems out there. We regularly get questions from users, such as:

And finding the answers to these questions and others can be nearly impossible for those without an audio background.

So, in this guide, we aim to clear up the following topics:

In this guide, we bought and tested two popular Louroe Electronics products, a ceiling mic with audio interface and a door intercom station: 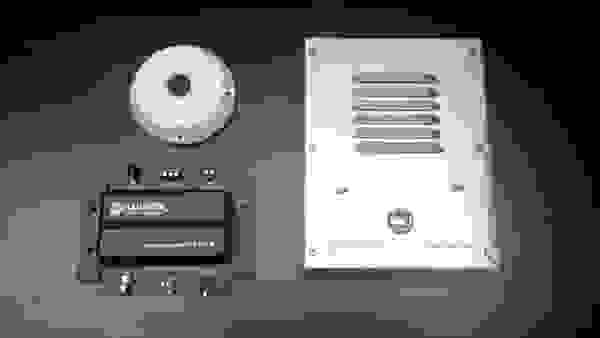 These are the key considerations in microphone selection:

For example, a mic mounted on the ceiling of a cell block or interview should be omnidirectional, as sound may travel in multiple directions. However, a microphone used near an entry door could use a directional mic, as the visitor entering the door is generally only facing one direction.

Mounting location: In surveillance, microphones are most often ceiling mounted, centered in the room they are intended to cover. However, wall mount models are also available, for use in door entry applications or where ceiling mounting is not possible. Finally, in some interview systems, microphones may be mounted to the table for better pickup of speech between parties.

Vandal resistance: If the microphone will be mounted in reach of subjects, a vandal resistant model should be used. Foreign objects such as paperclips or pens may easily damage microphone elements. Vandal resistant models typically include multiple layers of screening and smaller ports to prevent this damage. However, these protective measures dull microphone sensitivity moderately, so gain may need to be increased to compensate.

Many cameras include built-in microphones, the simplest way to add audio to the surveillance system, since no external equipment is required. However, these microphones are typically lower quality than external components, with less sensitivity and more noise. This makes them less usable in areas where higher quality audio is required, such as interview systems or cell block areas, where forensic use and court admissibility are factors.

For occasional use, such as door intercom or home look-in, built-in mics may work fine. Microphones do not need to be as sensitive to pick up voices in these smallers areas and noise rejection is less of an issue at these closer ranges.

To demonstrate the difference between built in and add-on microphones, we tested three cameras' internal mics versus the Louroe audio surveillance kit (~$215 online). The Louroe microphone offered the best combination of sensitivity and noise rejection by far, with built in mics either too sensitive, nearing distortion when subjects were at close range and picking up low frequency rumble and ambient HVAC noise, or not sensitive enough, losing intelligibility at 5-10'.

The screencast below reviews these results. A ZIP file containing clips from each camera (63.3 MB) is also available.

This video reviews the Louroe ASK-4 #300 audio surveillance kit used in our tests, which includes a Verifact A ceiling mount microphone as well as an IF-1 audio interface. Users should note:

Camera audio configuration varies between cameras. Some are as simple as on/off and audio level, while others allow multiple CODECs, finetuned control of bitrate, simplex and duplex settings, and more. In general, these are our recommendations:

In this video we review basic configuration of audio via the camera web interface.

At its simplest, audio may be monitored, and two-way audio talkback used, via the web interface of the camera. this is typically accomplished via buttons on the live view, allowing the user to mute or unmute the microphone, and push to talk using a PC mic.

VMS operation functions much the same, with some possible additional complexity:

VMS clients typically allow only one audio stream to be monitored at one time, though multiple streams may be recorded. This is true in both live view and playback. Though multiple cameras may be viewed via split screen views, only one stream will be heard.

The same is also true of 2-way audio. The VMS client operator must choose from a list of available speakers, and push a specific button to activate one. Some allow for a global push to talk to be used, allowing the operator to speak through all connected speakers at one time, but this is not common.

This video illustrates these key points:

One of the most common uses of audio in surveillance system is as a door intercom system. In the following examples we demonstrate how to operate, connect, and configure the Louroe AOPSP-PB with an IP camera and VMS system for this purpose.

This clip shows a typical scenario: a visitor entering the building, calling inside staff via the door intercom, and entering after being admitted.

Note: This clip was combined from two different Exacq exports. Exacq only allows one audio track at a time to be exported and played, so audio in and audio out were mixed together over the camera's video. No other editing was performed. Users may download the original clip including only audio in (Exacq standalone player).

In this video we review how the AOPSP-PB connects to an IP camera, including audio in/out and digital I/O for the intercom pushbutton:

Note, for those curious, we used 3.5mm screw terminal plugs for simpler installation requiring no soldering.

In this video we demonstrate how a VMS may be configured to work with the door intercom and associated camera to trigger a tone, switch video, and record event audio and video. Key points to note about this configuration:

Audio Usage In Video Surveillance Statistics 2021 on Jan 07, 2021
Audio usage in video surveillance remains rare but growing, new IPVM...
Video Surveillance Cameras 101 on Feb 25, 2020
Cameras come in many shapes, sizes and specifications. This 101 examines the...
Audio Usage In Video Surveillance Statistics 2018 on Mar 28, 2018
Audio is more widely available and easier to use than ever, with many IP...
Audio Analytics Aggression Tested on Nov 20, 2015
What if you could use your IP cameras to detect fights before they...
New Audio Surveillance Device Eliminates 3 Cables (Louroe) on Sep 16, 2014
Adding audio to IP surveillance systems can be a pain, often requiring a...
Audio for Surveillance Systems Tutorial on Oct 05, 2011
One topic on which we regularly receive questions is the use of audio in...
Comments (11) : Subscribers only. Login. or Join.