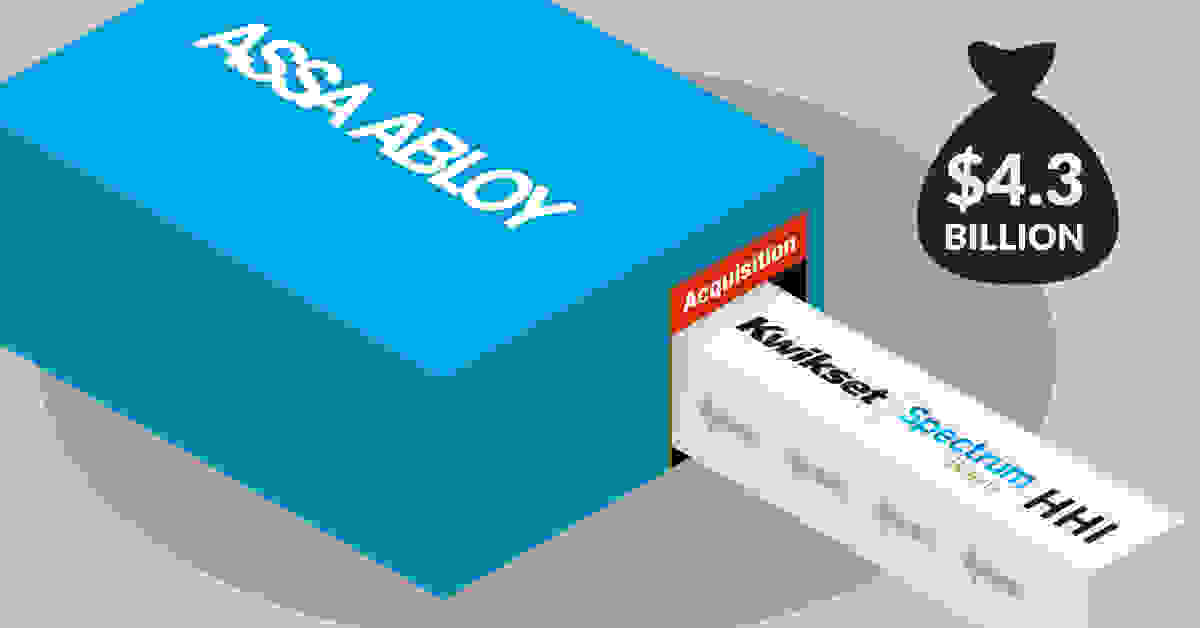 Kwikset was founded in California in 1946, and has become of the most commonly used brands of residential locks, holding shelf space, and stocked inventory in multiple large home-improvement retail stores (e.g.: Ace, Home Depot, Lowes).

Assa's deck on the deal overviewed the businesses as follows:

Assa will be adding ~7,500 employees as well as manufacturing facilities in China, Mexico, Philippines, Taiwan, and the US, as part of this deal.

Assa is paying $4.3 billion in cash, ~3x the business's annual revenue and ~14x HHI’s expected FY21 Adjusted EBITDA. It is a relatively high price to be paid but given Assa's powerful market position, it is possible that they profit from this deal.

Spectrum and its investors were thrilled with the deal, with the company boasting that Assa paid more for one division of Spectrum ($4.3 billion) than all of Spectrum was worth prior to the sale (~$3 billion). Spectrum's stock surged on the news: 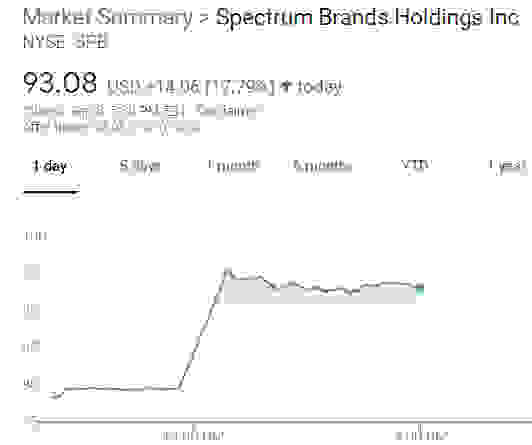 HHI's revenue is ~$1.3 billion but has been roughly flat for many years. However, the division has solid profitability with an adjusted EBITDA margin of around 19%.

While HHI's revenue growth has been stagnant, Assa said on the investor's call that they are aiming for a 5% annual growth rate going forward, on the Investor's Call, video embedded below:

Moving From Mechanical To Electromechanical

Currently, almost all of HHI's locksets are from mechanical lockset sales.

One of the major growth drivers Assa says they see here is the transition to electromechanical/digital.

Assa expects $100 million EBIT synergies from this deal, with execs elaborating on the investor's call about it both on the cost and revenue sides:

on the cost side, we see good opportunities in manufacturing capacity, utilization, distribution and material. And then, on the growth side, definitely growth opportunities in Latin America and South Pacific on the Asia side. And I think overall, also, let's not forget, we have a very strong demand creation, feet on the street in the US on the commercial side, and helping to leverage that in user in multifamily, and several other verticals, and our spec riders to really add fuel to the HHI Business.

Mostly Security But Some Plumbing

What Assa is acquiring is mostly security and hardware but they are also acquiring a ~$275 million plumbing business, per Spectrum's 2020 financials:

Assa says they are not sure what they will do with the plumbing business, on the investor's call.

Given the relatively high price for this deal, it will significantly increase the debt load of Assa but Assa told investors that it still plans to do its normal :

we have no no doubt, we will be able to continue to work on our strategy of accelerating our profitable organic growth and complemented with good add on acquisitions like we have done.... Yes, we will have the capability to do those 15 to 20 acquisitions per year like you are used [to].

Of the acquired HHI companies, Kwikset is the largest and most recognized brand of the group. The company sells through a network of retailers and distributors throughout North America and online.

The key profile is one of the most commonly used types as noted in Lock Keyways For Access Control Guide and while marketed and primarily used in the North American residential market, use and adoption has crept into the SMB commercial segment as well due to low cost, DIY-installability, and common availability.

Kwikset's 'KW1' type of key blank is one of the 5 most commonly used in the US, even by non-Kwikset brands, with locks, parts, and keys available nationwide including key-cutting robot kiosks:

One of Kwikset's most commonly used lock products is the SmartKey line of residential locks that are 'user rekeyed', eliminating the need to repin the cylinder to change keys, typically performed by a locksmith that can cost a hundred dollars or more per lock and requires a service call.

Instead, as the overview video below shows, an end-user can rekey their own locks with a special (included) tool and new/old keys:

Baldwin is another company in the deal, but unlike Kwikset is generally more expensive, available from fewer resellers, and does custom design and lockset kitting for upscale residential projects.

The company's entry into commercial access is primarily via a line of mortise & hospitality locks, but in price-sensitive segments like the hotel access market, it is not often used.

As Assa's acquisitions are focused on the residential market space already commonly DIY installed and serviced, we expect the immediate impact of the deal to be minor for most partners.

Given that Assa is one of the industry's largest companies, Kwikset now is armed with significant marketing, consultant influence, and operational cash.

Kwikset's manufacturing in Mexico and the Philippines may also benefit from sharing capacities with other Assa brands.

The majority of Assa's business in North America is in the commercial lock and access space, being the parent of Corbin Russwin, HID, Medeco, Norton, and Sargent.

However, the company also owns several residential-focused lock and smartlock companies like August in 2017 and Yale.

"HHI is an excellent addition to the ASSA ABLOY Group and constitutes an important strategic step in developing our residential business in North America."

Delvaux also says the acquisition "will further accelerate the transformation from mechanical to digital solutions” but details have not been released.

We do not anticipate major changes in Assa's commercial business but will update as information emerges.