In the past few years, as HD swept into living rooms, people have moved from watching video on 4:3 aspect ratios to the wider 16:9 format. This has carried over into surveillance where the wide screen HD format has become very popular. Indeed, in a recent reader's survey asking to choose between 4:3 and 16:9, the wide format won in a landslide: 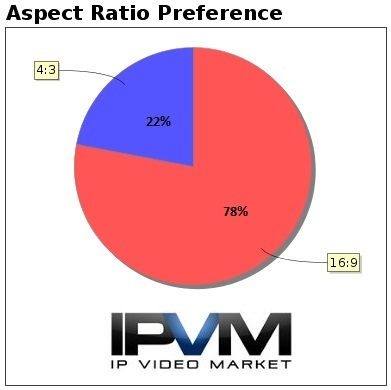 The premise behind 16:9 preference is that most scenes in surveillance are typically wide but not tall (i.e. there are no 10 foot tall people or 30 foot tall trucks, etc.)

Unfortunately, in practice, this assumption, while true, detracts from real world performance.

This surprised us as well but our series of tests, in a variety of real world scenes, showed over and over again clear practical benefits of 'full' 4:3 aspect ratio. These scenes include:

There are three key factors which affect which aspect ratio should be used:

What may cause confusion is that in TV, unlike surveillance, the wide screen aspect ratio actually adds more content to the left and right side. By contrast, in surveillance, you simply lose on the top and bottom. This image demonstrates how the two applications differ: 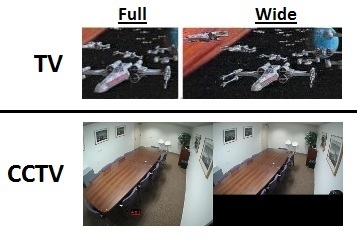 Downtilt: If cameras are installed with anything aside from slight downtilt, 4:3 better fits the field of view. This is because while 16:9 may remove potentially wasted ceiling or sky from the image, it removes portions of the scene closer to the camera, where pixel density is highest. Aiming the camera down further to compensate quickly begins to remove wanted areas from the scene, and may cut off subjects' heads, or simply not provide a deep enough FOV.

Telephoto zoom: In wide fields of view, objects at the periphery, such as trees, shrubs, walls, and other objects, are often irrelevant, adding nothing to the scene. However, when using telephoto lenses, the field of view is more likely to contain relevant information. When FOVs are only 5-10' wide, capturing an extra foot of depth provides proportionately more information than in a wide field of view.

Both of these factors, and their effects, are demonstrated in application images below.

In this example, with a camera located at ceiling height, nearly two full seats at the table are lost when switching to 16:9, without the benefit of removed wasted information from the image. Subjects' actions while seated in these two seats would likely be difficult or impossible to determine, though identification would be possible as they circled on either side of the table to sit down.

This lobby example demonstrates what gain the added depth of 4:3 provides:

In the 4:3 example, the entry doors are covered, as well the walkway near the camera. Using 16:9 aspect ratio, one of the other is sacrificed. Aiming the camera down to better capture the near area moves the camera too low to capture many subjects' faces as they enter. Aiming it higher to capture faces, the area closest to the camera, with the best chance of recognition, is sacrificed.

This scene, a wide angle view of the intersection, is one example where 4:3 provides limited benefit over 16:9:

The 16:9 image contains less wasted space, cutting off landscaping and skyline which the 4:3 image does not. Landscaping especially may create extra motion in the scene, and increase bandwidth and storage needs.

The advantages and disadvantages of 4:3 and 16:9 are prominent in this outdoor parking lot scene, as well. Using a telephoto lens, the 16:9 image loses an entire lane of traffic in this example:

However, when using a wide angle lens, only part of a parking space is lost:

Unlike the intersection example, however, 16:9 does not remove any completely irrelevant information. The portion of the parking space lost is relevant to the scene, however small it may be.

Though 4:3 likely fits most scenes better, there still may be a desire to remove some unwanted portion of the scene. This is possible using two camera features:

Carefully check that cameras marketed as HD also support the 'full' 4:3 aspect ratio. Cameras that do not should be treated as, at least, a minor deficiency.