For years, Arecont Vision had an advantage with their 10 megapixel cameras as few rivals offered more than 5MP. Indeed, they capitalized on it by claiming one could replace 32.7 analog cameras, pushing pixels per dollar, and more. But now, with 4K cameras common and 12MP and even 20MP available, what is the real advantage to their MegaVideo line?

We bought a 5th Generation 10MP model, the AV10215, to find out, testing against current 4K and 12MP models from Axis and Bosch in full light and low light scenes narrow and wide. Here is a preview: 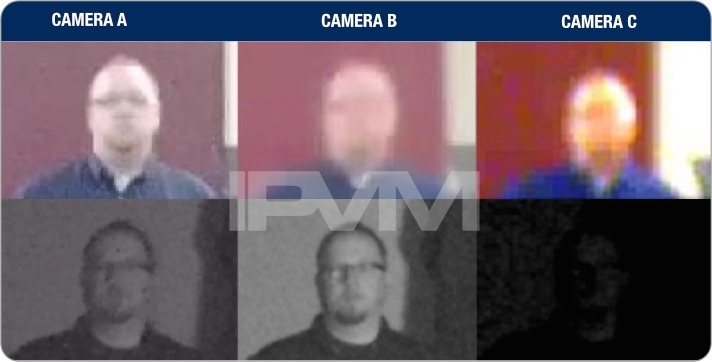 Note: This is part of our test of Arecont's latest generation G5 line. Readers should also see our tests of the AV1215 Stellar low light camera and Arecont HD WDR G5 Camera Tested.

Note: Despite this being marketed as Generation 5, all of these issues were present in past Arecont 10MP cameras we have tested, as well.

Note: Arecont lists one 4K model, the AV08ZMD-400, which claims 30 FPS. However, this model is not yet shipping, despite Arecont first announcing 4K more than two years ago.

The AV10215PM-S camera shares the same form factor as past Arecont MegaVideo cameras, a compact "hockey puck" box camera. The most notable new addition is remote focus and zoom, controlled via an additional connector on the rear of the camera wired to the lens (in addition to the DS auto-iris cable).

However, Arecont recommends only two lenses for it, neither of which include remote focus/zoom. The zoom lens options used with lower resolution models are rated for 3MP only. 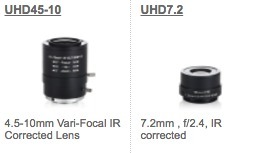 We take a look at the physical construction of the camera and new zoom lens here:

The max frame rate (specified and tested) of the Arecont G5 10MP is 7 FPS, much lower than most current 4K cameras (typically 30 FPS) or 12MP models (15-20 FPS). Additionally, there are two issues which worsen this low frame rate limitation:

In our tests, frame rate dropped to ~3-4 at night, seen below.

Additionally, both the camera's web interface and VMSes allow users to set frame rates above 7, which may be confusing and problematic for users unaware of these limitations. Some may expect 10 FPS for example, but only achieve 5-6.

As do VMS platforms, seen here in Exacq: 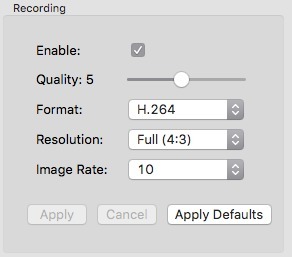 In our tests, the camera occasionally did achieve 10 FPS, as displayed by Exacq and confirmed in stream analyzers. However, this was not consistent, and we do not recommend users expect 10 FPS at 10MP resolution.

We tested the 10MP model against current competitive 4K and 12MP cameras in a wide open office FOV, seen below: 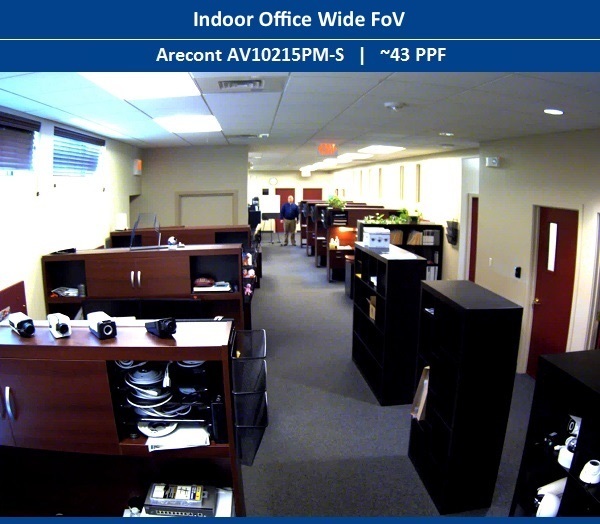 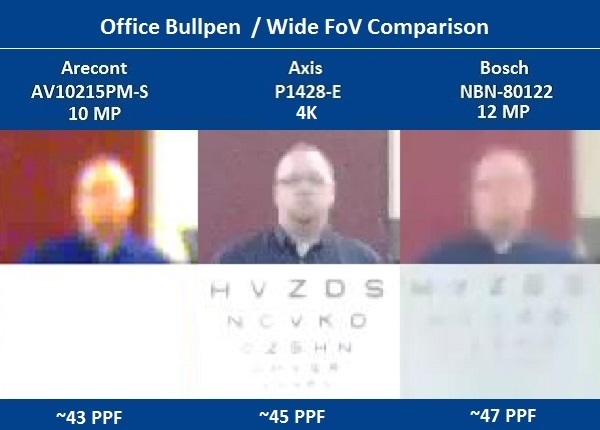 Next, we tested in a narrower FOV to show differences when PPF is high (~186 in the 10MP model). 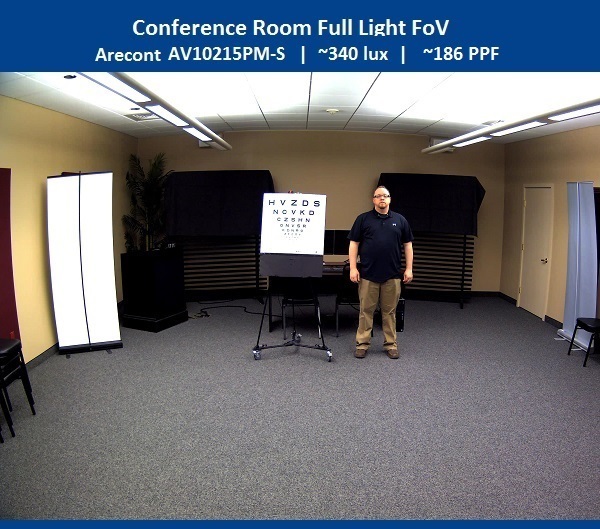 With PPF at these high levels, details produced by the cameras are roughly similar. Subject details in the Bosch 12MP camera are slightly blurred. 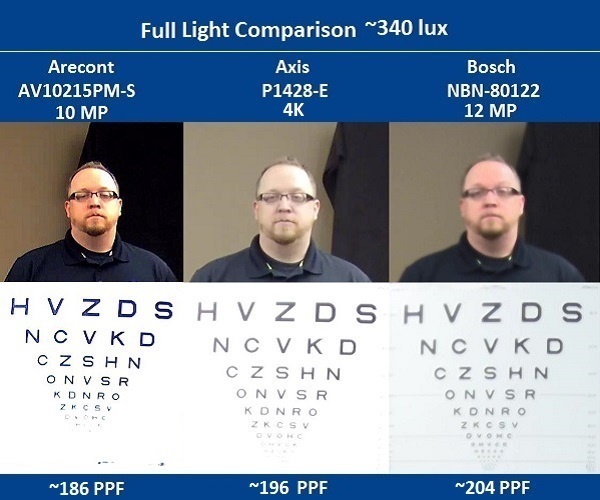 In low light, 1 lux and below, the Arecont G5 10MP performed very poorly at full resolution, almost totally black, with neither the subject nor test chart visible at all. Turning binning on improves images drastically, with the subject visible (though no details) and some background objects discernable.

Because of this drastic performance difference, the comparisons below were done with the Arecont 10MP camera in binning mode. 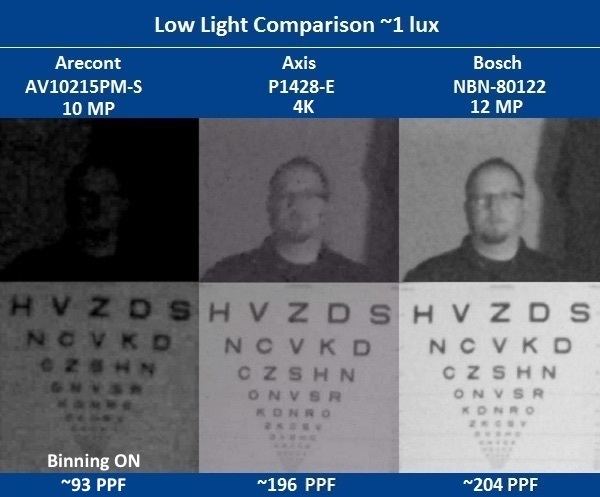 Finally, in a darker scene, ~0.1lx, the Arecont G5 10MP is almost completely black, with no details of the subject, chart, or background: 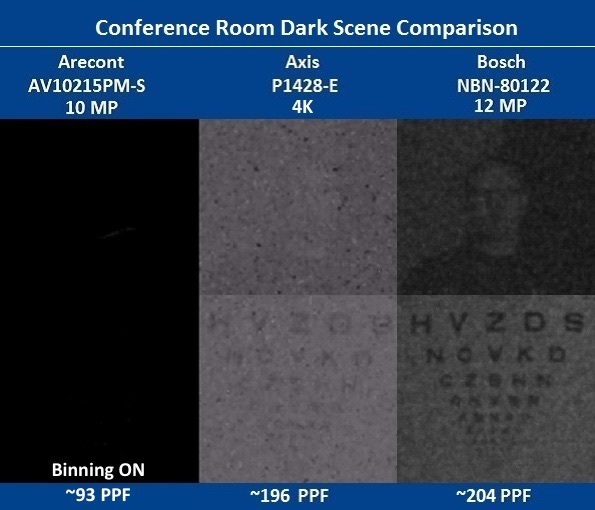 The Arecont 10MP had the highest full light and low light bitrates of any camera tested, but a margin of 2-3 Mb/s in both scenes. At 0.1lx, bitrate drops substantially, while the Bosch 12MP camera spikes higher. However, the Arecont camera produced no usable images at this light level, simply a black scene, while others produced at least the test chart, with Bosch roughly showing the subject.

Note that bandwidth was tested at 5 FPS, the highest frame rate the Arecont camera streamed both day and night. 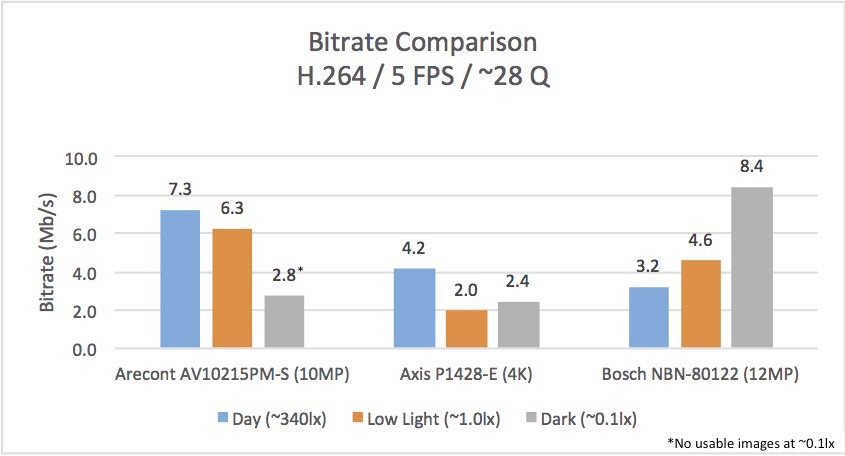 Binning reduced bandwidth by 30-40% in low light scenes. Note that at 10MP resolution, the camera produces no usable images at 1 lux or 0.1lx, while it does when binned. 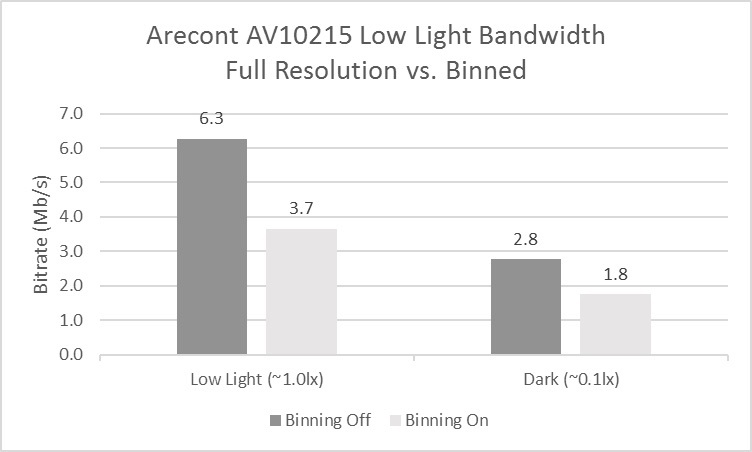 The bulk of the G5 web interface remains unchanged from past MegaVideo cameras, seen in the screencast below. Note that G5 cameras default to "Balanced" exposure mode, which uses up to 80ms exposure, resulting in blur in low light scenes. Users should use "High Speed" mode to prevent blur, as all other modes use varying levels of long exposure.

Axis Boasts Kicking Arecont Out of Google on Jul 11, 2016
Axis has displaced Arecont as the standard IP camera for Google, boasts...
Selling Super High Resolution Cameras on Jul 11, 2016
Is bigger better? In the past decade, the surveillance industry has moved...
Arecont HD WDR G5 Camera Tested on May 31, 2016
This concludes our testing of Arecont's G5 series, including our previous...
Arecont Stellar Camera Tested on May 25, 2016
Arecont offers:  STELLAR (Spatio TEmporal Low Light ARchitecture)...
Comments (1) : Subscribers only. Login. or Join.