Move over ADT? It is certainly what investors have feared for ADT, especially since Amazon acquired Ring.

[Update: We spoke with Amazon and have more details on operations and limitations at the end of the post]

Now, Amazon has launched their own home security services, including alarms, video surveillance and installation:

The Amazon employee reference is especially interesting since historically Amazon has used freelancers with mixed results (see our test). However, given the size of the home security (i.e., 1 out of every 5 US homes have systems already, it could justify such direct employees and be a major threat against ADT).

Amazon is offering 5 packages to start, with the security / video one starting at just $320 including installation, very low for conventional security offerings: 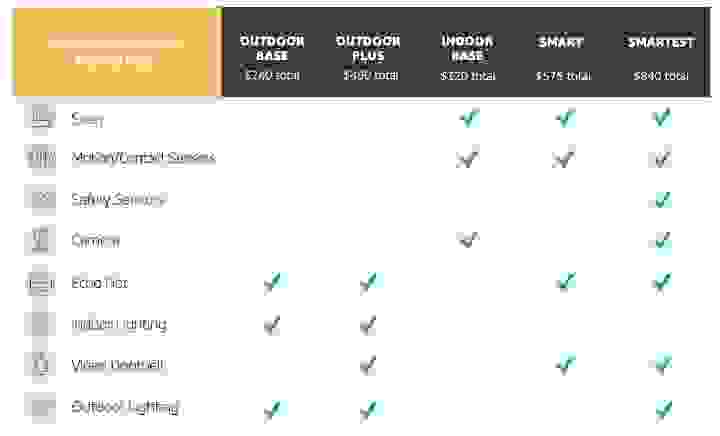 Plus, for that price, Amazon is committing to have an installer come to the homeowner's house twice:

And Amazon is throwing in a modern version of the old 'Fake TV':

Self-monitoring will be free, as it is for other consumer services like Simplisafe. However, for central monitoring, we have not yet seen what monthly pricing will be (or if it will be offered). That, of course, will be a key element, given traditional providers charge $30+ per month.

One major concern is licensing. In most US states and many countries, installing home security systems requires licensing. While Amazon's marketing lists 'Amazon employees' to 'take control of your home security' it is not clear how many and or where will be licensed appropriately.

On the one hand, given Amazon's success and size, it is easy to conclude that ADT will go bankrupt and this is the end of the residential security market. On the other, Amazon is not always successful, and their CEO literally encourages failure, so it is possible that a few years from now, this is looked back on as a gimmick or half-hearted effort.

We spoke with Amazon and have the following feedback on key points:

Overall, the requirement of self-monitoring and self-police dispatch makes this a significantly less valuable offering than conventional systems or even Simplisafe with their optional central station monitoring.

Amazon Marketing Pro Installs of Amazon Security Systems on Apr 25, 2019
Is Amazon a threat to conventional providers like ADT, Vivint and Brinks...
Bad Move: ADT Markets Rival Amazon on Aug 08, 2018
Amazon may be lining up ADT as its next victim but ADT is happy to promote...
Simplisafe Acquired At $1 Billion Valuation on Jun 29, 2018
Simplisafe, the competitor alarm monitoring companies historically most...
Amazon Ring Launches $10 Monthly Professional Alarm Monitoring on Jun 15, 2018
Amazon's Ring has announced an alarm system with 24/7 professional alarm...
ADT Stock Drops 50% Since IPO on May 17, 2018
It has been a brutal 4 months for ADT. They first expected to IPO at...
Comments (63) : Subscribers only. Login. or Join.