ADI moves hundreds of millions of dollars worth video surveillance equipment each year.

And now, they are disrupting the channel, cutting out manufacturers.

We bought an IP camera and NVR from ADI's new W Box line to learn more. The products are shown below:

Within minutes of starting our test, it was obvious who they were OEMing and how significantly this is going to impact the industry.

With just a few changes (reviewed below), W Box is certainly a Hikvision OEM. Camera and NVR performance, feature set, and VMS compatibility are quite similar to equivalent Hikvision models, at similar price points.

But Better Than Hikvision?

However, there are some potential advantages to integrators using W Box:

Given ADI's broad reach and aggressive positioning of W Box plus Hikvision's acceptable quality for the low to mid-end, we believe this will be a significant positive for ADI and negative for their branded 'partners' like Axis (M series), FLIR (Digimerge), Samsung, Speco, etc. Even Hikvision branded products will be impacted, though, of course, Hikvision will make it back (at lower sales prices) via the W Box OEM sales. Dahua, though, clearly loses here.

This underscores the struggles the industry is going through as it adapts to the reality of the $100 MP Era. ADI is being undercut by cheap online resellers, and now ADI is striking back by cutting out their branded manufacturers, many of whom OEM Hikvision or other Chinese offerings anyway.

W Box is officially available only from ADI, to anyone with an account, though a few unauthorized online sources may be found.

Based on dealer pricing, we expect street price W Box and equivalent Hikvision models to be similar. For example, estimated street price of the 31BF40 is ~$150 USD, similar to the Hikvision DS-2CD2032-I online pricing. However, dealers may be able to purchase these equivalent W Box models for slightly less than Hikvision from ADI.

Estimated street price of models used in this test:

With similar performance to Hikvision models, W Box is a solid choice on the low end, further strengthened by extended warranty and better stock at ADI.

However, end users and those without ADI accounts may still prefer Hikvision, as it is readily available from other distributors as well as online sources.

One note of warning: Users should be sure to change default W Box passwords, especially when connected to the internet. Otherwise, they are essentially as vulnerable to hacking as pre-5.3.0 firmware Hikvision product.

The web interfaces of W Box and Hikvision models are extremely similar, seen in the video below. The color scheme has changed, and some menu options have been consolidated/removed, but overall controls function in the same way, with default settings nearly all the same.

Moreover, looking up the MAC address of the camera and NVR, the OUI is clearly listed as Hikvision:

The 21BF40 was detected by Exacq as an ONVIF camera. However, changing the driver to Hikvision, all features functioned the same as other Hikvision models, with camera side VMD available, and no issues changing camera settings via the VMS. 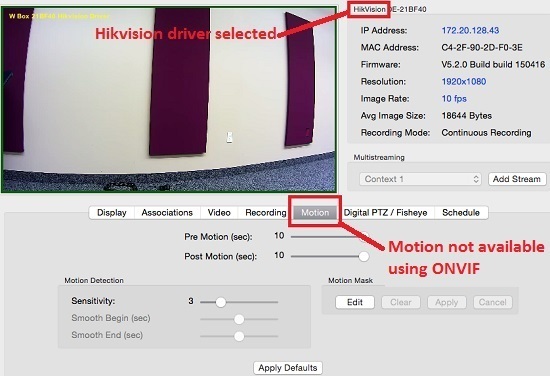 There are slight physical differences between the W Box and Hikvision models. The housing of the bullet cameras are different, with W Box more square compared to the round Hikvision model, though both use the same LED layout and are approximately the same size.

The NVR front panel is different from Hikvision's, as well, but LED display is the same.

All W Box IP cameras and NVRs come with a 5 year warranty [link no longer available], compared to only 3 years on equivalent Hikvision models. Further, since W Box models are now stocked at ADI, same day replacement is much more likely than with Hikvision.

W Box tech support is provided by the local ADI branch and/or via email, which could be an issue. We have not been able to determine how good or bad this is.

The W Box models tested use a firmware 5.2.0, which is prior to Hikvision's "anti-hacking" updates made in 5.3. This means that the camera does not require the "secure activation" process found after this update, and does not require users to change default passwords (nor does it warn them).

It is unknown whether W Box will choose to implement these improvements or not, though they leave themselves vulnerable if not, with only a different default password ("wbox123" instead of "12345") as protection.

We tested the 21BF40 against Hikvision and Dahua equivalents to compare image quality, in our typical FOV: 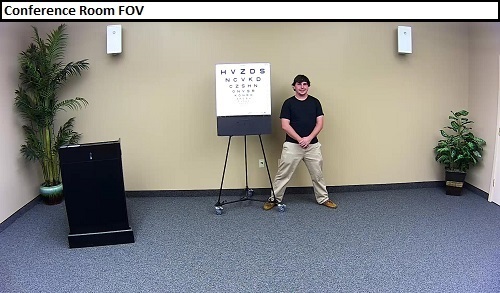 In full light, image quality is very similar to other cameras, with no notable issues. Notably, the camera's field of view is nearly identical to the Hikvision DS-2CD2032-I, both using 4mm lenses. 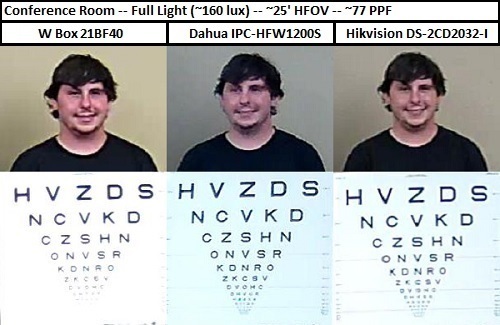 The 21BF40's IR illumination pattern was very bright in the center and dark at the edges, and issue not found in the Hikvision 2032. Our subject is undetectable in the corner of the room in this FOV: 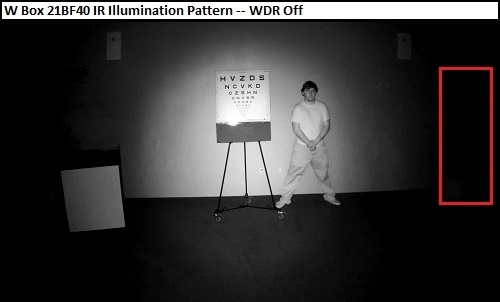 Visibility is drastically improved when turning the camera's digital WDR on, seen below, though visible noise increases, as well, driving bandwidth up. 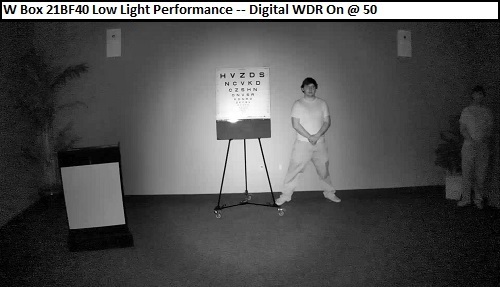 Using default settings, the 21BF40 provides details of the subject and chart similar to the DS-2CD2032-I, and moderately better than the Dahua bullet, which is much noisier at this light level. 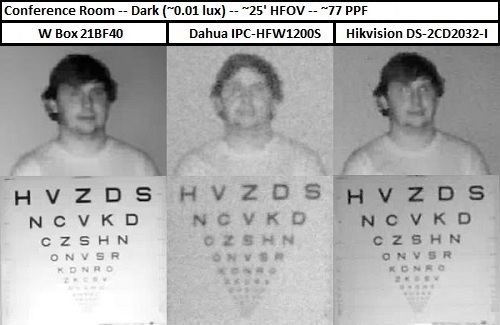 ADI Secretly Relabels Dahua on May 05, 2021
ADI has started to secretly relabel Dahua with Huawei chips inside, IPVM has...
ADI W-Box Dropping Hikvision, Using Sunell (Tested) on Mar 05, 2018
The next generation of ADI's W-Box (ADI's competition against their...
Bosch Divar NVR Tested vs Dahua on Oct 05, 2017
Bosch has a partnership with Dahua. But what type of partnership is it? How...
ADI "HD Cameras As Low As $29.99" on Jan 06, 2017
ADI has reached a new low - literally. [premium_content] ADI is making no...
How Hikvision Beats Its OEMs on Dec 08, 2016
Hikvision GM declared that they are not aggressive with their...
Analyzing ADI Branch Sales on Jan 29, 2016
ADI's branches are the heart of the trunkslammer / low end installer network....
Hikvision Ezviz Tested on Dec 28, 2015
Last month, Hikvision Launched Direct End User Sales with their Ezviz line,...
An Inside Look Into Dahua on Dec 16, 2015
Dahua is the 'other' billion dollar plus Chinese manufacturer. Large in its...
The Siliconization of Surveillance Cameras on Oct 29, 2015
This is an insightful observation from Vicon's CEO Eric Fullerton [link no...
Warning: ADI and Tri-Ed Video Products Major Security Risk on Sep 22, 2015
Recently, ADI and Tri-Ed both started OEMing Hikvision products. Reference -...
Anixter/Tri-Ed Northern Video Tested on Sep 18, 2015
ADI is an IP video manufacturer now (see IPVM's ADI W Box test results). And...
Anixter "Probably The Most Ethical Guys In The Business" Says Anixter on Sep 11, 2015
Also, least humble. And, unfortunately, most delusional. Anixter...
Sorry Manufacturers, ADI Is Beefing Up W Box on Sep 01, 2015
More bad news for manufacturers. Not only is Hikvision and Dahua driving the...
Mega-OEMs vs Micro-Relabelers on Aug 04, 2015
Manufacturers like Dahua are sold under dozens, if not hundreds, of aliases...
ADI W Box Accelerates Race To the Bottom on May 22, 2015
ADI is aggressively ramping up promotion for its new white label brand "W Box...
Comments (39) : Subscribers only. Login. or Join.