How much wireless is being used in video surveillance? While wireless becomes more and more ubiquitous for smart phones and tablets, what is its uptake in the video surveillance market. In this note, we examine usage patterns across 100 integrators globally including detailed statistics of cameras using wireless connections.

To start with, it is important to consider the 3 fundamental ways wireless can be used in surveillance:

In our survey to integrators, we asked the following questions about their wireless use: "In the past 3 months, what percentage of all cameras you deployed used a wireless connection to your server/recorder?" Since wireless use is clearly a niche, we phrased it to make as broad as possible, covering all 3 scenarios above.

The histogram below provides a visual overview of how integrator's wireless usage varied: 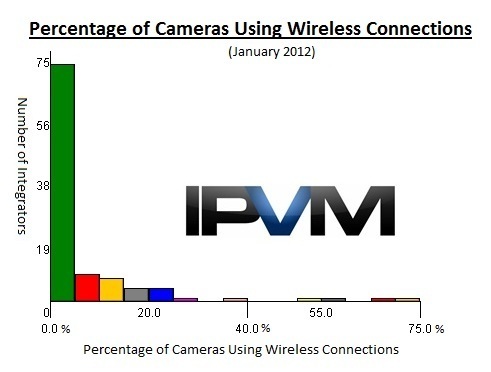 Next, let's look at a number of key wireless metrics:

Here's what this means:

While the numbers are quite low, we suspect that the percentage is up significantly over the last 5 - 10 years. Since this is our first formal survey, we are guessing but it is likely that the overall percentage was under 1% in the past decade.

Going forward, we would expect wireless surveillance usage to increase modestly against wireline with greater use of low cost wireless equipment (like Ubiquiti) and as new technologies such as 'gigabit WiFi' and whitespace radio emerge. However, wireless connections will likely remain significantly under 10% of all surveillance cameras as the lower cost and higher reliability of hard wired connections continues to drive the market.

Video Surveillance Statistics Directory Vol 2 on Mar 18, 2012
In this report, we aggregate and present numerous statistics about how...
Comments : Subscribers only. Login. or Join.