Dropcam has become the hottest startup in surveillance by going completely against the traditional channel model, selling direct off their website, on Amazon, Apples stores and now Target.

Because of that, it was quite a shock to see them at the industry's biggest channel focused event, ISC west, with a fairly big booth: 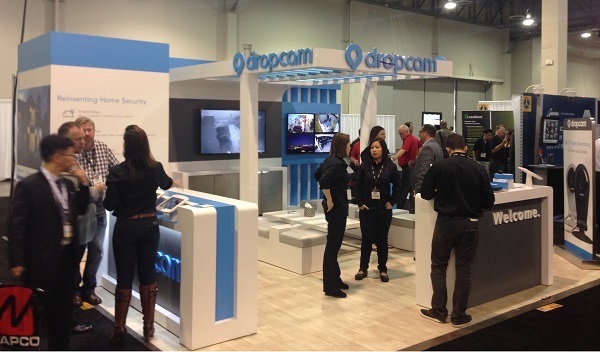 We talked with them about why they are at the show and what their plans are.

What will be interesting here is how much Dropcam will give, both on product margin and RMR? My gut feel is that traditional security companies will demand far too much than what Dropcam can justify / is willing to pay, given Dropcam's established pricing / cost structure.

Clearly they are feeling the impact of several other vendors getting into the low end consumer Cloud camera space and looking to grow their business beyond what their own marketing can handle. Still a very weak offering for an IP camera and no outdoor version.

It does not strike me as a defensive play because (1) Silicon Valley startups think who they are and (2) they just spend $100,000 like it was nothing out of their massive war chest of VC funding.

They told me today that they have struck a deal with Frontier Communications to be their first big partner, but compensation details were not forthcoming, other than the customer would pay the same price as if they installed the camera(s) on their own. That means that Dropcam is willing to Drop(cam) their shorts on Gross Profit in exchange for market share. (Nothing on Frontier.com supports any of this, by the way.)

When I asked how we might act as a partner, their answer was to make them any reasonable offer. In fact, ISC West to them is a fact-finding mission, they told me. Nest (see nest.com) sold for $3.2B to Google, which seems to be the end goal for Dropcam too. Check out this article about five reasons why Nest sold out to Google, and you will no doubt agree that the comparison between Nest and Dropcam are very strong:

Even their websites look alike!

So go ahead, everyone -- be a Godfather and make Dropcam an offer they can't refuse! You'll make some percentage of each $149 or $199 camera (probably whatever Best Buy gets) and some percentage of the $99 (7 day) or $299 (30 day) Cloud annual recording contract per camera. For Frontier this makes sense because they are already in your home setting up cable TV and phones. For anyone else, it's going to be a thin margin indeed.

Bottom line, for a better deal and better and more scalable product with a longer track history I'd look at Smartvue and a bunch of others that can accommodate a wide & open variety of cameras instead of embracing what is essentially what Apple would have developed if they invented a video surveillance system.

Does anyone know how well iSee is doing, and if Dropcam is looking to take away some of their marketshare? I know there are a couple of traditional alarm installation companies that are familiar with Napco and are therefore selling iSee products. Dropcam just seems like an iSee camera designed by Apple.

Napco's total corporate revenue has been flat at ~$70 million for years and that includes everything Napco sells, intrusion, access, etc.

By contrast, Dropcam's video only revenue, by all accounts is skyrocketing from nothing to tens of millions in the past few years.

I am not critiquing iSee's product. I am just saying, from a market share standpoint, iSee is not anywhere close to where Dropcam is. That most certainly reflects the power of selling things over the Internet, on Amazon, etc. rather than the traditional security channel model that Napco uses.

On the other hand, Dropcam would be a good company for Napco to buy. If they could afford them.

Napco is all about the RMR, after all.

Napco has a publicly traded market cap of ~$130 million.

Dropcam raised $30 million last year at a valuation of at least that much if not a lot more. Not saying Dropcam is better or worth it but valuations for Silicon Valley startups, especially ones that have demonstrated traction, are super high. This is a good rationale explanation of eye popping startup valuations.

Pathetic it is, but we've been through this before, and more (remember 1999, anyone?) At least Dropcam is not Vaporcam!

I am interested to see what happens with this side of the surveillance market, in the past year I have seen a huge increase in consumer demand for home surveillance systems (I've been selling a lot of Hikvision and Axis). At the same time, we have this huge consumer market that wants something inexpensive, easy to setup/use. Dropcam seems to meet those expectations, but the market is still young and untested. I can see smaller dealers getting nervous and jumping on board with dropcam (or similar) to stay "competitive" and offer their customers something rather than nothing.

Dont get me wrong, I wouldnt put one of these in my house and I wouldnt sell it to anyone either. But I'm sure a lot of dealers would.

I don't discount Dropcam's success, but I really don't see how they could ever be a security channel factor.

Given that DIY installation of a Dropcam is about as technically challenging as checking Facebook, do they really need installers?

Until they release a camera that is outdoor rated, with interchangeable lenses, and can be connected to a wired network, there is just no need for installers.

For now, it's a camera for checking on pets during your lunchbreak, or maybe staring at the big screen in your living room while you're at the office.

"Until they release a camera that is outdoor rated, with interchangeable lenses, and can be connected to a wired network, there is just no need for installers."

Yes, and all of that is likely to happen in the next year.

(1) Lots of industry insiders are already talking about this, based on discussions directly with Dropcam, i.e., it is in development.

(2) They got a ton of money to do all of this and they won't spend it all just on trade show booths, etc.

(3) They need to move up market to drive revenue. The VCs are expecting huge repeated year over year growth and there's only so much you can do selling onesies and twosies over the Internet to homeowners.

I sold a foursie today. Did that help any?

Seriously, though, I want Dropcam to make an NVR, or a VMS. They're probably the only surveillance company that does use exeperience and product design right; there's no reason why cameras have to be ugly and NVRs difficult and confusing to the end user.

My gues is that they are looking for a different distribution channel, right now DSC, DMP, Honeywell, alarm.com...etc, all use the same/similar cheap wifi cameras that are not always easy for the end user to setup/use. Dropcam could be looking into that end of the market. Just a thought.

I could see those companies being interested. The challenge is that DSC, Honeywell, etc. are buying low end cameras directly from Asia, relabeling them and putting them as part of their system / solution.

What I wonder here is how Dropcam could fit with these companies. Presumably, Dropcam wants to own the customer relationship but so do the big security companies, so can they make a deal?

If I was dropcam I would license the hardware/software. Will they go for it? Who knows.

They are spending millions developing their own brand, so going the OEM route would strike me as counter to that strategy.