IT vs Security: Surveillance 'Ownership' Stats

Who calls the shots when it comes to video surveillance? Given the close proximity of the system to several distinct departments, we were curious to see has ultimate 'ownership' of end user's surveillance systems and equipment. We reveal and analyse the answers in this note.

In our recent global survey of surveillance end users, we asked: 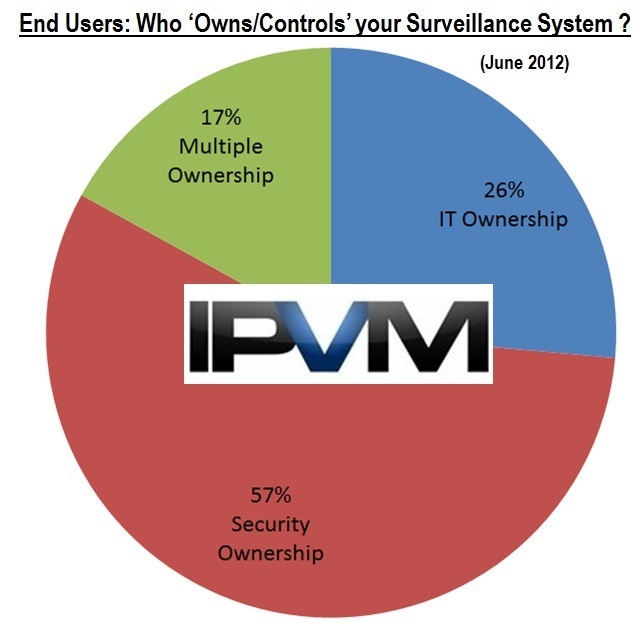 We left the question open to any answer, and asked end users to explain their situation in detailed comments. From the chart above, it is easy to see answers broke in three main groups:

The results may be skewed towards IT as they are based on an online survey of 60 end users who were disproportionately from rich western countries, a majority of which managed large 500+ camera systems. Keep this in mind as you interpret the results.

The answer to this question clearly has political significance for many end users. "Ownership" often indicates "budget" or human resources that "support" responsibility alone does not provide. As such, the idea of "ownership" is not the same across all respondents, but it does characterize the final authority on buying and support decisions. In the section below, we examine some of the trends that emerge from the detailed responses:

Security Needs IT: Frequently Security purchases and/or operates surveillance systems, but IT is responsible for maintaining them. Categorical 'ownership' may vary from one end user to the next, but the incorporation of IT resources into operations are common regardless of system size or market vertical.

How does IT get involved? The purpose of IT and Security are different in many organizations, with entirely different organizational focuses. In many cases, IT has no operational interest in video surveillance beyond ensuring devices are online and functioning, while Security in heavily dependent on the visibility of the system in every phase of operation. Despite having different operational focuses, Security and IT are often intertwined. The detailed answers our end users provide describe 'why' this situation is often present:

Communication is Key: When sharing ownership, mutual system involvement and communication is critical to success. Because the importance of operational video has a heavy bias towards Security, and may be 'just another system to support' for IT, many answers describe the critical importance of deliberate coordination to keep all parties working toward the same goals:

Not surprisingly, network video systems have expanded stakeholders to include departments other than Security. The days of a truly 'self sufficient' Security department appear to be ending. Ownership of the system may belong or be divided among non-traditional operational groups, but this circumstance seems to amplify the 'voice' that traditional Security departments have in coordinating work and defining system performance goals.