What's Next for Ubiquiti Surveillance?

Last year, Ubiquiti hit the surveillance market hard with a line of $100 HD cameras that generated a ton of interest. However, over the last 6 months the company has been besieged with counterfeiting issues and a dramatically falling stock price. While the company planned for a next generation PRO surveillance offering in 2012, it is not yet available. In this note, we examine what is upcoming for Ubiquiti and how it might impact their positioning in the surveillance market. 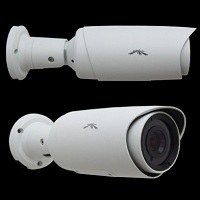 Ubiquiti's awaited next generation camera, the AirCam Pro, has been pushed back until sometime in 2013. Several improvements are claimed over the original AirCam models:

Based on these planned features, the AirCam Pro stands to address many complaints more sophisticated users had about the original AirCam. However, most are more or less status quo for professional IP cameras in 2012 (except temp/humidity sensors), and do not break new ground.

Though the AirCam Pro is still months away at the least, Ubiquiti has made some improvements to its existing AirCam line via an updated firmware release. Features included in this release that were not found in the original:

Only the VBR and authentication improvements will be useful to those interested in using AirCams with third party systems. Though they are nice additions, the more useful on-camera motion detection and edge storage features are only available in end-to-end Ubiquiti surveillance systems.

Though the above improvements are useful to those using AirVision and original AirCam models, Ubiquiti has still made no moves to add ONVIF support, one of the features most requested by users of their support forum. The addition of ONVIF to the low-cost (under $100 online) AirCam line would remove a key obstacle to adoption by those using third party VMS systems. Ubiquiti has stated that ONVIF is "being considered" for 2.0 releases (AirCam Pro and AirVision), but no timeline, nor feature support, was given.