Camera size is a key selection consideration. Some prefer cameras be overt, so subjects know they are being watched, hopefully preventing problems. Others prefer cameras be as unobtrusive as possible, to best blend in with the architectural environment, and catch unsuspecting perpetrators. Appealing to this second camp, Vivotek has announced the FD8136, what they claim is the "world's smallest IP fixed dome". In this note, we overview its features and compare size and pricing to Axis and Sony models also cited as compact options.

The FD8136 is a compact minidome with the following features:

This image from Vivotek's marketing material illustrates the dome's size: 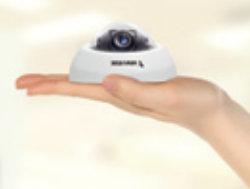 The FD8136 is available now, with an MSRP of $310 USD. Based on other Vivotek products' MSRP and online pricing, the FD8136 should have an approximate street price of about $240.

Undeniably, the FD8136 is small, but only moderately compared to some competitive compact minidomes. The Axis M30 series, for example, is 3.6" in diameter, and 1.1" tall, though requires that most of the camera be recessed in the ceiling (~4" total depth). Axis's M31 series and Sony's X series domes, on the other hand, are both completely surface mount, with similar dimensions slightly larger than the FD8136: just over 4" in diameter, and approximately 2" tall. In short, while Vivotek is not necessarly wrong, and this may be the smallest network dome camera, the difference is modest, and in practice, most likely negligible.

The models above are some of the most likely mainstream competitors for the FD8136, though all have different featuresets. Sony's X series, for example, are available in both 720p and 1080p resolutions (users may see our Sony shootout for more performance information), while both Vivotek and Axis's models top out at 1MP. Sony's models also offer day/night capability, whereas others do not. Lastly, since it requires a few inches of depth, if the ceiling is inaccessible, the Axis M30 series is inappropriate.

Compared to the above models, the FD8136 is moderately less than Sony's SNCDH110 (about $300 online), and possibly half the price of the Axis 3014 (about $480 online). Based on this pricing, for users seeking low-cost megapixel domes in indoor spaces, it may be especially attractive.