In this note, we examine Vivotek's 2010 - 2011 financial results, including a breakdown of Vivotek sales by resolution and by product category.

In the last 2 years, Vivotek's growth has strongly rebounded. While the company's revenue dropped and reached its recent low point in early 2009, since then, the company has grown over 50% per year. During that time, the company has shifted from primarily OEM sales to its own branded business with a fairly broad MP camera product lineup.

In July 2011, Vivotek announced plans for an IPO. While the company has historically been listed on Taiwan's Over the Counter exchange, the IPO will occur on the larger Taiwan Stock Exchange (TWSE). Vivotek confirmed that this is primarily being done to raise the company's profile and that they are not raising additional funding.

As part of the IPO announcement, Vivotek released their sales figures through May 31, 2011. For the first 5 months, revenue was $963 Million NTD or ~$34 Million USD. This puts Vivotek on pace for total 2011 revenue of ~ $80 Million USD. This is far higher than the $30 - $40 Million annual revenue for Vivotek just 2-3 years ago. Their 2011 revenue will likely be close to Mobotix's though Vivotek's total number of cameras sold will be significantly higher (given Vivotek's lower average selling price).

The company's IPO presentation provides a number of important details about the company's performance and growth:

Finally, and perhaps most interesting, Vivotek broke down financial performance by resolution and by product category. Our charts below are based on their raw data.

This is consistent with everything else we have been seeing on the acceleration of IP sales to megapixel cameras.

Lastly, Vivotek disclosed sales by product categories. Vivotek has concentrated the overwhelming majority of their efforts on fixed MP cameras. Sales proportion of fixed cameras has grown from 63% to 79% of revenue in the last 2 years. PTZ sales have dropped dramatically as Vivotek concentrated on launching new fixed MP cameras in the last 18 months. 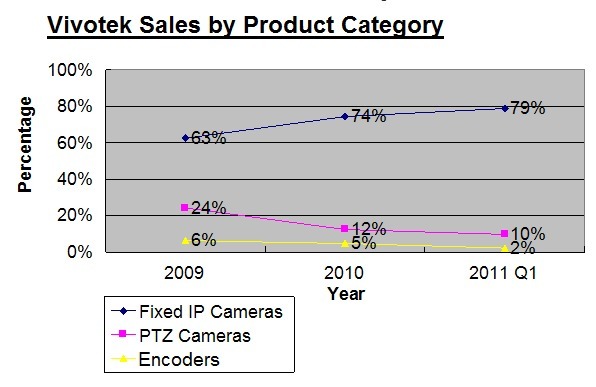