Every access control system requires control panels. But now one manufacturer claims that their 'Freedom' system eliminates the panel, trumpeting that:

That's a pretty amazing claim and, if true, could be the rare access control game changer.

In this note, we examine Viscount Systems 'Freedom', breaking down what's real and not so real.

The core of Viscount's system is a device the company calls a "Bridge" [link no longer available]. Despite claiming the device "turns any card reader into an IP device" without the need of a controller, the "Bridge" is indeed a controller [link no longer available]. All door components like locks, readers, and door contacts are wired into the Bridge, and the board itself is connected into an ethernet network - the very definition of a  hardware controller.

The main difference is that the Bridge makes no logical decisions, but acts as an interface point for access hardware. Bridge boards comes with no case and are available in various circuit board footprints for retrofit applications. The different sizes and shapes of the stock controller permit a 'bolt up' changeover that use existing enclosures, device wiring, and termination blocks. However, in order to install 'default' ~3"X2" VSI Bridges, new mounting enclosures are an additional cost and atypical addition for most platforms. Viscount offers 'mounting kits', but common hinged and lockable cans typically cost ~$20-$30.

VSI claims its access platforms are different than traditional systems because they eliminate 'control panels' and 'virtualize their function' in software. The key aspects Viscount access claims set it aside are:

Edge Architecture: While VSI does not specifically use this term, this indeed describes how a system comes together. The Bridge components are networked together at the door and must remain connected to a main database. Bridges are available in single, double, and four reader variants, and VSI offers interface boards to other systems like intercoms and elevators.  No intermediate or main control panels are used, just a network of interconnected Bridges. 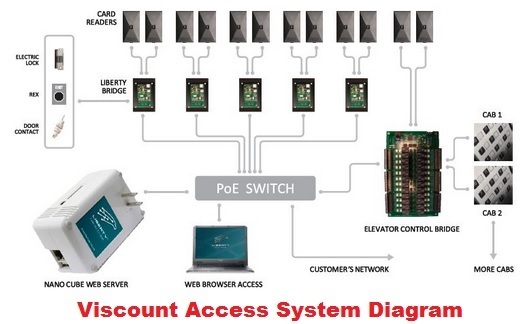 Server Dependent: Unlike many controller products, Bridges must remain connected to a server to be operational. While Bridges can be connected to remote servers in 'the cloud', the company suggests having local failover servers on site. These 'failover' instances are provided as small 'mini-servers' or software clients installed on network workstations and run as background processes. Failover is switched automatically by the Bridge, and several failover servers can be associated with each Bridge.

Wide Number of Card Formats: A relative strength of VSI's platforms is a wide range of interoperability with credential formats that it claims make it 'virtually universal'. The company claims a wide swath of compatible formats including most Wiegand, HID, NXP, Indala, and Smartcard types, up to those using 1024 bits. Even if a credential read is encoded, it simply is passed through the Bridge to a Server and decoded there. In contrast to a HID controller that only works with HID credentials, VSI's Freedom platform has no limitations of useable formats.

Viscount's offerings are competitively priced compared to alternatives, and typically are equal to marginally less expensive. For a standard door, VSI's solution requires:

For street costs totaling ~$550.   VSI's small/medium platforms are carried by national distributors and can be installed without factory training. [link no longer available]

For any option, auxiliary costs like door locks, readers, credentials, and ethernet networking are not included and can result in widely varied 'per door' costs.

While cost is comparative, VSI's platform does not come without notable weaknesses:

Server Dependent: As covered above, the Bridges cannot operate with out an active connection to a Viscount server.

Not Open Architecture: While HID, Mercury Security, or Axis' controllers are 'open', VSI's platform is proprietary. Once VSI hardware is installed, it can only be used with VSI management software. This locks customers into VSI as a provider which is a risk many users actively avoid.

Limited Integration: Pairing access control with video surveillance is one of the most common integrations in physical security, yet lists no integration with any major VMS.

VSI's access platforms have features targeted to government and 'high security' deployments. For example, the platform is FIPS201-2 compliant, works with pre-issued PIV/CAC credentials, and supports 'read in/read out' applications as default. The platform is listed on several GSA schedules, and with availability in national distribution, pricing is competitive.

However, considering the platform is proprietary, integrations are limited, and an unremarkable feature set, many will prefer an open access system that can be used with their choice of major access control software providers.

"Future-Proofing" Access Control Guide on Jul 30, 2015
Its one of the most misused phrases around: "Future-proof". However, even...
Comments (10) : Members only. Login. or Join.