Even 'low voltage' electrical work can be dangerous. Because of that, there are specific rules that apply to those who handle low voltage systems, including video surveillance, to ensure the work is safe, reliable, and is not a risk to innocent bystanders.

In this note, we explain how the National Electric Code impacts video surveillance work.

Due to several ways that the 'low voltage' designation is used throughout the world, the term can define different systems, some not pertaining to typical security equipment at all. For example:

It is the 'US' low voltage designation that these codes cover, pertaining to no more than ~49 volts (although includes PoE that measures up to 57 VDC) for distribution type circuits (i.e., data networks). In the US, 'low voltage' is used to describe most physical security systems, an exempts installers and designers of less that 50 volts from formal electrical licensure.

In the US, the scope of low voltage work is defined in the 'National Electrical Code', also known as NFPA 70. The most recent version of this code was released in 2014, with new versions released every three years.

Surveillance system designs typically fall under Chapter 8 (Article 800) of NFPA70, titled "Communications Circuits and Equipment" [link no longer available] and are defined by the type of space cabling and equipment is installed into: outdoors, plenum spaces, near high-voltage circuits, or special rated areas like firewalls or explosion-proof environments.

In this section, we summarize the most likely citations impacting video surveillance design. However, context of the entire code may be needed for accurate direction. The below high points are given as guidelines, but verification with code enforcement is recommended.

In general, any circuit must be properly grounded to an earth ground or bond, including cable run inside rigid conduit. (800.49) For cable run outside protected building facilities, including cameras hung on outside walls, the connection must be properly grounded after it reenters the facility. Typically the ground point is a copper rod or cable inside of a building and referenced by many electrical systems, but the actual ground or bond method allowed varies based on building types, size, and cable type used.

In general, cabling must be run in ordered bundles, on hooks, or raceways so they do not complicate maintenance. "Access to electrical equipment shall not be denied by an accumulation of communication cables that prevent access to or removal of panels, including suspended ceiling panels." (800.21) This citation, and its corollary passages throughout the NEC, are often cited forbidding the practice of cables over drop ceiling tiles regardless if plenum rated or not.

The proper use of fire rated cable types, especially those run into plenum spaces, are heavily emphasized throughout the chapter. (starting in 800.179) Plenum spaces, typically in ceilings, are part of the ventilation system in a building. Because these areas are oxygen rich and wide open from one room to the next, they can easily allow a fire to spread quickly. As such, any electrical equipment or cable that intrudes into this space much be rated to inhibit the spread of flame and/or smoke.

Data cables must be run at least 4" apart from high voltage sources (800.50) and run inside insulating raceways (800.50(c)). Variations on this specification are made throughout the NEC, being affected by building type, raceway type, and cable type.

Chapter 8 also details cabling on antennas, masts, and poles. Not all AHJs consider these requirements applicable to non-power utility poles, while others consider them applicable to poles of any type, including those supporting surveillance cameras.  The latter interpretation. In any case regardless of pole ownership, they should not be used for utility power support and surveillance camera mounting: "Electric service masts can only be used for the support of power service drop conductors. In addition, cables for radio, TV, CCTV, or CATV cannot be attached to the electric service masts." (810.12, 820.10(c))

While Chapter 8 / Article 800 ("Communication") typically applies to video surveillance, some authorities may view IP based surveillance as computer networks, whose cables used for 'computers for the purpose of exchanging data' and 'must be installed in compliance with Chapter 7 / Article 725 ("Signaling and Power Limited Circuits") of the code. (725-41(a)(4)).

While adoption of NEC prevails in all 50 states and expands internationally, which version is followed can widely vary. The image below reveals the extent of adoption by version, with the 2011 code being most common: 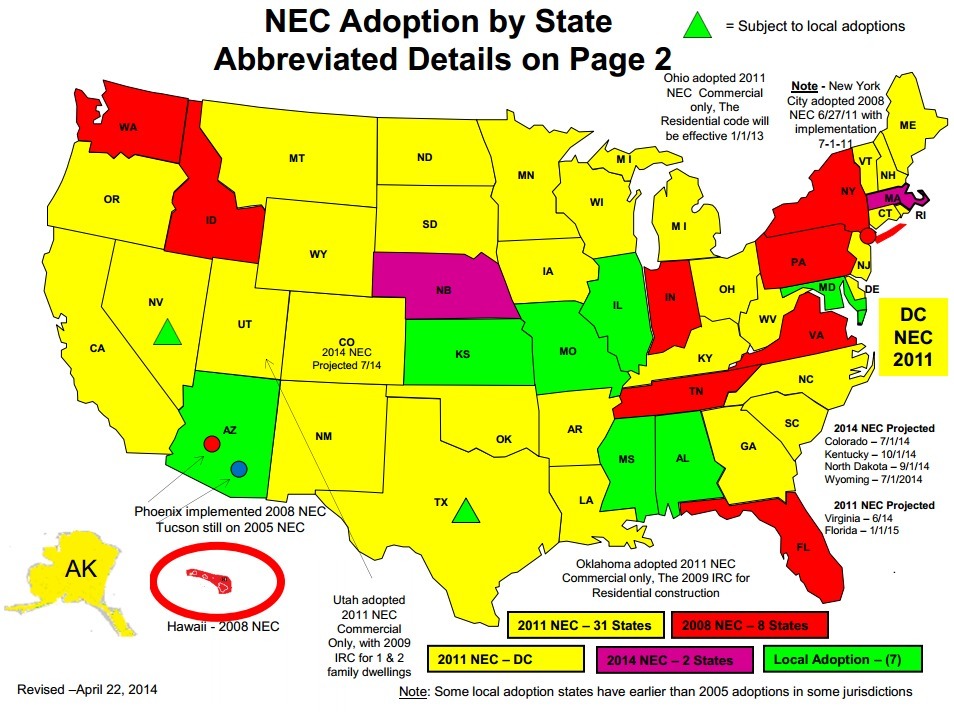 For low voltage work, changes between versions are typically minor, with changes mostly relating to terminology and structure rather than installation differences. The major difficulty lies in being bound to particulars of a citation that does not exist in other versions.  However, to make navigating the differences concise to specific citations an 'Analysis of Changes [link no longer available]' are published that accompany each new code version, relating what changes from the previous.

Note that in many states, "local adoption" prevails, meaning that no statewide acceptance of any version is guaranteed and the particular authority used may change from one area or city to the next.

For this reason, the popular 'check with your local AHJ first' disclaimer must be taken to heart.

Like the variety of building codes that accompany access control, the NEC stands to make surveillance systems (and any low voltage security system) safe for all who may use it or come in contact with it. The rules it details are not always enforced by typically overtaxed field inspectors, but in the interest of public good, every integrator or installer should follow the guidelines.

Building Occupancy Codes and Access Control Tutorial on Aug 30, 2021
A building or room's classification greatly impacts where exit devices should...
Free Online NFPA, IBC, and ADA Codes and Standards 2020 on Sep 03, 2020
Finding applicable codes for security work can be a costly task, with printed...
BICSI For IP Video Surveillance Guide on Feb 11, 2020
Spend enough time around networks and eventually someone will mention BICSI,...
Comments (9) : Subscribers only. Login. or Join.