The old saying "If It Ain't Broke, Don't Fix It" does not apply here. New IPVM statistics show that 60% of cameras that are replaced still work but are upgraded to newer and better technology. 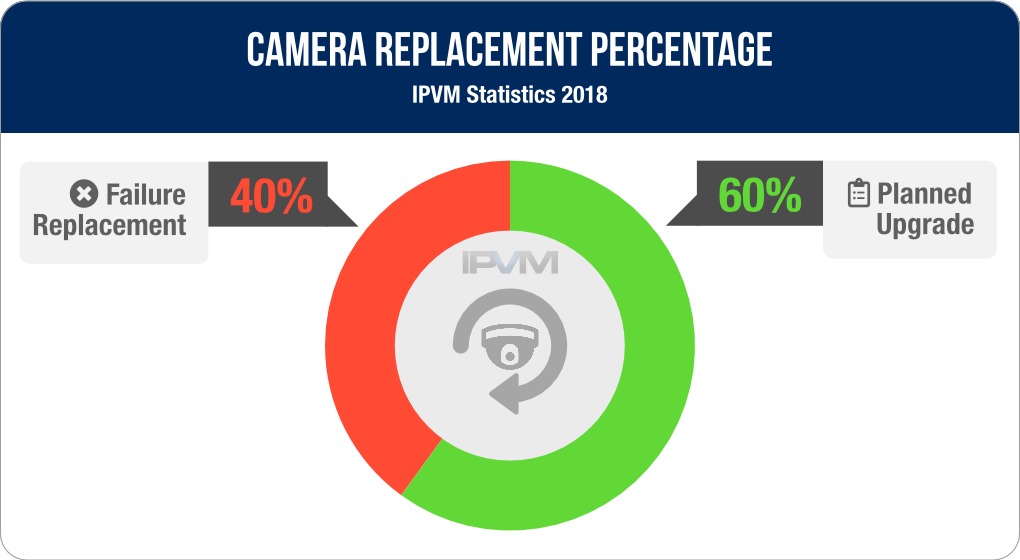 10 years ago there was no great reason to replace an analog camera with a new one unless it was failing.

However, over the past decade, the IP camera market has significantly increased resolution, improve picture quality with WDR, super low light, integrated IR plus Smart Codecs and H265 have reduced storage and server demands. This delivers real benefits from a 2010 1MP / non-IR / non-WDR camera to today's offerings.

Upgrade from Analog to IP

One common theme in the planned upgrade responses indicated the majority of the upgrades were from older analog systems, not necessarily upgrading IP cameras:

Fewer Cameras Are Replaced Because of Failure

40% of integrators responded that they do not upgrade their customer's cameras until they fail to function:

There were a few different reasons for not having planned upgrades, the most common specific reason was customers not wanting to spend the money to replace cameras that are still working:

Failures as a Sales Opportunity

There can be an economy-of-scale advantage to replacing many cameras at once versus over the course of many trips. With the price of cameras as low as it is, as much as half of the cost of replacing a camera is in mobilizing the labor. 2 integrators cited a specific example of using the failure of one or a few cameras as a chance to replace similar model or related installed-life cameras: