That is a startup's bold claim. Not only do they aim to be the first automatic security system against violent crimes, they will accomplish this with a hairclip. That's right, a hairclip.

The company, First Sign Technologies, wants to raise $50,000 for production and has launched an Indiegogo campaign to get there, with a price of $50 per hairclip / anti - violence device.

The Algorithm and False Alarms

The algorithm is still in development yet the company says "false alarms will be rare" and that the technology "know the difference between most common forces in every day life and those during an emergency situation." Further, it suggests that it will be calibrated to distinguish between non-threating and threatening impacts. The company chose a device that could be worn as a hair clip because violent crimes most often involve head impacts. It will also include "Running Mode" that it says will reduce false alarms when a person is running.

How will the algorithm work? An impact that causes head trauma is likely to have much more force than casual contact, says Arthur Emanuele who co-founded the company with his wife Rachel. The algorithm is being designed to detect those impacts. It uses the same hardware as the IceDot bike crash sensor [link no longer available].

"We know that two-thirds of violent crimes have head injuries so we know that a device that detects head injury could be helpful in [them]," he said.

Because they are looking for specific types of impacts and specific force, "[IceDot] has almost no false alarms," he said. First Sign's device will be calibrated for front to back movement like shaking, jarring or whiplash. It can also detect seizures, he said.

The device, which is being marketed mainly toward women, will be designed to be worn in the hair or on clothing. Emanuele wears a prototype on the cuff of his shirt. The device includes the following parts:

The device will support both manual and automatic activation. Automatic activation could free up a person's hands to defend themselves or call someone or even run. Both the device and the smartphone app will have an instant activation button. The user can also turn off the accelerometer and gyroscope and use it only as a panic button.

From an infographic released by First Sign Technologies showing the process: 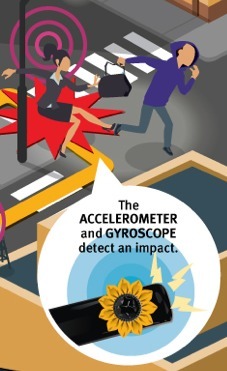 Upon activation, the user has 15 seconds to abort an alert with using a tethered smartphone. After 15 seconds, an alert is pushed to the user's emergency contacts and the person's phone will start logging GPS data and will activate the phone's camera and microphone.

With a $5 monthly subscription, the app will also send this information to a monitoring center where operators will review the information coming in from the phone and relay the GPS information, nearest 911 or first responder relative to the alert and the amount of impact that triggered the activation (high, medium, low).

The device will require pairing with a smartphone similar to the way you would pair Bluetooth headset. The app will be used to upload emergency contact information, to monitor battery life and as a panic button.

In the last three years there have been numerous similar apps to come out (Panic Button, Guardly [link no longer available], SafetyGrid). All of them claim ease of use and look to reduce the number of buttons a person has to press in an emergency, but First Sign's hair clip is the first we've seen that claims to be able to alert automatically. It will be interesting to see the feedback from early adopters on how it handles false alarms.

The New Generation of Crowdfunded Security Startups on Sep 02, 2014
New entrants to the security market are few and far between. However, there...
Comments (3) : Subscribers only. Login. or Join.