Passive InfraRed (PIR) motion detectors are critical in many security systems, yet they are often considered ugly or intrusive. 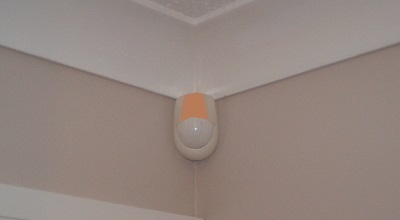 Despite being indispensable, and even required by code in certain applications, they are difficult to hide and frequently look like plastic bricks. However, Visonic has a line of low-profile discrete sensors in the Spy series of PIRs. In this note, we examine these sensors, discuss applications and pricing.

PIR Motion Sensors are used in several types security systems; from intrusion alarms, to Electronic Access Control, and even video surveillance. Despite different applications, traditional sensors are big, unsightly, and designed for 'general purpose use.' Even specialty sensors (like RTE PIRs) are designed to be hung on the door frame in the same way, regardless of the impact to appearance of vulnerability of the sensor to tampering. Considering that 'traditional PIRs' are a common source of 'false alarms' and can even be misused by outsiders to unlock doors, choosing the right PIR for the job makes sense.

The most distinctive difference with SPY PIRs compared to other types is the smaller size and mount. Most PIR sensors are large and mount flush with walls or door frames. Visonic's line is recessed into the mounting surface, with the majority of the sensor fitting inside the hole (2 3/4" deep), and measure ~3/4" in diameter.

This is a security benefit in reducing tamper risk, but also an aesthetic requirements that most sensors fail at meeting. Rather than white or beige colored boxes hanging on a wall, the SPY is discrete and less obtrusive.

The line includes four separate types of sensors, each designed to detect movement in a different pattern or range:

The manufacturer offers application suggestions based on the detection range and on the typical detection requirements of movement:

However, while the different SPY models are useful in a range of situations, detection regions are not adjustable or maskable - a feature seen in several 'high end' PIRs.

Not Pet Immune - Commercial/Industrial Only

Another potential dealbreaker is that SPY series offers no 'pet immunity', that is ignoring moving objects with a small mass. This is useful in residential applications where pets may roam hallways/rooms at night when the alarm system is armed. Omitting this feature limits the SPY series to commercial or industrial types of systems

The Visonic SPY series ranges between $40 - $50 online, depending on the particular unit. This is more expensive than many 'Pet Immune' intrusion alarm style PIRs (ie: ~$20), but are less expensive or roughly equal to specialty sensors like RTE or curtain types.

When false alarms are a problem, many suggest using costly 'dual technology' PIRs that require more than one (integrated) unit sensor to detect motion before tripping. 'Dual Tech' sensors can cost $75 up to $250, and the mount flexibility/ tighter sensing range of a SPY PIR may ultimately result in similar accuracy with a lower cost solution than a dual technology PIR.

The benefit of using smaller, recessed sensors is obvious in many situations. Take the example below, where motion up the stairs needs to be detected, but motion outside of the stairwell is not an alarm condition: 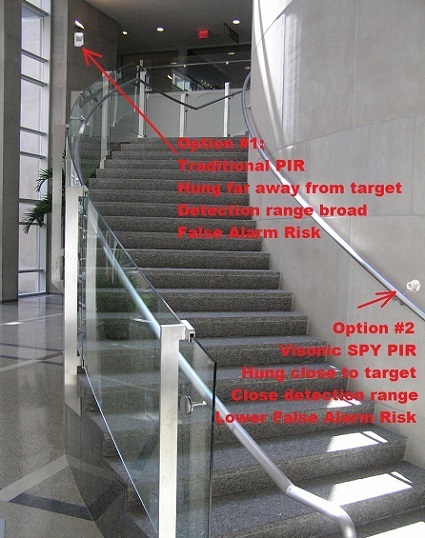 Rather than hanging a traditional PIR on the most convenient wall, which is considerable distance from the foot of the staircase, a SPY can be hung adjacent to the rail and shoot a tight curtain only the width of the staircase. Rather than detecting motion over many square feet, the detection area is tight and only just a few feet surrounding stair access.

Because the SPY series is small and recessed, sensors can readily be inserted into walls and doorframes, even at heights that would be risky for 'traditional' larger and flush mounted units. The physical orientation and positioning of the sensor is key to accuracy, and while traditional sensors are limited in where they can be placed, SPY allows for placing PIRs into more useful positions.

Just as camera position plays a key role in surveillance effectiveness, sensor position for PIRs is key for prime detection. If the 'false alarm' risk can be cut by simply sticking the right detection sensor in an ideal location, using SPY could improve performance, Intrusion, CCTV, or EAC system alike.