Using your heartbeat to open doors just got a step closer to reality. Startup Bionym is raising funds and interest for a biometric bracelet it coined 'Nymi' that uses your individual beat signature to activate your identity. Where can the product be used, and is it ready for the 'big leagues'? In this note we take a look.

Essentially, Nymi is a credential that is only activated by detecting the user's specific heartbeat, and can be applied anywhere confirming user ID is important- logical or physical access control alike. The device, worn on the wrist like a watch, contains a number of features:

Catch the developer's promo video below:

Nymi is being presold in three colors [link no longer available]: Black, White, or Orange for ~$90. After projected release in 2014, the price bumps to ~$100.

The video touches on the prospect for access control applications, showing a concept where Nymi's BLE chip links up with an EAC system to open doors: 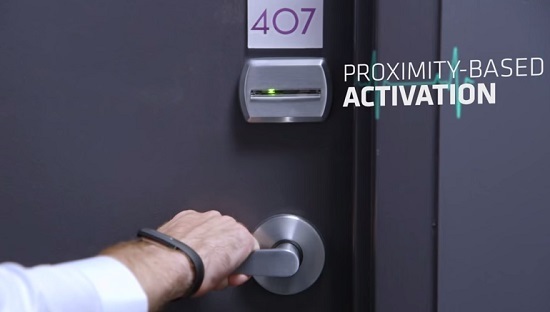 Using BLE in this application is not unique, as several other access product (ie: Lockitron, Kevo) use it in the same way.

At current, Bionym's presell of Nymi aims to generate buzz and interest in the device's potential. The startup wants to put Nymi in the hands of those in the developer community that will write integrations for payment systems, consumer electronics, Access Control locks, and even 'Smart Houses'.

However, at current, the company offers no production implementations, only concepts.

One of the biggest physical shortcomings of Nymi's design is that it lacks a watch. ...or any other utility aside from being a credential. People's wrists are not exactly 'cheap real estate', and to ask someone to wear a bracelet that only provides one function is a big demand.

Indeed, even products like Nike Fuel Band, used to quantify activity and health, also provides a time piece. Even if vast applications using Nymi are developed, unless the bracelet adds additional features, it may be a hard sell to replace 'traditional' credentials that double as photo IDs or are carried on multifunction devices like smartphones.

Nymi draws natural comparisons to the range of biometric credentials/readers already employed in access, but with several sharp differences: