Last year, SpotterRF drew attention releasing a low cost, ground-based radar unit for intrusion detection. This year, the company is ramping up their portfolio and introducing a unit with wider coverage range, and a new integration server to simplify IP camera integrators. What specific advantages do these new models bring to the table, and how much do they cost? We cover the details inside.

As an intrusion detection technology, ground based radar offers several advantages over 'traditional' sensors like long range Photoelectric, thermal cameras, or PIR technology. Instead of detecting movement in a thin beam, ground-based radar typically covers a vast area. For example, unlike many thermal cameras that cover 200 meters within a narrow FoV, SpotterRF claims radar covering between 20 - 140 acres. While sharp thermal changes wreak havoc on PIR sensors, rain, snow, or fog do not create false alarms with radar.

However, even 'low cost' units cost tens of thousands of dollars, and range is limited by structures and terrain, and blindspots due to topography means that radars are best for covering vast, open spaces; not urban, densely populated cities. Also, relying on a single unit to cover so much area leads to big gaps in detection should a unit fail. We examine SpotterRf's new offerings, and detail appropriate uses in the sections that follow.

SpotterRF is introducing the C550, essentially a unit with longer/wider range, to their offerings. The C550 does not improve detection thresholds or enhance performance of previous units, but increases the detection coverage area to approximately 850 meters x 750 meters, or roughly 140 acres. 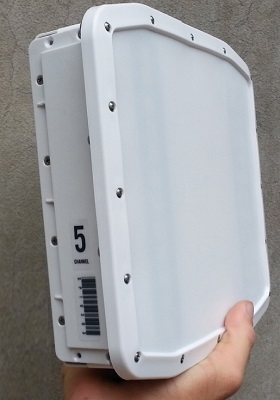 Other performance factors include:

The company is also releasing a series of web-configurable input/output modules it calls the "NetworkIO Server" providing a direct integration between PTZ cameras and radars. SpotterRF claims PTZ and radar integration is a common pairing, where the radar senses movement and cues the PTZ to that spot. The video below demonstrates this integration,which SpotterRF deems 'Slew to Cue':

The overall usefulness of this integration depends on the zoom power, camera resolution, and light conditions surrounding the 'target' zones.

While SpotterRF is releasing a range of 'integration servers' for different systems, the 'Hub4' module (the IP camera unit) features: 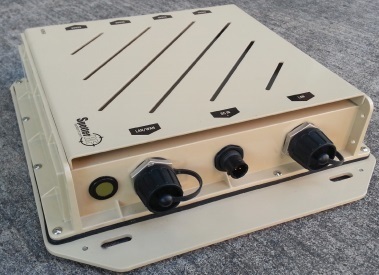 Radar Support: Up to three SpotterRF radars are supported by the module, covering 360 degrees surrounding the camera.

PelcoD Protocol Support: The module directly interfaces with PTZs via PelcoD, and video is outputted for (to VMS) storage from the camera. When the radar detects movement, the module sends movement and zoom details to the camera, automatically positioning the camera for best view.

Milestone VMS Direct Intgration: If a PTZ is not PelcoD compliant, a direct integration with Milestone XProtect means the VMS can alternatively be used to drive cameras to alarm points. Instead of directly being connected to the camera, the module ties the radars directly into the VMS server. While the server's map interface is recreated inside Milestone, radar alarm zones still need to be defined within the Hub4 interface. The configuration screen is shown below: 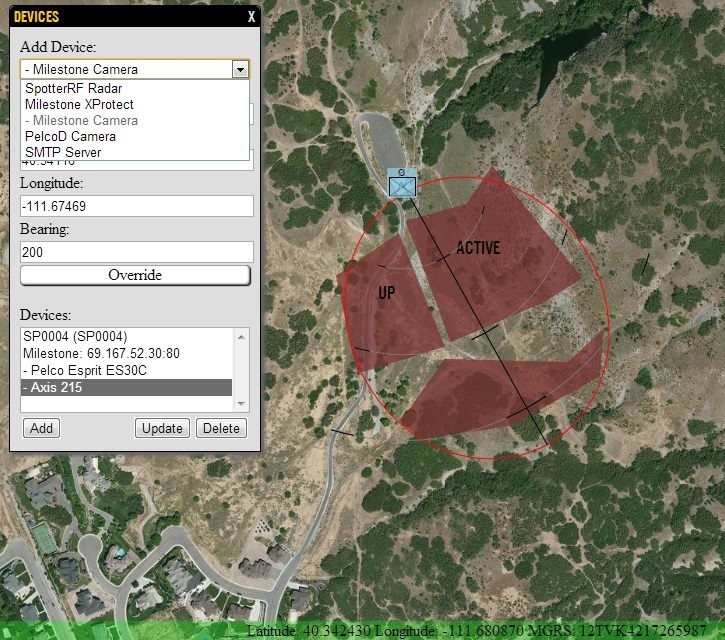 Cost: The Hub4 base costs ~$3000, with individual radar sensors and cameras adding to total hardware costs. The Hub4 also requires a software license for each connected device, which the company prices 'roughly inline with VMS license fees' depending on volume discounts.

SpotterRF's C550 is not for 'typical' intrusion detection problems. While it's 140 acre range covers about 87 city blocks, the area it monitors it best suited for empty, undeveloped terrain outdoors. The C550 is not suitable for indoor applications.

Because site improvements like buildings and even thick foliage can cut the reflectivity of targets to nil, and the unit can only independently track 20 simultaneous targets, it works best for relatively desolate, clear cut locations where a single/small group of intruders is alarming - industrial facilities, farm land, mining sites, and border fencelines. Topography plays a huge role in unit effectiveness as well, and the C550's range may be significantly reduced depending on the location of nearby rock formations, forests, valleys, and ridgelines.

The unit's ~$30,000 pricetag likely will limit it to institutional and larger commercial end users. However it may actually prove less expensive in covering vast areas than the equivalent systems designed with hundreds of 'traditional' sensors.