"Innovative" is normally not a superlative associated with budget-line manufacturer Speco Technologies. However, Speco has recently announced the Model 02S1 [link no longer available], a camera designed for intercom applications. In this note, we examine what makes this camera unique and see how it stacks up against comparative offerings.

While Speco does not limit application to only 'intercom function', the O2S1 is built in a unique form factor; it is neither box, cube, nor dome. It features a gang box camera enclosure, with a powered non-directional mic and amplified speaker flush with the front of the case. The camera is designed with a wide angle view and a pan/tilt mechanism. 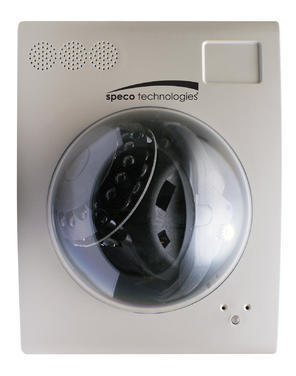 The O2S1 includes an onboard webserver that displays live video and provides control of the onboard mic and speaker. The image below depicts the basic viewer layout, showing the PT controls, the audio toggle features, and the I/O buttons for triggering door locks or strikes: 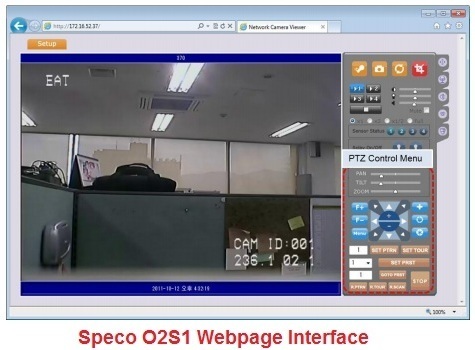 Analog Output: The IP based O2S1 supports use of PVM displays or even DVR recording through an analog composite output. However, the resolution of the NTSC output is reduced to D1. This feature is useful when hung at entryways and other security checkpoints to affirm that video surveillance is in use, or when transporting video to be displayed on monitors without the requirement for additional computer workstations.

Day/Night function: Unlike common analog video door stations, the camera accommodates 'low light' situations, with rated sensitivity to 0.2 lux before cutting over to B/W IR enabled night mode. While main entrances are not typically dark areas, the camera can be located at back doors or at remote locations where ambient lighting may not be sufficient for non-day/night units.

Not Watertight: Given that many intercom applications are exterior mounted, the fact that O2S1 is not rated for outdoor use significantly limits its value. In general, outdoor video intercom stations are IP65/66 rated, and may feature potted components. The O2S1 is modestly rated for 32F - 113F temperatures and the manufacturer makes no claims of water resistance. This deficiency limits deployment to very moderate/protected outdoor use and interior use only.

No Integrated Call Button: Another shortcoming is that the camera features no integrated button to announce visitor presence. While this component is a critical feature of an intercom, the O2S1 completely omits it. Despite this inconvenience it does provide the installer/designer flexibility on where to mount the unit, and the camera can potentially be mounted higher than standard intercom units to prevent vandalism or tampering. The O2S1 does include an I/O port so that an external call button can be manually wired to the unit, but this will be an additional expense.

Not ONVIF Compliant: The lack of ONVIF compliance and nonexistent 3rd party VMS support significantly limit using the camera in mainstream surveillance systems. Recording video from the O2S1 is supported through onboard SD card storage or by Speco's NVR software, and the camera does support RTSP streaming. However, given the rudimentary nature of those options, the O2S1 is not a good surveillance choice. For additional expense and reduced resolution, the unit can be connected with an encoder, but this approach does not guarantee onboard mic/speaker/PT control.

Narrow "Wide Angle": Given that 'wide angle' is an arbitrary definition, 4.3 mm is rather narrow compared to other 'wide angle' lens solutions. It is not uncommon to find sub 2.0 mm lensing in other wide angle products. The O2S1 accounts for this by featuring a mechanical pan-tilt mechanism, but positioning the camera to view the intercom subject is a manual operation that other solutions, like the T24, do not require.

The O2S1 strikes immediate comparisons to the Mobotix T24, which despite having a better pedigree also possesses many of the same drawbacks. The T24 features higher resolutions in a wider angle FoV format, has integrated call buttons, and a proprietary compression that limits 3rd party VMS support. The O2S1 features better low light performance, more flexible mounting options, and is lower priced: $998 USD for the Mobotix T24 vs. $670 USD for the Speco O2S1. However, the Speco lacks the 3rd party VMS support similar to the Mobotix, and as a result both models have limited use for surveillance.