Mesh wireless has a dubious reputation, with many stories of system failures and finger pointing between manufacturers, integrators and end users.

A Califonia city is actively looking for a new municipal surveillance system and is requesting a mesh network. In this article, we talked to the city police and examined the RFPs for the new setup to analyze its potential pros and cons.

The 23-page RFP says the mesh system must have capability to support 40 vehicle-mounted mobile wireless units and 16 IP cameras. The network will operate on the 4.9 GHz public safety band, but police say it will have both a police-only band for cameras owned by the city and a public band for local businesses to give law enforcement access to their cameras. The police department is also asking for training on usage, operating and maintaining the network to be included, possibly to help cut down on future maintenance costs by doing more work in-house.

Huntington Park won’t be using its existing surveillance cameras on the mesh network, however. “We have cameras in the city in our business district that were installed some time ago, but the cameras are old, the technology is old and some of the cameras have been failing,” says Administrative Lieutenant Neal Mongan, the point of contact for the projects. The old cameras have been in place for roughly six years [link no longer available], according to past city council minutes.

Huntington Park wants to replace them with 12 IP cameras that can be moved throughout the city to cover crime hotspots, according to a second RFP released last month. This considerably shorter, 5-page RFP says cameras must be compatible with the mesh network but the RFP does not include any camera specs other than ONVIF compliant models are preferred (Note the detail we found in this RFP for a similar, but much bigger project in Nashville).

Huntington is looking to move fast on this project. The RFP for cameras was released February 28, the deadline for proposals was the 21st and the city hopes to award a contract by April 1. The mesh network has to be complete within a year of the contract award, according to the RFP. Messages left for city council and the Huntington Police asking about the budget of the project weren't immediately returned.

A map attached to the RFPs  shows 16 proposed camera locations covering about 10 blocks of downtown Huntington Park. The area is a flat expanse of one-story retail buildings and long sight lines. The camera locations include nine intersections, six parking lots, a city park. And Mongan says the city will consider expanding the system as funds become available. 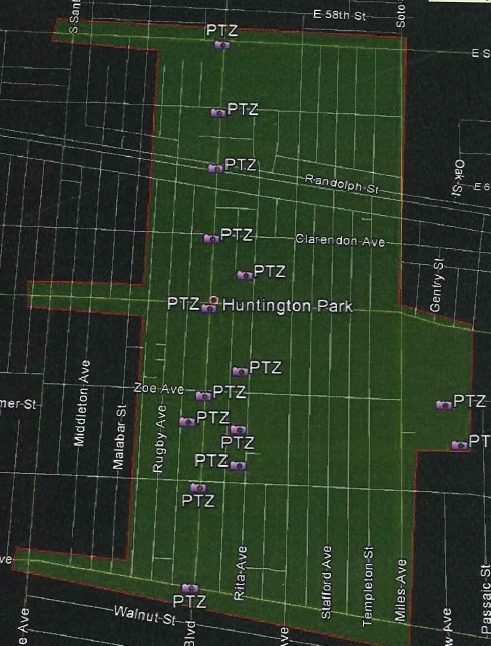 Huntington Park Police declined disclosing further details about the old system, including what type of cameras and VMS it uses, what problems it was that prompted the RFPs, and whether it hired a consultant for the RFP, saying some of the information was law enforcement sensitive, however most of this information should be available using a open records request.

Cities tend to run into trouble doing mesh over large areas, but this is actually an ideal application of mesh (minimal obstacles and minimal distance). Downtown Huntington Park is a small distance, around 10 blocks, and relatively flat. Most of the buildings in the area are only one story.

The downside to these RFPs is how they spec cameras. In its RFPs, Huntington is very vague about it wants. They say PTZ (on the map) and ONVIF compliant, but nothing beyond that. This could lead to issues in the future when adding cameras they are never specific about what they’re willing to accept. Additionally there are no specs on what cameras businesses should be using if they want to be part of the public network.