We visited Theodore Baran, the security director at Gallaudet University, a private school for deaf and hard of hearing students in the heart of the District of Columbia about public safety and security in this unique population.

Gallaudet has around 2,000 students enrolled. Its undergraduate students make up half the campus and are mostly deaf. There is a small portion of the student body that is deaf and blind. Gallaudet’s graduate students are a mix of hearing and deaf/hard of hearing students.

Video surveillance systems don't capture audio, but one of the most unique things about surveillance in a deaf population is that you don’t need audio to capture ongoing conversations.

That most people on campus are using American Sign Language to communicate, “is an advantage we have,” said Baran who noted that conversations have been used to vet or support how someone has described an incident.

“If someone is standing there talking about if they have marijuana then we can see that. I don’t think some people realize that.”

The campus has around 160 cameras and uses a mix of fixed and PTZs -- about 50 percent of each, the director says. All feeds go to a central command center in the campus public safety office where they are watched by one or two operators. By default monitors are set to watch Gallaudet’s highest traffic areas. No video analytics are in use.

Many of the school's 40 buildings have fixed cameras at the doorways: 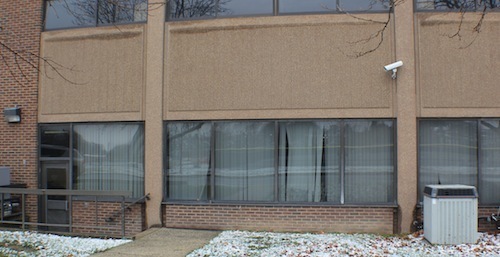 While the PTZs are mounted on the sides and tops of buildings overlooking campus and pedestrian thoroughfares. The camera below is mounted on Carlin Hall [link no longer available] and eight-story dorm. The public safety office is in the first floor of this building. 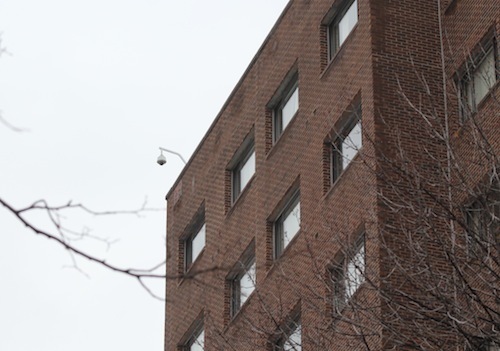 “It’s an open campus so we have people coming in cars or bikes and pedestrians,” Baran said.

The cameras are primarily used for investigative purposes -- someone loses something, vandalism occurs or someone reports a crime. The office gets requests to pull footage a couple times per week, the director said. When I first arrived on campus, Baran was wrapping up an investigation from the day before. A blind student walked into the side of a delivery truck that was parked in a crosswalk. The public safety office pulled the footage to see exactly what happened.

"It happened exactly as the student said it did," he said.

The public safety office watches cameras live during special events. All of the gates on the campus have fixed cameras to capture images of any vehicles going on or off the campus.

Camera deployments since in Baran's time at Galludet have earned their value after the number of vandalism incidents and burglaries inside the dorms dropped dramatically after cameras were installed and the additional evidence they have provided.

Oaxaca, Mexico recently made news for it's corps of deaf surveillance operators [link no longer available] who monitoring the city's 200 surveillance cameras. The city's public safety department said in the year they have relied on deaf operators they have found that deaf operators are more effective than hearing operators at noticing movements, reading lips and body language and avoiding distractions. We asked Gallaudet's public safety director about the claims.

Baran says the school had deaf operators in the past, and one in particular he heard was "pretty amazing at his job" but the school does not have any currently or since he's been there. The operators, who also serve as dispatchers, go through the equivalent of a year of ASL training in addition to traditional security operations training. Additionally there are volunteers who will help translate conversations recorded by surveillance cameras.

The biggest challenge for Gallaudet’s public safety office is making sure campus security D.C. police can communicate with its population. The university often calls on the city police to assist in investigating crimes on campus and the language barrier in the past been an issue.

“Often both the suspect and the complainant are deaf. We just want to make sure that we are fairly recording the statements of both and doing everything fairly,” he said.

The public safety office only has “a handful” of deaf officers, many of them from Gallaudet and D.C.’s Metropolitan Police Department Deaf and Hard of Hearing Liaison Unit has 10 officers assigned to the Fifth District of D.C. where Gallaudet is located. This is the most of any district. Two of them are assigned as Gallaudet liaisons.

On a campus where a majority of the population wouldn’t hear a message broadcasted over and emergency alert system, flashing lights are more effective. The 99-acre campus has more than 100 emergency beacons using high-intensity LEDs. The beacons can also display a message. Below is a PTZ on the school's auditorium and an emergency beacon. 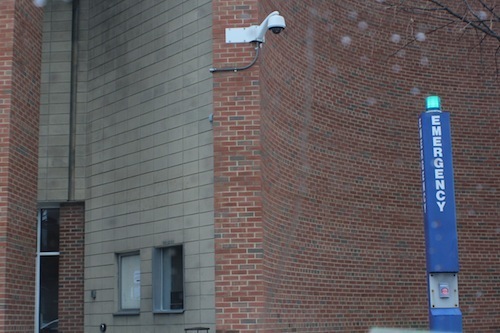 The campus which sits in D.C.’s Trinidad neighborhood is completely fenced in with five gates that stay open during business hours. The wrought iron fence below outlines the campus perimeter. You can see a map of the whole campus here. 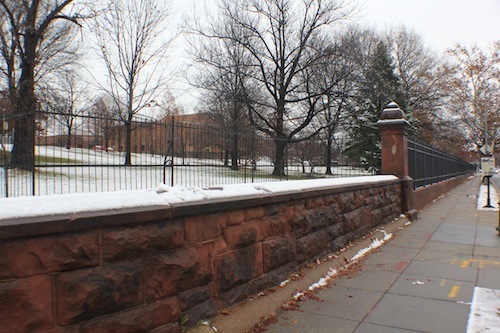 After hours, all but the front gate of the campus are closed making there one entrance an exit to the campus. The campus uses RFID cards for access control and keeps entry and exit logs. The guard shack at the front gate is manned at all times. The guard has radio contact with the public safety office and the ability to send out alerts or notifications, but does not have access to camera views. 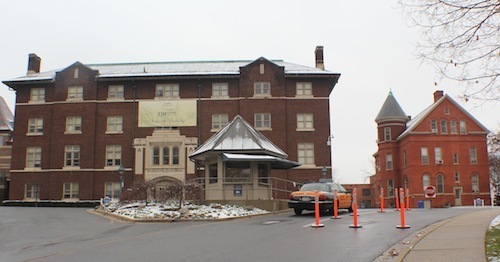