Secured Cities - Should You Go?

Cities are huge users of surveillance, with controversial systems of hundreds and thousands of cameras commonplace. One U.S. show, Secured Cities, is attempting to specialize in city surveillance. We bought a ticket and headed over to the two-day event in Baltimore.

The show is a mixture of sessions, exhibits and optional tours. Unlike typical shows, the exhibit floor was secondary at this event. While it had a number of large vendors [link no longer available], they were small tabletop setups. The core of the show was the sessions [link no longer available] where attendees could pick from a number of choices each hour. We found some to be excellent and others terrible. A number were end user or consultant lead, offering highly informative seminars. Unfortunately, nearly an equal number where thinly veiled vendor marketing pitches (like one might listen to at an ADI demo day). For example, the Baltimore PSIM session started out promising with an introduction by the Baltimore PD, but turned into an informercial for Vidsys within minutes. A separate session linking bad posture to 9/11 was just bizarre.

The most unique and interesting aspect was the optional tour. We attended a tour of the Baltimore command center. And while the police department made some questionable claims, it was very insightful to see a working tour of a large scale operation.

Who Goes to Secured Cities?

The show reported around 480 attendees and 70 vendors.

The attendees at Secured Cities were law enforcement looking for answers to specific questions about projects they were currently working on or had recently completed. Mid-sized cities and towns were fairly well represented, despite the show's focus on bigger city solutions. An officer from Nevada was looking for access control solutions for small departments. A department from the midwest was looking for ideas to network covert light pole cameras. One police officer was looking for last minute ideas for an RFP he has to complete by this Friday.

An example of the type of presentations at Secured Cities: At one of the most well attended sessions, the city of Cleveland explained that it opted for mesh networking because it wanted something less expensive that it could easily expand. The city says it would prefer to use fiber, but it wasn't in the budget. Instead of doing one massive project, the city explained that it puts up half a dozen or so cameras at a time as funds become available.

The most informative presentations at Secured Cities dealt more with tactics than technology. Virginia Tech gave an overview of how it has changed emergency notification procedures after several high profile incidents including the 2007 massacre that killed 32 people and how those procedures came into play during a shooting in 2011. Strategos International presented on what to do when a lock down fails, a crash course in securing a building on the fly and how to fight back in an active shooter situation.

The City of Philadelphia said it recommended against them while one session later, the Baltimore Police Department praised them as the best thing to happen to the city’s situational awareness. Philadelphia explained that its Office of Innovation and Technology is building its own, saying they haven’t found an out of the box PSIM that gives them all the functionality they require. Baltimore doted on its Vidsys PSIM in what amounted to a promotional presentation for the company. A tour of Baltimore’s Citiwatch command center showed it in action.

“PSIMS may not have been ready for prime time a few years ago, but now we’re really starting to see some promising things coming out,” said a procurement officer from a California police department. He said is department was too small to need a PSIM but he will keep an eye on how other smaller agencies use them over the next few years.

One of the more interesting reasons cities said they liked PSIMs was because they helped manage incoming requests for video, mainly from the press and the public. In separate presentations both the Massachusetts Department of Transportation and the City of Cleveland cited managing press requests as a feature they like about their PSIMs. The director of security and emergency management at MassDOT said 70 percent of video requests overall have nothing to do with security and are for things that have to with worker’s comp claims, press requests, and reviewing non-security events.

Another value of Secured Cities is the opportunity to get little-known facts that aren’t routinely released to the public. The Massachusetts Department of Transportation has a policy not to disclose the number of cameras it has, and usually keeps that number under wraps. At a presentation on its security upgrades, the director of security and emergency management said the number of cameras would reach 10,000 next year. Those cameras are a mix of fixed, mobile, PTZ and what he called “high megapixel” cameras. He named Arecont, Sony and Axis as three brands they were using and said MBTA has at least five different VMSs (Geutebruck, Genetec, Nice, Avigilon) tied into it’s PSIM. Also tied into its PSIM is social media, tunnel lasers, chemical sensors and security gates. Watching over these cameras is a control room of 18 operators, including a dispatcher and five other hubs at different locations with two operators each. I didn’t catch the exact number of screens the room has so far, but it will have 84 by January.

Two IPVideo Corporation employees were in the back of the company's surveillance van when a person tried to take the keys and drive it from out front of the Baltimore Convention Center on Friday. They stopped the man before he was able to start it and detained him until police arrived a few minutes later. The Mercedes BluTech is fitted with 13 cameras inside and outside. It's typically rented to clients, like the NFL, for extra security at events. From what I hear, the cameras on the van caught some of the attempted theft on video. Here's a photo of the scene as the police arrived. 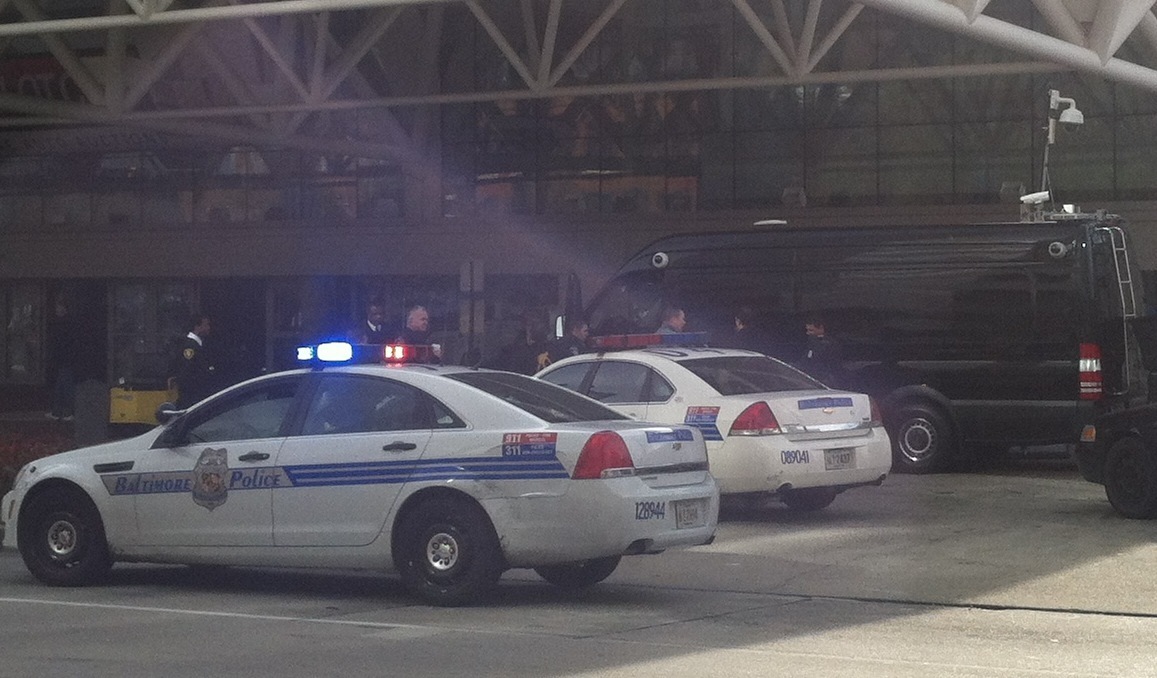 For those looking for city surveillance specifically, this is the only show we know that focuses just on that. Plus, it does bring together a non trivial number of experts and real end users. Like any show, one has to wade through marketing junk but it does have offer significant potential for city users.