The Cheapest School District Ever?

Many complain about local governments picking cheap surveillance solutions. Well, it does not get any cheaper than this. Used iPhones, iPods and iPads watch over the halls and entry points of Arizona's Miami School District. The devices have been in place for three weeks, and there are plans to expand the network, and the school has not spent a dime on them. We talked to the superintendent about how they decided that iPhones were more cost effective than traditional surveillance.

Earlier this year, when the administration started talking about how it would add surveillance to its five schools, it was a little bit overwhelming, says Superintendent Sherry Dorathy. “We had no money to invest in a system like that ... One of our principals found out about the Presence [link no longer available] iOS app and he contacted Mr. Moss [the CTO of People Power, the company that created Presence] and he contacted me.” People Power provided the school with a free subscription to the app.

An iPad at the front door is used to watch people coming in an out of one school. Another iPad watches a cafeteria. In this screenshot from a CBS 5 broadcast, an old iPod monitors the hallways: 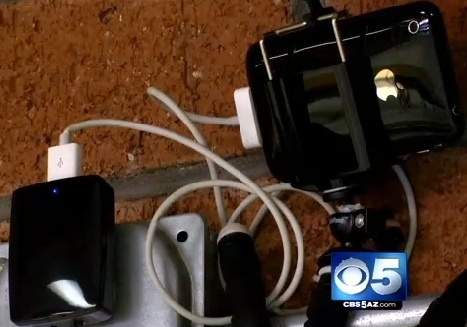 The Presence Pro iOS app was created and funded by the company People Power, using IndieGogo. CBS reported that Miami is the first district in the nation to use the solution:

A closer look at the control interface: 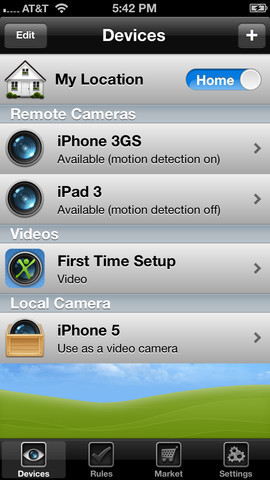 The district has no plans to purchase used iOS devices for the system. Instead, they are asking the public to donate old ones. The system started with five devices and will expand as they are received.

“Once we got approved by the board to do so, we started advertising: We have it on our website and out in the public and our community that if someone has an iPad, iPod or iPhone to donate, they should. This project is dependent on people donating them,” said Dorathy. With the recent announcement of two new iPhones, Dorathy hopes people will think of the school when deciding to upgrade.

Such a system is a better fit for home monitoring rather multiple sites across a school district.

"Your old phones have much more capability in them than even some of the best security cameras [link no longer available] and WiFi cameras on the market," Moss told the local TV station in a recent broadcast. However, here are some limitations that immediately stand out:

Once the lights go off, you lose your view. Apple devices are not comparable to surveillance cameras when it comes to low light imaging. They are unlikely to be able to capture usable images for anything that happens at night or when the lights in the building are turned off.

The field of view for these devices is fixed with no ability to adjust it for the scene. The same field of view in the cafeteria is going to be the same one they have for the hallways or classrooms.

Cameras in Apple devices automatically adjust the lighting for whatever section of a scene the camera is focused on, which should not change if the camera is stationary, but could prove unhelpful when light varies dramatically over or underexposing other parts of the image. For example, at the high school, there is an iPad mounted to watch people who come in and out the front door of the building. The person is likely to be in focus while the lit parking lot behind them is overexposed.

A Presence Pro subscription only comes with 2GB of cloud storage for storing motion alerts. The school district says it downloads video daily and "store it for as long as we want." At this time there are no defined storage limits. That may not be an issue now, with only five devices, but will be an issue as the network expands to many more devices at four additional schools.

"Our IT department is monitoring the system for a while to see what usage is taken up by the devices ... At this time we are not concerned about the bandwidth being used. For districts with a small bandwidth this may be an issue, but we are good," Dorathy said.

However, scaling up potentially dozens of cameras over wireless networks could easily saturate them.

Devices must be plugged in to provide constant power as smartphone camera eat up battery power quickly. This solution may not be ideal for all schools because most places probably do not have power outlets at the top of their walls. In the case of this district, the cameras were mounted in locations that formerly held TVs, allowing them to use existing power outlets.

The cameras switch from live-viewing/recording to motion detection after hours. One of Presence Pro’s claims is reduced false alerts and sensitivity control for motion detection, but it is unclear how the feature works.

The school says it is aware of the novelty of Apple devices and has them mounted high enough that students cannot reach them to tamper with or steal. Others are places behind glass. "A six foot person would still have to climb on a ladder to access the devices," Dorathy says.

The school district says it is happy with the results so far,and the feedback from the community has been positive. "We are reaching 'outside of the box' so to speak to answer a problem in an innovative way while being very conscientious of the tax payers dollars." Miami school district would like to eventually expand the network to its buses.

The school wanted surveillance for cheap, and they got it. They are building a network for almost nothing but the value may not be much more than that.