Installers typically hate using laptops to install IP cameras, and most everyone agrees: when on ladders, laptops are awkward and cumbersome to use. However alternatives are scarce, especially ones that support third party cameras. Filling this gap is a 'new' IP camera installation tool. In this note, we examine how they are claiming to meet the need and compare it to other options.

One of the most commonly sited complaints when installing IP cameras is the difficulty of focusing a camera while simultaneously balancing a laptop on a ladder. In our "IP Camera Installation Tool Preferences" report, almost 70% of responses suggested they use laptops while installing cameras, but the detailed responses almost universally suggest they do so out of necessity and wish they had a smaller, handheld option.

Addressing this need, Razberi has released the IT-5000 [link no longer available] "Open Network Camera Installation Tool". Its most significant claim is support for multiple mainstream camera vendors, including Axis, Vivotek, Arecont, Panasonic, Sony, and several others. Additionally, the tool is ONVIF compliant, so the IT-5000 can be used with a significant number of production IP cameras (presuming the ONVIF connection works which is certainly not guaranteed).

Below is a picture of the Razberi unit: 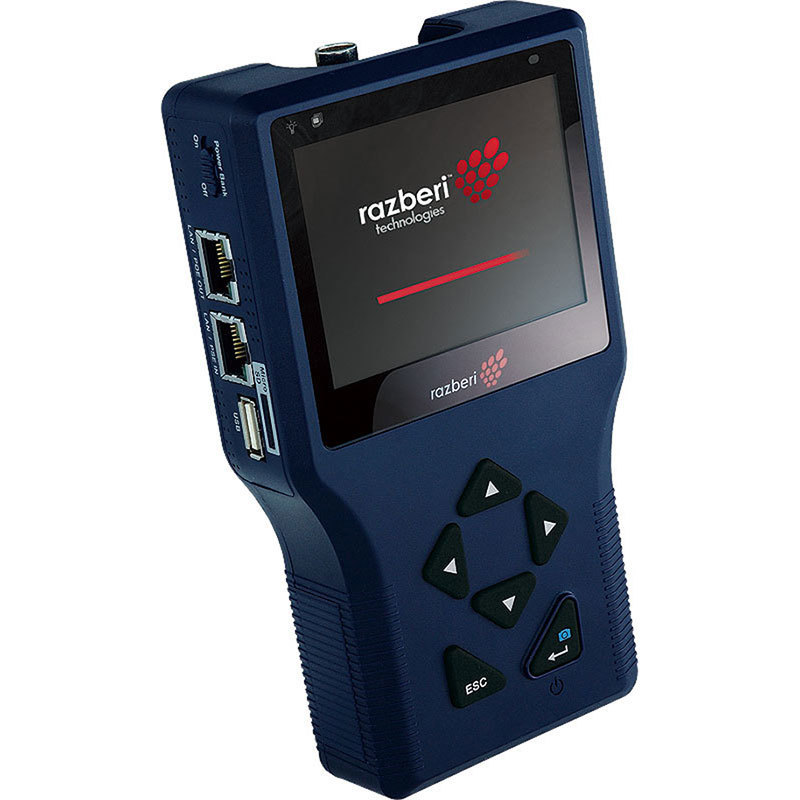 This may look familar as it closely resembles the Axis T8414. Indeed, both Razberi and Axis OEM their installation tools from Dynacolor [link no longer available]. As such, most performance specs (except for third party IP camera support) are shared between models. Dynacolor offers its own version but primarily through OEMs and not for direct sale to integrators.

For a quick overview of the unit, check out the IT-5000 video below:

Vs. the Axis Tool

The major distinction between the two products is that the Axis version is 'closed', only working with Axis IP cameras. Many integrators like the T8414, but it has limited value for those that routinely install several camera lines. Axis notes that they plan on adding ONVIF support in the future but no release date is set.

Pricing for the IT-5000 has been announced at $1100 USD MSRP, which will likely result in a similar or slightly higher price as the Axis unit. The Razberi tool is currently shipping and is available through distribution.

While the hardware and pricing is similar, Razberi's major advantage is support for third party IP cameras. For many integrators, this could be a deciding factor as it makes the unit much more flexible.

We have used the Axis and Dyancolor 'versions' of this tool and have some general concerns about its use.

Despite the tool's small size, using the tool is still a 'two-handed' operation. While the physical size of the device is smaller than a laptop, navigating commands and configuring the tool requires free hand use of a stylus and fairly precise pointing to manage operation. While the unit's ONVIF 'autodiscovery' function takes time, manually punching in a camera's IP address/device credentials with the stylus is equally as precarious and takes a longer amount of time than the equivalent time with a laptop.

Finally, the small screen size (3.5") and CIF (320x240) resolution make it difficult to finely focus high MP cameras. Given that a laptop's larger screen is a disadvantage when climbing a ladder, it also is a indisputable advantage when focusing high resolution images.

If you are looking for a laptop alternative for setting up IP cameras and are not an Axis only shop, the Razberi model could be quite appealing. Users should temper their expectations given the relatively high price (compared to a laptop or traditional analog hand held monitor) and usability limitations likely even with these units. However, this could be an attractive solution for those tired of using laptops.