The World's Most Demanding Surveillance Requirements

Qatar, the world's wealthiest country, is known for its opulence and may soon be for its mandatory first-rate surveillance systems. While many countries struggle with low quality, antiquated systems, Qatar seems intent on making every business in the country have world class surveillance. Indeed, recently, the government took control of specifications.

In this post, we review the details and share experiences from an integrator with first-hand experience working under the country's new laws.

In 2011, Qatar, created a Security Systems Department to regulate and oversee all security operations throughout the country. Last week, the agency launched a new website, which for the first time puts all of Qatar's government-mandated surveillance specs online [link no longer available].

For Qatar, it's not just about upgrading surveillance, the country also sees it as a national defense initiative, even requiring some cameras and control rooms to be accessible through the National Command Center.

Six manuals, available for download from the SSD website [link no longer available], describe the specifications in English and Arabic:

All cameras must be Megapixel IP, tamper and vandal proof and the system must store all recordings for a minimum for 120 days in MPEG-4 or H.264 format or better. Moreover, key required features include:

Additionally, control rooms must be monitored around the clock, year round and operators are limited to eight-hour shifts.

Moreover, the government requires very dense camera coverage across facilities, far more cameras than is commonly used even in professional systems. For example, in banks, these are just a sampling of required areas for cameras: 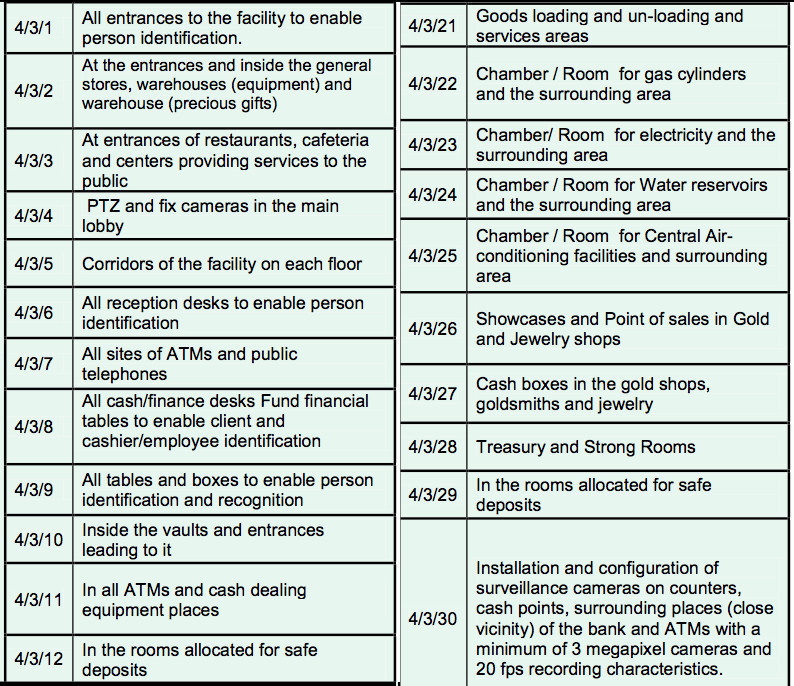 Before any construction can start, a company must submit blueprints, schematics and a proposal for its planned surveillance system to the Qatari Ministry of the Interior [link no longer available] for approval.

Our source learned through experience that there is almost no wiggle room in the new laws. However a few rare exemptions exist. For example, cameras must be IK-10 certified, but there is an exemption for the AXIS Q6035-E, which is IK-09 rated "they said it is close enough to IK10." 1.3 MP is listed as a requirement, but AXIS cameras are approved at 1.2. These exemptions may apply to comparable brands, he said.

Once a building is completed it is inspected, and if it is not up to code, businesses can be banned from opening for a year and subject to fines. Most government databases in Qatar are linked so problems with a surveillance system can have impacts across services. For example, one hotel is blocked from issuing tourist visas until its CCTV system is up to code. The same goes for renewing business licenses and billboard permissions.

For those companies looking to participate in this 'gravy train', be warned that Qatar has restrictions on who can own and work at security integrators. It will not be easy or simple to set up business there. However, manufacturers of higher end products may want to step up marketing efforts to local, approved companies.

There are clearly upsides to a mandating high-quality surveillance systems:

On the other hand, there are certainly negatives:

While we doubt this is a template for many other governments, this is certainly a fascinating case. What Qatar is mandating as a minimum requirement meets or exceeds what is used even in most of the wealthiest multi-national corporations.