One of the nastiest and most difficult to identify problems is insufficient PoE power. One minutes, things may be working fine. The next, the system seems to be going haywire, with little indication why. In this update, we overview the potential causes for these issues, and how to troubleshoot them.

Actual PoE power consumption of IP cameras may be difficult to determine accurately. Manufacturers often list power consumption in wattage on data sheets, but without external equipment, there is no way to verify this. Additionally, most do not show PoE class, which may be important in troubleshooting. PoE power consumption is divided into four classes, grouped by wattage, ranging from 0.44W to 30W. The class required by a given device is negotiated with the power source, either a switch or a midspan, upon connection.

Under normal circumstances, devices should request only the power they need. However, if a camera is malfunctioning, it may negotiate the wrong class of power, or may draw more power than was negotiated, both issues which can cause significant problems.

Most commonly, lack of sufficient total power is the root cause of PoE issues. Many switches, including most low-cost/small business models, provide only 7.5W PoE on all ports, but support up to 15W on individual ports. In the case of a 24-port switch, for example, total available power is generally between 180-190W.

Plugging in one camera too many typically does not simply shut down the switch, but causes intermittent issues. Since camera power consumption varies slightly while in use, cameras may work fine for a period of time, until total consumption exceeds power budget. This may occur at seemingly random times, day or night, and result in any of the cameras being lost, making the issue extremely difficult to pinpoint. 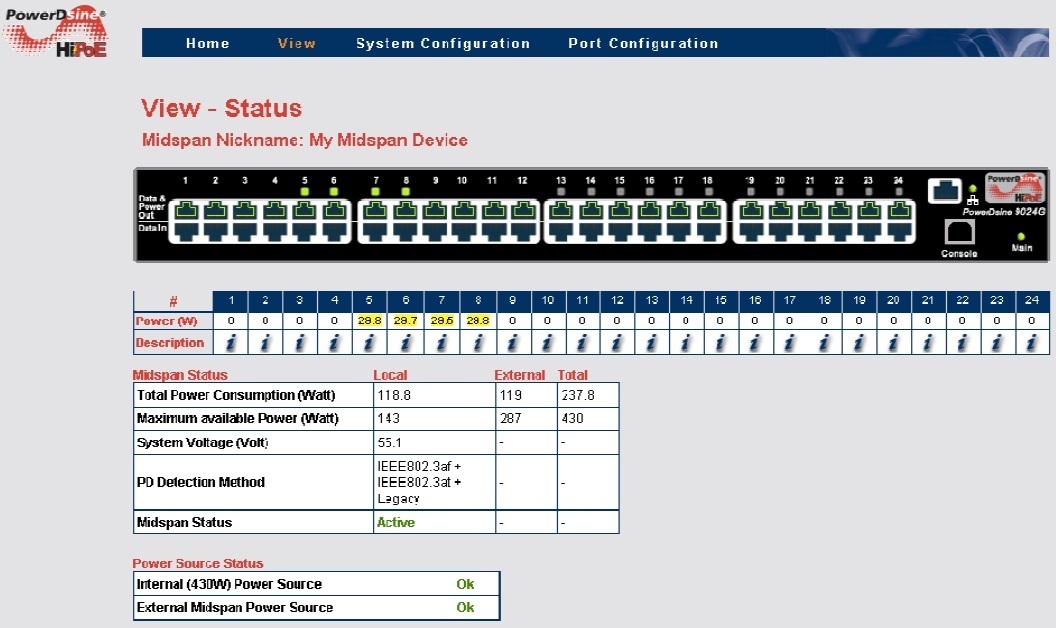 External testers must be used to troubleshoot PoE issues if unmanaged switches are used. These devices are connected inline between the camera and switch, and used to check actual consumption of individual ports. The Byte Brothers PoE Power Panel [link no longer available] (~$160 online) is one expensive means of testing this, though more expensive network analyzers, such as the Fluke NetTool [link no longer available] (~$2,500 online) provide this feature in addition to other connectivity tests.

When using managed switches, limiting the per-port power of certain ports may reduce issues. For example, in some cases, due to poor PoE implementation or malfunction, a camera may consume more power than it actually needs. Limiting this camera to only 7.5W power output may alleviate the issue system-wide. In other cases, however, the camera will not function on this reduced consumption, requiring either an individual midspan be used, or the entire switch replaced.

When using unmanaged switches, little can be done. Without a management utility, no power limits can be set. In this case, the switch must be replaced with a managed model, or a PoE midspan added.

Replacing switches with higher PoE budget models is not an inexpensive proposition, however. In most cases, among the major manufacturers, at least, 15W PoE capability on all ports requires moving to enterprise level switches with a much higher price. As an example, Cisco's 300 series managed switches (7.5W per port, 180W total) sell for about $500 online. Moving to the Catalyst 2960 to gain full PoE capability (15W per port, 360W total) is a price increase of about $600 (~$1,100 online).

The second solution is to supply PoE via a managed midspan, which allow the same power management and monitoring features of managed switches. 24-port midspans can be found online for $500-700. Based on these prices, a managed midspan combined with an unmanaged switch or low-cost non-PoE managed switch (~$200 online) will likely cost less than using enterprise-level switches. Additionally, an external midspan may be replaced if power needs increase, to current HiPoE and higher levels in the future.

PoE For Video Surveillance Guide on Jan 06, 2022
This guide provides comprehensive explanations of the elements in selecting...
Comments : Subscribers only. Login. or Join.