Multiple styles of PTZ are available, though little clear-cut guidance on which is best for a given application is available, making camera selection difficult for inexperienced users. In this note, we overview the three main types of PTZ cameras:

We discuss the strengths, weakness, and potential applications of each, below. 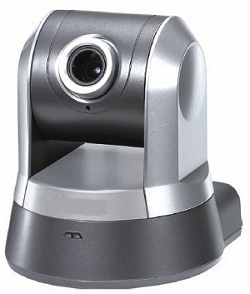 Some manufacturers also offer wall-mount PTZ cameras, which look similar to large cube cameras, as seen in this image: 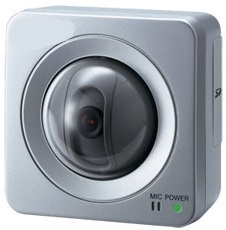 The main advantage of mini PTZ cameras is cost. Since many lower-cost manufacturers, especially in the SOHO/SMB markets, only offer this style of PTZ, they are typically among the lowest-cost movable cameras available. Some may be found online for as low as $200 USD.

However, in spite of, or likely due to, this low cost, there are a number of disadvantages to using this style of camera:

This grade of camera is only recommended for home or small office use, as they lack features which most commercial users would expect, most notably PTZ speed.

Speeddomes are similar to mini PTZ cameras, though normally packaged in more unitized dome form factors, with some additional features. This image shows a typical speeddome with wall mount: 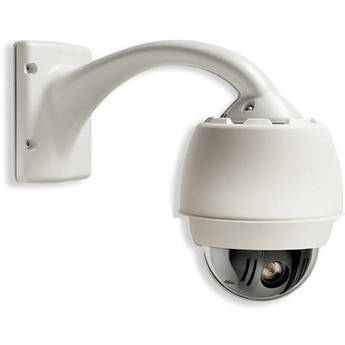 There are several advantages to using speeddomes over other types of movable cameras:

For all these benefits, there are two key factors which may affect their use in some applications:

Pan/tilt positioners are the oldest type of movable camera system, available prior to integrated PTZ cameras. These systems consist of the positioner itself, integrated with a separate camera and zoom lens. The following image shows a typical pan/til positioning system, with wall mount: 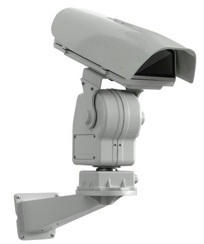 The key advantage to pan/tilt positioners is flexibility. Users may choose from multiple cameras and zoom lenses, instead of being limited to available speeddome options. This is useful when extremely long-range zoom lenses are required, as megapixel lenses up to 60x are now available.

Positioners present some unique challenges, however:

Positioning systems most often see use in critical infrastructure, shipping ports, and military applications, where long-range zoom is required.