While Organized retail crime captures big headlines and claims of billion dollar losses, is it really the problem it is made to be or is it wildly overblown? For retailers nationwide, ORC is the hottest of hot button issues and has gained national recognition as a significant source of retail loss. In this note, we examine the claims that ORC is the biggest loss risk to retailers.

For problem definition and a background on common defenses against ORC , see our 'Organized Retail Crime Countermeasures' note.

ORC is a new label applied to existing problems: In the world of Loss Prevention, ORC captures attention. In part due to substantial publicity, most retailers now suggest that they are victims of ORC. The label evokes the impression that massive ORC rings are planned and executed by sophisticated, underworld gangsters in a highly disciplined effort. This imagery has captured the attention of retail executives in a way simple shoplifting cannot. Nationwide, retailers are scrambling to address the problem, many for the first time. Needless to say, the influx of new money and intrigue has provided many LP departments a new avenue to address age-old problems.

Many retailers apply a general, non-standard definition of 'ORC' when categorizing root cause, and lump together common shoplifting and logistics thefts into the more eye-catching, sexy 'ORC' category. The end result: widespread overstatement of an existing problem into new terms. Even the National Retail Federation expresses difficulty defining ORC due to the ambiguous definition adopted by different retailers.

The losses associated with ORC are overstated: While ORC is widely reported to be a $30 billion problem, following more stringent definitions yields the problem is much smaller, with some claiming as little as $3 billion to $500 million. This disparity reinforces the need for standardized metrics to quantify the loss.

The risk in overstating the impact of ORC can draw attention, energy and resources away from dealing with the real threats. For example, varying opinions exist whether 'employee theft' should be considered part of the ORC problem. However, 'best practice' methods of dealing with employee theft are entirely different than confronting external threats. The same dynamic applies to gift card fraud: mitigating this issue follows a different plan entirely than protecting showfloor merchandise. Where should retailers spend their money for protection? Is it really useful to lump both crimes together in the same category? When vast sources of shrink are labeled ORC, yet are not subsequently diminished by misapplied 'anti-ORC' efforts, it undermines the true effectiveness of the technology being applied. Having an accurate understanding of 'how much loss is occuring' is vital for security countermeasure planning.

ORC is a geographically specific issue, not widespread: While hotspots exist, broad portions of the US lack sustained evidence of ORC activity. Vast populations exist where no defined threat of ORC has been noted, yet it is characterized as a nationwide issue. The map below indicates the cities where ORC is reported to have the most significant impact: 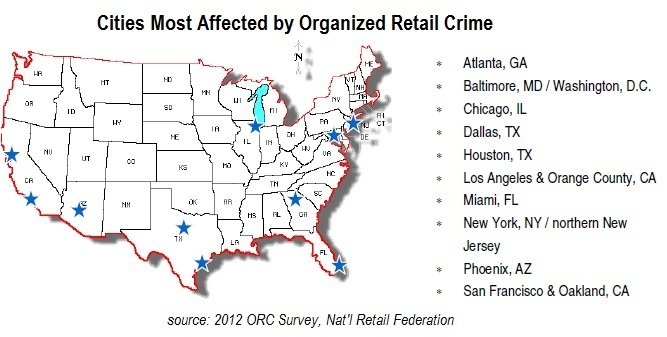 While the risk of ORC can be quantified in certain areas, the danger is in oversimplifying 'the problem'. Rubber stamping an action plan based on an arbitrary assessment of 'a nationwide problem' is bound to fail. Effectively cracking down on the problem means understanding it at a local level. Several high-profile LP Professionals relate the importance of working with local Law Enforcement on a regular basis in order to have sufficient risk awareness in place for their stores, and a risk for one region is not necessarily the same in all regions. Overhauling loss prevention systems to combat ORC in locations where ORC is not a risk could be expensive and unnecessary.

Retail security system selection is driven by perception of risk. While many retailers are evaluating themselves to be inadequately prepared to deal with the threat of ORC, many existing security systems are being adapted and enhanced to address the issue. In numerous cases, as we cover in our 'Organized Retail Crime Countermeasures' note, retailers are not faced with 'reinventing the wheel' when confronting ORC, but are doubling down on existing systems like EAS, CCTV, and Data/Video Analytics for defense.